King James sat and stared into the tankard that had just been reverently placed before him. Divine Right of Kings was one thing, he thought. Drinking this might enable him to meet his maker sooner rather than later. He was sure that something had moved down there.

Nevertheless, he raised the cup to his lips and sipped. He caught the proprietor’s eye and smiled. She relaxed and more tankards of the stuff were produced for the courtiers, captains and general hangers on.

It had, overall, been a good day. If you have to fight, James mused, it is as well to fight and win. The lancers had done well. The Borderers had done badly. He must look into the background of the captains. On the other hand, the rebel’s Border horse had also run away. Perhaps they had colluded. It would not be without precedent.

Without thinking about it he took a swig of beer. Actually, for a provincial tavern, it was not too bad. And anyway, he was still alive. Someone, now residing at his pleasure in Edinburgh Castle, had pointed out to him that both his grandfather and great-grandfather had died as a result of fighting the English. Maybe that bit of family history was over. Mind you, he had been fighting his own people rather than the English, here, and he was going to help his cousin’s forces.

Another resident of Edinburgh Castle had also inquired whether the price for his intervention was going to be the freedom of his mother. James was not entirely sure that Mary would still be alive. If it were him on the throne of England, she would have died years ago. Elizabeth, he knew, was a lot less sanguine than he was about killing monarchs. Perhaps that was the English way; few enough Scottish kings had died in their beds in recent centuries.

‘We found him in the stream, my lord. He is a bit wounded and very muddy.’

‘Throw a couple of buckets of cold water over him and bring him in.’

A few minutes later there was a commotion at the door, and Lord Maxwell, sometime rebel and defeated general was hauled in, dripping mud and water on the floor.

‘I protest! I am a Lord of the Realm. You cannot treat me like this!’

James sighed. ‘Maxwell, I can treat you however I like. You need to come up with a very good reason for your behaviour today.’

‘I am trying to save the realm! We are sunk in iniquity and have turned away from God and his church! I would stop you from making the greatest mistake, aiding the heretic against the armies of God! Repent of your sins and the sins of the nation. Return to the true faith. Aid the Spanish and their crusade to root out this heresy.’

‘Maxwell, you sound like a Protestant preacher, not a Catholic rebel. Be quiet, or I shall silence you myself.’

‘What shall we do with the rebel, sire?’

‘I suppose we shall have to do something. Chain him up and send him to the Castle. I will decide later.’

‘Do you have orders for the army, sire?’

‘Yes. They are to camp on the other side of the stream this evening. We continue our march south tomorrow. And send as much beer out to them as the burgh has.’

*
As you can probably surmise, the royalists won the day at Coldingham. To refresh your memory (it is a while since the scenario was posted; I had to paint 12 bases of Scottish infantry before playing it), the battlefield is below. 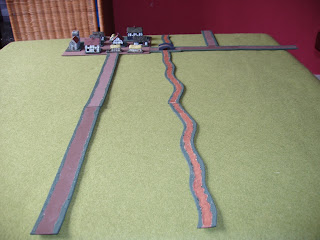 The rebels enter from the right, the King’s forces from nearest the camera, the north, and aim to exit on the road to the south. The key point is Coldingham Burgh, of course, with the old priory (taken over as the parish church) to the left.

While aware of each other’s presence, the two armies are not deployed. The rebels had the slightly shorter march to Coldingham and so arrived first. The initial contact looked like this. 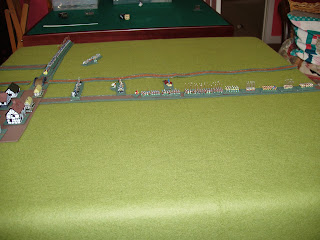 Both sides put their cavalry first, and the initial clash went the rebel’s way, but the King’s heavier cavalry put paid to their opponents, including the rebel general (who survived two goes at him, but succumbed when his Border horse base fled).

General-less the rest of the rebel army struggled to deploy and only the musketeers managed to enter Coldingham, while the highlanders guarded the stream. James deployed his men  in a relatively leisurely manner, and heavy musket fire broke out in the village, while the lancers entered it from the east. The rebel infantry was very stubborn, yielding only slowly to musket fire and charges from the lancers. The highlanders attempted to storm the stream but, after initial success (highlanders do not rate well in these rules, and attacking across a stream is bad news anyway) were defeated. This broke the morale of the rebel army. 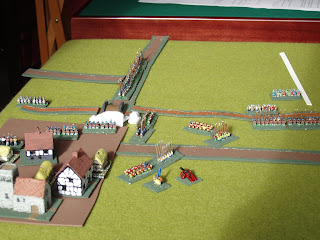 The picture shows the final positions. The King’s cavalry and musketeers are in control of the village, and one of the highlander bases is routing (by the measuring stick). One rebel musketeer base is still extant, having retreated across the stream. The rebel pikes have not managed to deploy. The rebel dice throwing was interesting, to say the least, and they rarely had any tempo points left over to do anything, like deploy.

Overall, it was a good and interesting game. I thought it was all over after the initial cavalry clash, but the Scottish musketeers did prove very stubborn, benefiting from the cover of the burgh and holding out for a good number of turns, even if they were not deployed (and so could not shoot back).

Anyway, King James continues his march south. Now I have to invent some suitable naval rules and see if Don Pedro obtains any reinforcements.
Posted by The Polemarch at 02:00