Phew! Just Made It

Now I hope you are aware, as my regular reader, that I am not one to crow or show off, especially about my painting ability. However, over the last two years or so I have been trying to climb Mount Impossible, also known as reducing the pile of unpainted toy soldiers by a significant amount. This was sparked, in part, by the Estimable Mrs. P observing, recently, in her usual Delphic manner, ‘Unread books are useless, and unpainted soldiers are useless.’

Guilty on both counts. One might almost think that she knows her husband reasonably well, and knows where to strike for maximum effect. On the other hand, she has provoked a spate of reading, as recent posts will show, and some painting, which is the focus here.

Last year, my noble reader will recall, I managed to paint a total of 1024 little men. This reduced my lead pile to 845 toys, the difference the eagle-eyed will have spotted is accounted for by the 179 Muscovites which were added to the pile and painted in the same year (Shock! Horror!). That left me with about 1500 left to paint, of course. 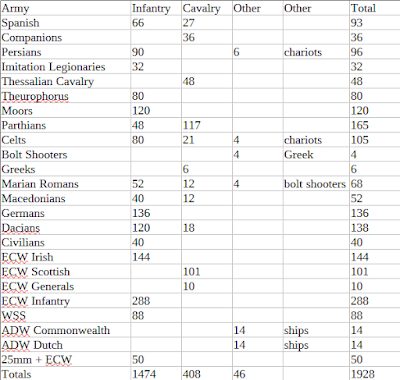 The screenshot above shows the 1928 outstanding items at the beginning of my painting year (October 2021). Before anyone observes that there are more than 1500 or so items accounted for, I have added in the yearly purchases, this time of 288 ECW infantry from Lord Baccus, which appeared at Christmas, and the 28 ships for the Anglo-Dutch War which came in February. It is no wonder that reaching the bottom of the lead pile is a receding target. I have also added in the fifty (or so, they are a bit tricky to count) 25 mm plus figures I came across buried deep in a box. Such is the lot of the wargamer, I suppose. You hide these things away from your nearest and dearest, and yourself, and then, years later, they magically appear to torment you.

Still, I did set about my yearly target of 1000 figures with some modicum of enthusiasm and reported some reasonable progress by the mid-point of the painting year. I did get a bit stuck with the ADW ships, as was also noted at the time, and my claim is that without these I would have done even better. An excellent argument, I can claim, especially as it is impossibly to disprove.

Those of you who are waiting for the detailed result with bated breath (is there anyone) will be relieved to know that my spreadsheet skills have been kept up to date by creating the following. 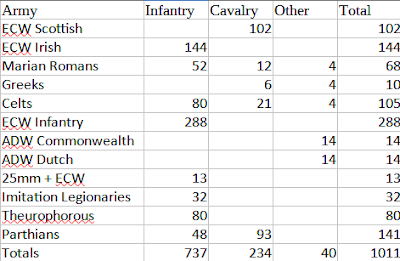 What you can see above is the near exhaustion of my stocks of ECW troops. The Irish foot, who had been hanging around for a couple of years, was completed and took part in the Benburb game. The outstanding Scottish cavalry was also finished, with some of them being contributed generously to the Irish as well. As I noted I did manage the ADW ships, who have appeared (some of them, at least) in action, and also a few of the biggies which have been painted and/or repainted.

For the rest, I have been rounding out assorted ancient armies. The Marian Romans got skirmishers, cavalry, and bolt-shooters. The Greeks got cavalry and bolt-shooters. The Celts got skirmishers, tribal foot, some extra light cavalry, and some chariots (you can never, in my view, have enough chariots). I also finished off the imitation legionaries and unpronounceable Greek foot for the Pontic army. They did not particularly need them, but there you go; it is nice to have the option. The last lap has been to tackle the Parthians, which in fact were not touched by the doubling project of a few years ago, and therefore had been languishing with only twenty bases. They have now been augmented by 7 bases of cataphracts, 12 of skirmishers, and, so far, 12 of light horse, with another 6 bases undercoated and awaiting painting. Not that they are all based as yet, but I count painted as finished, or I would go mad.

So, I hear you cry: ‘What of the future?’ Good question, and I am glad you asked. The current total is that I have 990 figures left for the coming year. If I manage to outstanding 24 Parthians, that will drop to 966, so obviously I am going to have another push at the ancients. I shall probably start with the Dacians, as they are the current biggest unpainted pile.

You might wonder, incidentally, where the figure of 990 comes from. If you subtract 1024 from 1928, as in the total above, you get 904. Well, all I can say is that the wargame figure fairies have been active and have mysteriously added 72 Celtic tribal foot. I discovered them in the same bag as the Parthians, and I have no idea how they got there. This is, I suppose, another hazard of having a lead mountain: things get mixed up.

Now, of course, rumour has it that when a wargamer has finished their pile of unpainted lead, they die. Fear not, gentle reader, for I have undertaken further investigations of my storage boxes and have unearthed another 554 1:72nd scale medieval figures, from assorted manufacturers. I do have, somewhere (in another pile of storage boxes inevitably) some painted ones, nearly enough for a DBA army, I think. I suspect the project ground to a halt because of a bit of a lack of bowmen, but I cannot remember. Certainly, the Robin Hood figures seem to have had their archers thoroughly looted, so I presume they were painted. I must have a look sometime.

So there you are. I know 1000 or so 6 mm figures is not much by some people’s painting standards. I saw someone who had done 3000+ last year, and to a far better standard than I can dream of. But I do keep plugging away and, hopefully, as the lead pile diminishes I will start to feel less guilty about spending my hobby time playing games rather than painting.