‘Are you still painting those ships?’ the Estimable Mrs P enquired one morning.

This elicited a snort from the spousal direction. ‘You don’t do bling.’

As you might have surmised by occasional grumbling on this blog, the painting of the Anglo-Dutch Wars ships has not been proceeding quickly. It seemed like a fairly straightforward task – fourteen 1:2400 scale ships per side. Starting in February, I reckoned I would be finished by the beginning of April. It is now the end of May and I have just about staggered over the finishing line.

Do not get me wrong: this is not the fault of the models themselves. They are perfectly good scale models of the ships of the time. It was just that your humble correspondent had some problems, in particular assembling the models.

The Tumbling Dice Anglo-Dutch Wars ships which are the subject here, however, have cast on masts and sails to be attached using glue. The Estimable Mrs P was dispatched, on her next trip to the Post Office (which is in a hardware store, so it does make sense) to obtain some superglue. Fun and games ensued as I attempted to superglue the sails to the masts. The problem was that the masts, being vertical, ensured that the superglue ran down them and out of the joint before it could start to set. Hence, a lack of adhesion and much frustration from this poor modeller.

After a bit of experimentation, an alternative was found, consisting of partly dried PVA glue held in place by my unsteady hand until the sails were glued sufficiently to hold themselves in place. This was a bit hit and miss, and occasional sails were displaced by ineptly placed thumbs while attempting to glue the next one in place, as well as some sails, apparently being firmly glued in place not being so, and requiring the application of more glue to strengthen the joint. Batches of four were as much as I could manage, with one set of sails per ship (there were four sail sets – mizzen, main and foremasts, and a bowsprit sail) per day. Painting, after that, was comparatively simple, although there was always the danger of loosening the sails while undercoating. Extra coats of glue were eventually applied.

Painting complete, attention was then turned to flags. Now at 1:2400 scale, flags are rather small, as you might imagine. Initial experiments of wrapping the flag around the mast worked (especially when I discovered that the flags were adhesive-backed) but looked, in all honesty, a bit off; there was no room on the flag for a bit that wrapped around the flagstaff. They looked OK, but even your erstwhile bad modeller was not too happy.

Next up I tried wrapping the flags around a bit of five amp fuse wire and then supergluing the assembly to the mast. This looked better and, using tweezers, I managed not to superglue myself to anything. It was still fiddly, however, and I needed to paint any sticking out bits of fuse wire in order to make it look like rigging. An improvement, but not gold yet.

Finally, I figured out that I did not need the fuse wire, and simply scored the flags, cut them out, folded them over (removing the backing paper was probably the most fiddly part of the operation), and then glued them directly to the mast using PVA, the superglue having glued its own lid onto the tube in a hissy fit at not having been used properly (either that or me not having wiped the nozzle sufficiently at the previous last use). Being light the flags took the glue very quickly so my wobbly hands managed the task quite adequately (for me, anyway).

Then, liking the look of beflagged ships, my eye fell on the smaller items which had been painted first: cromsters, yachts, and hoekers. The flag sheets came with even smaller flags, and, flushed with success from flagging the fifth rates and above, I scored, cut, and stuck even smaller flags to the little ships.

So now, I present to you, the fruits of my labour. Do not look too closely, but I think they will do for wargaming models. Dutch lights nearest, then Dutch capital ships, British capital ships, and then the British lights, somewhat obscured.

In other news, I was rooting through some of my deep storage boxes the other day and came across a castle, which I had made up and painted years ago. Having started to repaint (finish and/or start over) some of my 25+ mm ECW figures, I retrieved it, even though it is, in fact (as I recall) the Airfix medieval castle. 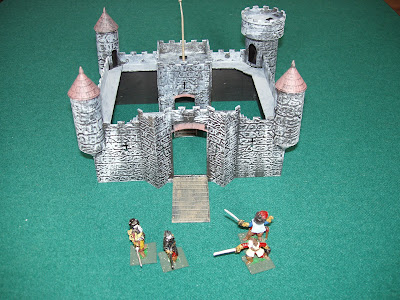 Here we see the offending article with the newest re-recruits in front. As I recall the figure top right is a Redoubt French Musketeer figure, and the others are old Wargames Foundry. All I can say is ‘En Garde!’

All of this has left me wondering what the point was. I had a plan, even though it was a bit vague for these ships and the big figures. I think it was to do with Corbie; somewhere I do have a figure who was slated to be the English ambassador who was being escorted to the coast with the vital treaty which would bring Britain into the war against the Spanish and avoid the English Civil War. And of course, there would then be a chase at sea….

Things move on, of course, and I am now considering an idea I saw years ago, probably somewhere in Featherstone or possibly in Setting Up A Wargames Campaign of an island-hopping amphibious imagination campaign. Have ships, will travel.