‘The cavalry will advance and collect those ships, while the infantry will sail over there and make sure the clog wearers do not capture the islands.’

‘Um, general, those are ships and not infantry or cavalry. The cavalry are sixth rates, the infantry you describe are fifth rates, the Lion and the Unicorn.’

‘Captain, you are a sailor, I am a soldier. It is your job to translate my orders. Get on with it.’

You know what it is like, I am sure. You have a nice set of newly painted toys and you are itching to get them onto the table. But then a problem arises: you have no real idea what you are doing. Further, it turns out that you have no rules that particularly appeal to you. What is a poor solo wargamer to do?

Obviously, short of buying endless rules and engaging in indecision and procrastination, the answer is to sit down and write some rules and still get the toys onto the table. With the Anglo-Dutch Wars ships that is exactly what I did. I was somewhat dissatisfied with the rules to date, and so I stole (I beg your pardon, used as inspiration) the Eighteenth Century Naval Rules from Arthur Taylor’s Discovering Wargames book (which is many years old) for the sailing and weather rules, and my own bits for the combat rules. I find that I really do not like the endless accountancy that most naval wargame rules seem to require.

Next up was a scenario. Reading a little about the outbreak of the First Anglo-Dutch War I came across an incident which seemed to fit the bill, particularly as, as a first outing for the rules, the forces could be small. The Scilly Isles were a base for Royalist privateers in the late 1640s. They even had a court there for the disposal of prizes. As the principal commercial maritime power, this annoyed the Dutch considerably, and so, in 1651 or so (I forget exactly) they dispatched an expedition to the Scillies to recover their vessels.

This move did not go down well with the Commonwealth government, which was attempting to negotiate an alliance with the Dutch at the time (and which was being roundly snubbed to boot). The two governments had wildly different ideas about what they were doing. However, the Commonwealth believed that the Dutch were attempting to set up a naval base on the island, with the connivance of the Stuarts, and so dispatched their own expedition to stop it.

This is the start of my scenario. In real life it did not result in a shooting match but, in my world, it could have done. The first job was to create some islands in 1:2400 scale, and then I had to choose the forces. 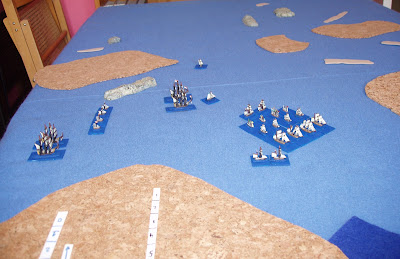 The picture shows the game at about move six. The Dutch appeared on move two in St Mary’s Sound. They consisted of two fifth rates, Leeuw and Eenhoorn and four hoekers, sixth rates (which I did not get around to naming). The two fifth rates are mid-picture, two of the hoekers are nearest the camera, about to cut out some merchantmen, and the other two are just boarding some of the others.

The Royalist guard ships are hanging around the other safe passage out of St Mary’s Harbour, Broad Sound which runs south-east to northwest (hence, the camera angle is roughly from the north). The Commonwealth ships arrived on move five. With four sixth rates upfront and two fifth rates (Lion and Unicorn) nearest the camera.

The wind was force 4 during the game (it can change every eight moves) and blowing north to south (this changed slightly to NNE to SSW). Ships cannot sail closer than 45 degrees to the wind and cannot change course across the wind. This caused both sides a fair bit of bother during the game as the sea room is rather constricted.

The ships are mainly my new Tumbling Dice Anglo-Dutch Wars vessels. The Royalist cutters and some of the merchantmen are Hallmark, the rest are Tumbling Dice. Each smaller merchantman counts as one point for the side that holds it at the end of the game, the big ones count as two points. To capture a merchantman a ship has to come alongside, wait for a move while the merchant is boarded and then move off when the merchant can then move. Captured merchantmen will immediately surrender if shot at or boarded by a different side.

This was a fascinating game. As I mentioned, the problems of wind and sail in a confined space made movement interesting. The rules kind of worked although I am not sure of the gunnery – it probably needs a bit more refinement. 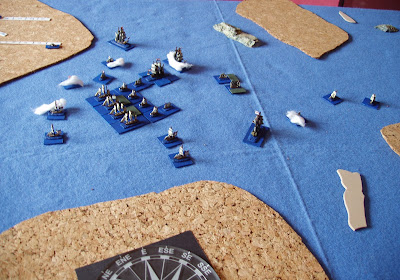 The picture shows the key point of the game. Two merchants have been boarded by the Dutch and are proceeding, in the middle of the shot, to escape, although they will actually be recaptured by the Royalist guard ships shortly. Two of the larger merchants have also been boarded and are about to set sail to escape (the green counters show Dutch controlled merchants). Most of the Commonwealth sixth rates are sailing into the wind and exchanging shots with the Dutch sixth rates.

The main action is in the centre where the Leeuw, perhaps foolishly (and possibly as a result of my bad seamanship) has boarded another merchantman. However, the Unicorn has got to aft and has just raked her, crippling Leeuw.

For the rest of the game, the Commonwealth sixth rates recaptured the larger merchantmen while the Dutch sixth rates used the narrow channel to the north to escape. Eenhoorn exchanged broadsides with Lion and Unicorn, receiving one hit but inflicting two on Lion. The crew of the Leeuw boarded the merchantman they were in contact with and made off, while Unicorn sailed down on the Royalists and their prizes and the Royalists surrendered.

As the rules were new I do not think it was a bad game. Most of the gunfire was ineffective – it is done on matched rolls and the size of the vessel; the sixth rates did not damage to each other or any other vessel as far as I recall. The combat between the fifth rates did create damage, so that seems as it should be. The sailing rules took a fair bit of getting used to and frustration from this landlubber as the Dutch fifth rates could not turn to face the Commonwealth ships in time. We live and learn.

‘The governor of the Islands has offered to surrender to you, sir.’

‘Excellent. I can’t wait to get onto dry land.’

‘The Dutch ship has surrendered as well, sir. It seems to be sinking.’

‘A little, sir. We’ll send some men and pumps and see if we can help.’

‘Well, sir, it is a bit like having a waggon shed a wheel on a road on land. It gets in the way a bit. That ship is in the main anchorage and so it would be a bit inconvenient.’

‘You mean you want us to park there?’

‘Did you sigh captain? I distinctly heard a sigh.’

‘Must have been a seagull, sir.’