The Bogged Down Painter


Well, I have been trying to reduce the unpainted lead mountain. As the long-term reader of this blog might remember, the original pile started out at around 2500 little men, and was then reduced by 1000 last year (1024 for you pedants out there). This left around 1800 toys to paint.

You might question my maths, but some were added – Muscovites and assorted buildings and fortifications. So, this year, the aim was to reduce the lead pile to under 1000. Now, for reasons I do not recall, my painting year starts sometime around October, and it is now March, so six months or so down the line how is it going? 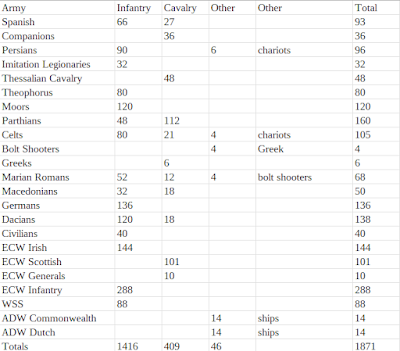 The above shows, sort of, the state of play in October. The sort of caveat is because three of the rows listed above are later additions. I have the misfortune to have a birthday near Christmas. As a child I regarded this as a terrible tragedy, as relatives would contribute to the terrible ‘Christmas ‘n’ Birthday present’, which meant that for one of the events you would receive nothing. It could have been worse – I was due on the day before Christmas Eve but was several weeks late.

Anyway, the original total was around 1555, and that was augmented by 288 Baccus ECW infantry, because I kept running out, and the Commonwealth and Dutch Anglo-Dutch Wars fleets. These are the starter packs in 1:2400 scale from Tumbling Dice. So, as you can see, a fair stack of toys yet to go. I also keep turning up extra bits and pieces tucked away in various boxes, hence the addition of some ECW generals. There are a few more bits as well, as I empty more boxes and trays they will come to the foreground.

Still, the original plan was to paint around 750 little men, to halve the unpainted lead pile. With the advent of the ECW infantry, that was increased back to 1000. The ships I do not really know how to account for, so they are in the ‘other’ column, along with the chariots and blot shooters from the outstanding ancients.

How, you might wonder, am I getting on? Well, the current state of play, as per finished toys, is below.

This shows reasonable progress, I think, although as I might have mentioned, I have got a bit bogged down.

The Scottish cavalry have been painted as some Irish (with green bonnets) and Scots. The remaining Scottish cavalry are lancers, whom I have not got around to daubing yet. The Irish infantry are the other half of the six regiments that I painted, I think, last year. You might wonder why I have six regiments, but that is the way Baccus sells them, and I do not like to ‘waste’ figures.

The ECW infantry were the Christmas present, and I was determined that they would not sit in the package or draw for two years before I got to them. After all, I have mentioned a couple of time that I keep running out of pikemen. I suppose that, on reflection, I could have made up the numbers by using my copious quantities of Scottish and Irish infantry. I suppose I am a purist by nature. Either that, or I am subconsciously planning bigger ECW battles.

The rest of the figure painting has been a bit of seeing what I can do reasonably quickly. As noted, Julius Caesar suffered a bit from lack of cavalry and of skirmishers when he invaded Britain last year. The Marian Roman painting was the outstanding slingers and strictly Roman cavalry from the lead pile. The Greek cavalry came along for the ride, as it were, and were painted at the same time.

The Celts were painted as it seemed a bit unfair to paint Jules’ reinforcements without some Ancient Britons. They too got skirmishers and (light) cavalry, but the bulk of the foot are extra warbands. I suspect a good tribal army can never have enough of those. I would like to get to the chariots and Roman (and Greek) bolt shooters, but they are a bit more fiddly. Speaking of fiddly…

The ships that have been painted are the smaller ones in the starter packs – yachts, cromsters and hoekers. I find that I can paint these fairly quickly (because I have low standards and they are small). However, I now have got to the fifth rates which require some assembly – sails, in point of fact. My record on sticking things together is not good. I tend to use enormous quantities of glue and, when super gluing things, stick everything to everything else, except what was intended. I have attached various items to my fingers, of course. The last lot of ships I renovated were glued with PVA, which was OK but the masts needed lengthy support.

As part of the deal which acquired the ships for my birthday, superglue was also supplied. Now, I am old enough at this game to know that superglue, of whatever brand, is pretty well a one-use tube. By the time I get around to using it again, the superglue has superglued itself to itself, to the tube and also to the nozzle where it was supposed to emerge. So the current plan is to prepare all the bits of ships, sails, chariots and bolt shooters I can, prime the parts that need priming, and then have a superglue fest.

The other thing to add to the list are my recently rediscovered 25/28/31/35 mm figures, the aim of which were for skirmish and role-playing games. I never got that far with them, but some are painted to an OK sort of standard, some are in the throes of being repainted, and quite a few dismounted cavalrymen from Redoubt Enterprises (do they still exist?) are still in bits and need, guess what, supergluing together.

Then I will need to work out a rate of exchange: how many 6 mm figures constitute one 28 mm figure?