A One Hour Wargame

Casting around for a battle, I ordered up Neil Thomas’ One Hour Wargames, and started to look at the scenarios. My eye lighted upon Scenario 23 (p. 110-1) which was based on Yellow Ford (1598). As I have ECW Irish in abundance, and have just finished six regiments of ECW English, I thought this was a rather splendid opportunity to get the English onto the table and to get the Irish out again.

Having further pondered, I thought I would give the pike and shot rules in the book a go. I was only momentarily disconcerted by the discovery that my table is only 2’ 6” square, instead of the mandated 3’, but decided on reflection to ignore the fact. 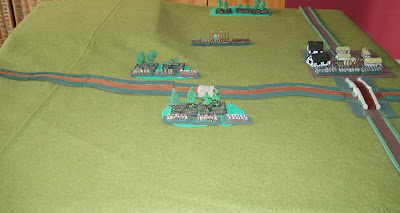 The picture shows Blue’s deployment. The Irish rolled two infantry units and the other two were irregulars, which are bow armed according to the scenario. This is a bit interesting as it shows that the efforts to keep troop types down to four is not always going to work. Anyway, one regiment of foot is in the town, one is in reserve, and the irregulars are in the woods.

The English wound up with four infantry regiments, a reiter regiment and a swordsmen regiment, which I interpreted as polearms. I deployed them on turn one, as directed and the re-read the rules. This meant that I swapped the swordsmen from fronting the wood to fronting the town. 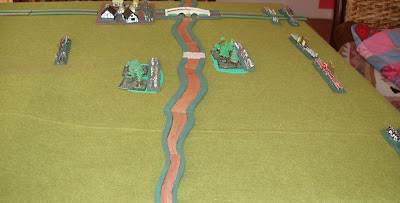 You can see that three of my bases make up a Neil Thomas unit – three 40 mm wide bases are nearly 5”, and the rules say 4-6” per unit. The rules only cover three sides in the book, so there is quite a lot missing. For example, how do units cross the bridge or fords, or move along the road claiming the bonus. I probably interpreted this erratically. The road bonus was given, and units could cross the fords without penalty.

It has to be said, the rules are fast, furious and rather bloody. The self-conscious lack of morale rules ensures that units hang on until they are eliminated. The out of ammunition rules mean that infantry units have to close into combat quite quickly. There do not appear to be any rules for withdrawing from close combat and being relieved, but we live with that.

There was also some ambiguity in my head when the reiters flanked to reserve Irish infantry. I decided that despite the rules they would charge (I mean, who wouldn’t?). They inflicted a lot of damage, but it was not clear whether that should be halved and doubled (i.e. as rolled) or doubled simpliciter. I chose the latter because, well, cavalry charging the flank of an infantry unit should get some sort of pay-off, surely. Maybe that was wrong. 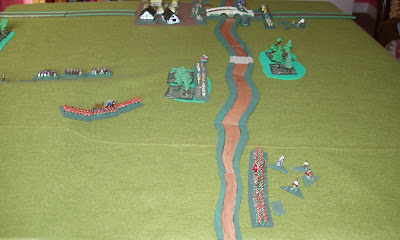 Unfortunately, the ‘crisis’ picture turned out a bit blurry, but the final positions are above. The reiter on the left have disposed of their opponents. The English infantry in the centre have eliminated the forward irregular unit in the wood. The swordsmen, after a hard fight have done away with the Irish regiment defending the town, also after a hard fight. The only Irish unit remaining is in the central woods, and they have not really been in action. However, the English can exit three units on the road south now, and that is the end of the matter. They won.

I did rather enjoy the battle, even though, pace the book title, it took only about half an hour. The speed of movement took me rather by surprise. Even though there were no cavalry on the table (12” move) 10” and 6” are pretty speedy on a three-foot table. I was also not sure about the turning of units and whether the reiters should really have managed to crash the reserve Irish foot in flank.

As for the rules, well, they are what they say on the tin: simple without being simplistic. What is missing, I think, is a lot of the detail which takes up room in wargame rules, such as moving along roads, turning to face the enemy and interpenetration. The fact is that if you commit to hand-to-hand conflict, you are staying there until one side, or the other, is eliminated.

I suppose the best characterisation of the rules is “Bang! Bang! Bang! Bang! You are dead”. Each unit has a strength of 15 points and loses them in combat. As combat is by roll of D6, you get four or five turns of it before the poorer roller is eliminated. Shooting is a bit more problematic. Thomas has a rule where a unit shooting rolls a second dice and has a one third possibility of being declared out of ammunition. My problem is that from my reading of pike and shot warfare this did not happen very often. I suppose it adds to the randomness of things.

I was also a bit puzzled by the swordsman category of troops. While there were occasional polearm armed infantrymen or sword and buckler men around, they were not that numerous. Some of the fun stuff of the period is also missing – the interaction of pike and shot, dragoons, artillery and so on. I know that this was done for a reason, and a good reason, but I rather missed them. The difference between reiter and cavalry is also, in my opinion, overblown. But then I do not really believe in the caracole as a mainline cavalry tactic anyway.

The scenario was a good one, however, and I shall be playing more from the book, probably using my own rules. Having seen how the book’s rules work I can recalibrate the scenarios to my own efforts and make them work quite nicely, I think.

Overall, a very worthwhile book and battle. I shall probably have some more general comments in a bit.