‘Mummy is on the beach over there’

‘Yes sire. We think your best plan is to get onto this little boat and slip through to her, while we distract the enemy.’

‘But I should arrive in style.’

‘Yes, sire. But it is better to arrive than not.’

‘You think that is a possibility if I stay on board this ship?’

‘They will be in the thick of the action. Certainly, if you wish to be a hero, leading the triremes is your best idea. But if you wish to make it to that beach, slipping around the flank is best.’

Alexander IV, Alexander III’s son (aka ‘the great’, or ‘the mad’) has been partying on Ibiza for quite a long time. It is clearly an opportunity to get him moving again when I noted that my supply of pictures of my ancient galley fleets was limited (to the point of not having any). Roxanne, his mother, had tried and failed to send him reinforcements while he was on the Balearic Islands, so Alex had to make the next move. Scraping together a fleet of merchant ships, triremes and penteconters, he set sail for Italy, where Roxanne had based herself.

Clearly, the Graeco-Italian cities are not going to be impressed by the advent of Alexander’s son in their midst. Such people cause problems. Therefore, they have moved a small fleet to prevent Alexander from being reunited with his mother. As Alexander’s fleet approach the rendezvous, they spy the Greeks and clearly there is going to be a fight.

The initial dispositions are above. Alex’s fleet appears in the top left corner of the table, and its objective is the bay at bottom right. The Greek fleet consists of five triremes lurking among the rocks on this side, another five on the far side, and a screen of penteconters up front. Alex’s fleet consists of five penteconters, five merchant ships, five triremes and an extra penteconter bearing the great man himself. 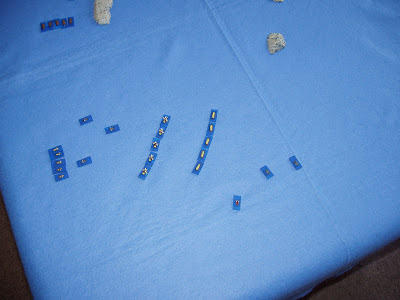 The situation proceeded to get complicated. The Greek penteconters are about to assault their Macedonian counterparts. Three taking on Alex’s light ships which have just deployed into line, while two are aiming for Alex’s own ship. The Greek triremes are just starting to appear at the top of the picture.

Disaster struck Alexander when his own ship was rammed and sunk. A dice roll was decided upon, whereby the lad took to a boat on a roll of one and drowned unheroically on a six. A one was rolled and a ships boat duly appeared alongside the wreck, protected by a trireme detached from the main force. 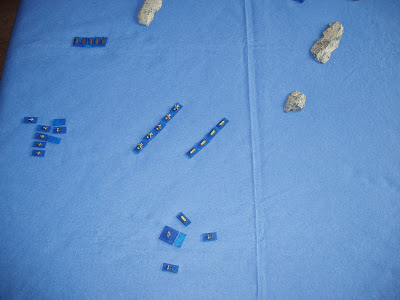 Meanwhile, to port, the Greek penteconters have attacked and largely been sunk themselves. Things proceeded to get more complicated as the detached trireme sunk the penteconter that had done for Alexander’s ship, while the damp one transferred to a merchant ship. 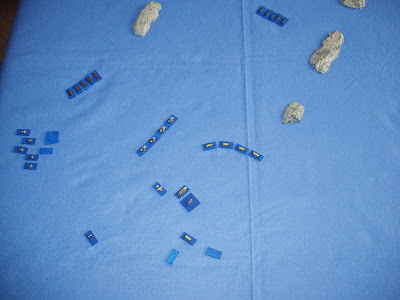 Alexander’s triremes have turned to starboard to protect the hero while the penteconters regroup. The Greek triremes are starting to loom a little disconcertingly as the Macedonian main lines are now outnumbered. 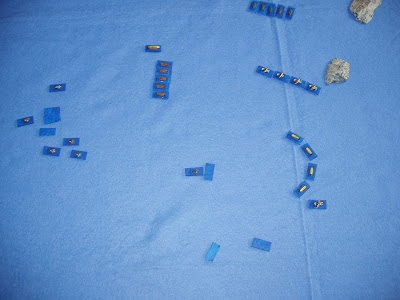 In the picture above, Alexander is now on the merchant ship sailing to starboard, while the merchant ships have turned away from the Greeks to cover him. The Macedonian triremes are maneuvering to a similar end and are going to have to try to fight superior numbers. Meanwhile, Alex’s penteconters have got moving again, and the remaining Greek penteconter has rammed and sunk the detached Macedonian trireme. I did say it got complicated. 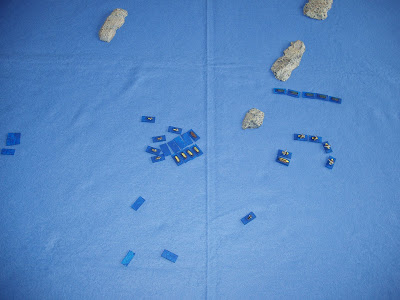 The final positions are above. The port-most Greek trireme squadron has turned to move through the rocks to block the merchant fleet. The other Greek triremes and Alex’s triremes have clashed in the center, but Alex’s penteconters have assaulted the Greeks from behind and most of them are sunk. Alex’s merchantmen are turning away from the triremes, encircling the man himself.

At this point the Greeks gave up, having lost nine out of fifteen ships to Alexander’s single loss. Alexander has finally won another battle.

The ships, incidentally, are Outpost Wargame Service’s 1:3600 ancient models, and very useful they are too. They do permit the wargamer to deploy lots of ships, which space usually precludes with larger scales. The rocks are from Leven. The rules are my own ‘Are You Sure They Should Be Black?’, available from the Rules link to the right. The quinquereme, incidentally, is the tempo marker and not a sneaky extra ship lurking on the table.

The hero stood on the prow of the ship, his cloak flapping wetly in the wind. The scene was only diminished in its heroism slightly by his red legs where the soggy cloth had whipped against his flesh. The men bent their backs to their oars as the ship sped for the shore.

Alexander pictured the scene future painters and sculptors would reproduce for millennia. The boy hero arriving in triumph to greet his mother waiting for him on the beach. He hoped she had a fire going.

Eventually, the keel of the boat scraped on the sand and juddered to a halt. After recovering his balance Alexander waved both arms are the group of figures on the shore.

One of the beach party waved back. No-one seemed to be about to help him, so Alexander jumped into the surf and paddled ashore.

‘Mummy’ he cried again. There was no point in wasting the heroic line, after all.

‘Hello Alex, dear. Good to see you. Glad you made it, this time. Good job you won the battle, I can’t keep recruiting soldiers and ships or you all the time. You need to be a winner, like daddy was.’