‘Sir, your illustrious predecessor would have done no less.’

‘True. But he did have to surrender to the English.’

‘But he fought like a tiger, my lord. It is your duty so to do. The Duke, who commanded your illustrious predecessor, set sail in joyful expectation of a miracle.’

‘And you expect me to take on the might of France with a few musketeers in hope of a similar miracle? There was one, but it was an English miracle!’

‘No sire, you are only to escort the siege train to Corbie, not defeat the whole French nation.’

‘Oh, very well. We will set out directly.’

Those of you who remember Don Pedro’s world-weary attitude to orders will recognize his grandson’s point of view. Still, orders are orders, and the Spanish must get their siege guns through to the French town of Corbie. This being a wargame, naturally the French are out to stop them arriving. 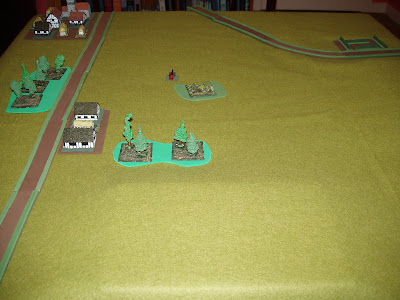 Originally, I planned this as a straight battle in fairly dense terrain between more or less evenly matched sides. The Spanish would deploy just to the right of the road and the French at the foot of the hill to the right. The more I thought about it the less I liked the idea, however, and a sort of encounter battle was the result. Both sides would enter in march order but are aware of the existence of the others. 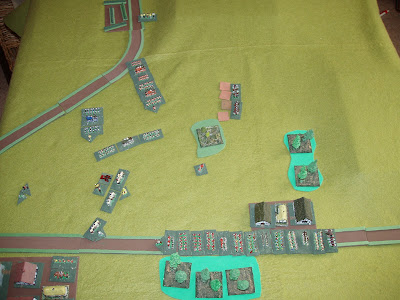 After a few moves a drone’s eye view is above. The French have marched their infantry into the centre of the table and are starting to deploy. The French cavalry is blocking the road and threatening the Spanish foot in march column on the road. The foremost Spanish cavalry, after some consideration by the general, charged the French light horse covering the deployment and routed it (you can see it fleeing at the top of the picture). Don Pedro kept control of his men and checked their pursuit, turning them away from the oncoming French. You can see them rallying centre-right.

Meanwhile, Don Pedro himself is rushing back to his infantry to start deploying them. His dragoons have made it into the larger village and their fire is slightly disrupting the French cavalry. This was actually a bit important, as it meant that the French general had to expend more tempo points to get his horse moving.

A lot depended on the next tempo roll, and Don Pedro won it, and got to his infantry in time to order the foremost tercio to deploy. The French cavalry very sensibly refused to charge the newly deployed foot, despite the prolonged urgings of their general. This allowed Don Pedro to deploy more of his infantry against the onrushing French hordes and for his cavalry to complete rallying.

The result for the French was disastrous. Their general was tied up with the cavalry, while the Spanish cavalry were presented with the open flank of the main French infantry march column. The charge went home with the result of three bases immediately routed, plus another swept away (I was merciful, the whole green regiment of French foot could technically have gone). French morale slumped to ‘fall back’, so they did. 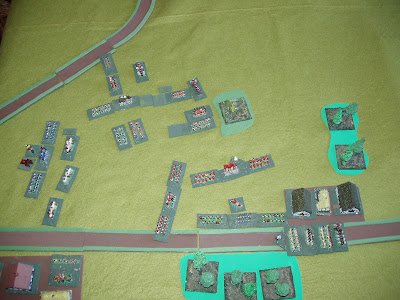 The Spanish had won, in fact, they had not lost a single base while the French had lost a light horse, five shot and two pike bases. Some parts of the French force were still able to fight, admittedly, particularly the horse, which had only been under fire from the dragoons and the lead Spanish foot regiment, and the blue foot to the left of the picture. Even if a poor morale roll had not routed them, however, the battle was lost, and Don Pedro could bring his siege train successfully to Corbie.

So, what went wrong for the French? Mainly, their general (me), got tied up with attempting to charge the Spanish foot on the road, for about three turns. The French infantry march columns were left to their own devices and the main one left its flank exposed to Don Pedro’s reforming cavalry. I was very dubious about their initial charge, incidentally, but it put them in a powerful position for later in the game. Those two bases of cuirassiers destroyed half the French army.

The figures above are mainly Irregular, while the Spanish cavalry are Baccus cuirassiers, which I used as they are easy to distinguish on the table. The buildings are Leven and the trees are Irregular as well. The rules were my own Wars of the Counter-Reformation which are available from the link to the right. The armies were sixteen bases a side, four pike, eight shot, three cavalry and a light horse or dragoon base (French and Spanish respectively).

‘That seemed to go quite smoothly, sire.’

‘Did it? Battles are never easy or smooth. Grandad won his first battles, remember. But he lost the campaign.’

‘The siege guns can now smash the walls of Corbie, sire.’

‘That is what I was ordered to achieve. But if we do that, the French will respond with more troops and a bigger war. And the English might land an army to help them, and their navy might get in the way of supplies of wine from Spain, and the whole war could burgeon out of hand and be a disaster for the people of Europe.’

‘The war has been going for seventeen years, sire.’

‘More if you count the fighting with the Dutch ‘rebels’, yes. We’ve not achieved much, really, have we?’