‘Isn’t it a bit late in the year to be trying that?’

‘It is, your highness, but I think the Dutch are getting a bit desperate.’

‘Why? I mean, we’re hardly in a position to move on Bergen until the spring.’

‘They probably do not know that, ma’am, and even if they do then our blockade on the place is going to make it a difficult winter for them. So we think they think that they have to give it a go. The question is, ma’am, whether you authorise us to stop them.’

‘Now, let me get this right. We have expended considerable money, ships, and not a few lives to capture Onetee and Teetwo, have we not?’

‘The purpose of capturing these ports was to blockade Bergen. Is that correct?’

‘To this end, we have positioned two fleets, one at each port. Yes?’

‘And now you are asking me for permission and authorisation to send those fleets blockading the port of Bergen to, let me see, what was it? Ah, yes, I have it. To release the fleets to go and blockage Bergen.’

‘When you put it like that, your highness, it does not seem that we particularly need your authorisation. But I thought it best to check.’

‘I do like to be kept informed, but go, and get on with it.’

You might recall some amphibious operations in the Low Countries over the last year or two on the blog. These come under the campaign title ‘Small Boat Sailing’ and you can catch up on the campaign from the link of the same name to the right. Of course, given that this is a naval action, most of you will stop reading at the end of the sentence.

For those of you who have carried on, the plan is this. The Dutch are trying to relieve Bergen by sea, and are therefore escorting a convoy of twelve merchant ships to the port. To do this they have to pass by Onetee and Teetwo, the two smaller ports on the estuary, which were taken by the Spanish earlier in the year. The Dutch have twelve medium-sized warships to do the escorting. The Spanish have their light fleets from their ports, twelve small-sized warships each.

After some thought, and realising that I was unlikely to be able to recreate the battlefield from the first wargame in the campaign, I reasoned that the best place to intercept the convoy was on the open sea. There would be more room to maneuver, for one thing, and the terrain would be much easier to set up. The initial dispositions were, well, no one was on the table, so it would be a bit of a boring photograph.

A couple of dice rolls established that the Spanish fleets would appear on the table at moves three and six, giving the Dutch convoy a bit of a start in crossing the table. Here it is in all its glory. 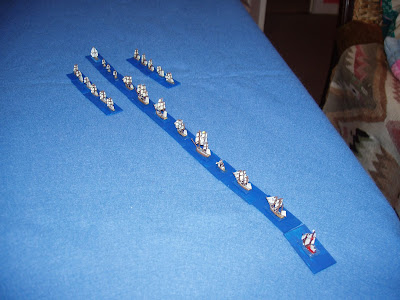 The ships to port and starboard of the main line are the escorts, and the convoy is topped and tailed by larger warships. The ships are, as I recall, a mix of Hallmark and Tumbling Dice, with value removed by my own painting.

After a few moves, the Spanish arrived, and jockeying for position started, not helped by a variable wind direction and slowly worsening weather. 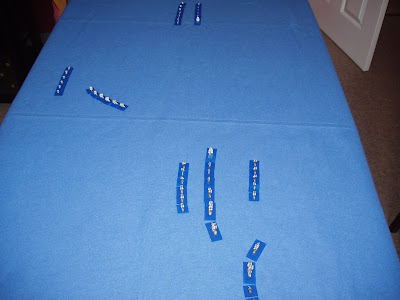 The general aims of the admirals can be seen, bearing in mind that the Dutch objective was to exit via the far left corner of the table. The rear half of the convoy has just split off to aim to pass the Teetwo Spanish ships to the starboard and get across the table being them, shielded by the starboard escorts. The rest of the convoy is aiming straight for the exit (-ish; they have adjusted to starboard a bit to get their escorts aiming towards the Spanish interceptors from Onetee.

The Spanish Teetwo fleet, at the far end of the table, is aiming straight for the convoy, while the Onetee fleet, to the left of the photograph, has split in tow. One half, consisting of the cutters (as it happens, these are in fact Napoleonic era ships, but I wasn’t arguing when I bought them, and I’m not arguing now) is aiming to get in front of the convoy and give it a few broadsides, while the rest is aiming to get behind the port escorts and into the rear of the convoy.

This all took a bit of thinking about. One of the interesting things about purely naval wargaming is that there is quite a lot of positioning to do and, with a variable wind (perhaps a little too variable, but I’m neither sailor nor meteorologist) and ship speeds as a consequence, it is all a bit complex.

Anyway, did I mention that the weather was deteriorating? At turn eleven it hit storm, having already been to light rain (reduced visibility) and then heavy rain (even less visibility – the fleets, although closing actually lost visual contact). I had to invent some storm rules, deciding that each ship would vary from its course by the difference of the throw of two average dice in base widths. 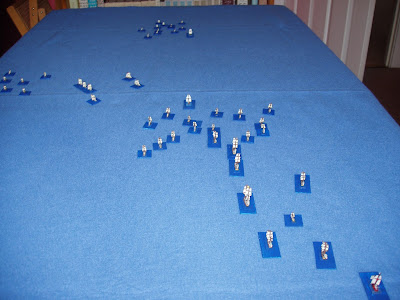 Chaos, naturally enough ensued, as seen above. None of the fleets have managed to maintain any semblance of formation and have only just maintained their courses. A lot depended on the wind and weather rolls on turn twelve, If the weather improved, the action could be sustained. If not, then it would be every ship for itself to scramble into a safe port or stand out to sea to weather the storm.

The roll was made. The storm remained and the wind also stayed the same. The scattering of the ships continued and the game was wrapped up.

In a normal wargame, of course, this would be a disappointment. In a solo game as part of a narrative campaign, that is not the case. The convoy has failed to get to Bergen.

‘Bergen should fall to us next year?’

‘If we maintain the blockade by land and sea, your highness, it should fall into our hands like a ripe plum.’

‘Plums only ripen in late summer.’

‘Yes, your highness. I am trying to think of an early-ripening fruit but am failing at present.’

‘Your strategy is correct, admiral, but your metaphors are lousy.’