I have been frantically painting. Well, not frantically; after all, wargaming and even painting toy soldiers is a hobby, not a necessity. But I have been painting. This has been for two reasons. First, I have ordered some more toys, and so need to have the equivalent number painted before Christmas to prevent the unpainted lead pile from growing any higher. This means that 288 little fellows need daubing. So far I have managed 216, so not too far to go.

Secondly, I have been trying to finish the English Civil war Irish and Scots. This is for two reasons. Firstly, they have been hanging around for nearly two years. While that is trivial compared to the length of time of of the toys have been waiting, they have been in a kind of half-painted limbo land. The second reason is a bit better grounded. It is usually easier to focus on painting something when you have a specific project in mind. In this case, in mind was the battle of Benburb in 1646.

I won’t bore you with the detailed background to the conflict in Ireland in the 1640s. As Blair Worden noted in his short guide to the English Civil War, the definitive account of the war(s) in Ireland starting in 1641 remains to be written. Even to professional historians it is, to say the least, confusing.

Suffice it to say that to get to Benburb the Anglo-Irish Scottish army (I will call it ‘Scots’ below, just for ease of reference) commanded by Robert Munro marched a long way to meet up with some reinforcements, failed, and was met by an Irish army led by Owen Roe O’Neill. The Scots seem to have slightly outnumbered the Irish. It seems that Munroe expected the Irish to avoid battle, but O’Neill, having been supplied by the Papal Nuncio, decided to fight.

The Scots were tired, having marched about 15 miles on the day, but they attacked anyway. Accounts, inevitably, vary. I followed Gerard Hays-McCoy in the dispositions of the forces, and the return of some of the Irish cavalry from dispersing one of the Scottish columns. The rules were my own Wars of the Counter Reformation. The Scots were given one level of terrain shaken to start off with, reflecting their tiredness. 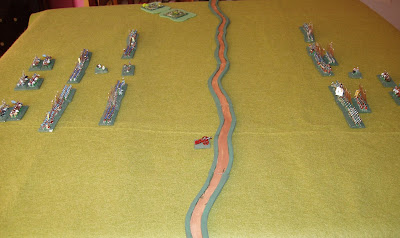 The initial dispositions are above, Scots to the left and Irish to the right. The river Blackwater is nearest the camera, and the Irish cavalry (or the rest of it) will arrive from the far side of the battlefield upon the Irish rolling a six on their tempo dice. The figures are mostly Baccus, with the exception of a couple of bases or Irish lancers.

To be honest, the Irish horse which you can see are also Baccus figures. But Baccus does not produce Irish horse, so I repurposed some Scots to them. I do have some surplus Scottish lancers as well, and I could have painted them as Irish (the only difference is the colour of the caps – blue for Scots, green for the Irish. Unhistorical, agreed, but I need some quick recognition on the table top). After all, I wanted to have a battle. 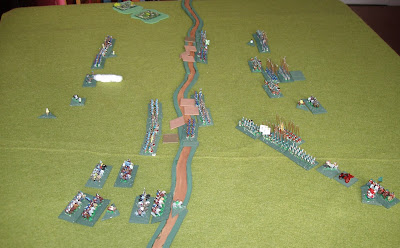 Anyway, historically, the Scots cavalry attacked the Irish left first, and so that is what happened. The picture shows how badly it was going. O’Neill turned one of his infantry units to face them (they are up a slope as well, by the way} and moved the cavalry around to assist. Good Irish shooting has seen the rout of the first wave of Scots, who can be seen running away between their mounted colleagues and the foot. The infantry, meanwhile, are starting to cross the stream.

It did not get much better for the Scots. Their second cavalry wave crossed the stream and were charged and routed by the Irish horse. The -1 from the fatigue and the -2 from not having reformed having crossed the stream crippled them, of course. 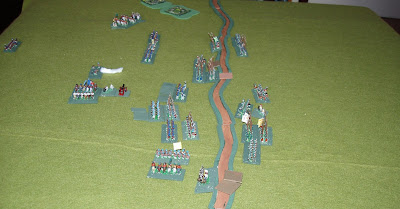 The final dispositions can be seen above. The Irish cavalry have arrived, crossed the stream and are now menacing the Scottish rear. Munroe has moved his remaining cavalry towards the centre to counter the threat, but that means the Irish left wing horse have now crossed the stream and charged, and routed, some musketeers. In the centre the Irish are crossing the stream under only intermittent fire from the Scottish artillery, while on the far side the Irish infantry has routed two more musketeer bases (good shooting, again, although the Scottish -1 did not help their cause).

At this point the Scottish morale dropped and the army routed. It was probably just as well, as the Irish left wing horse were about to run further amok, and the Scots were running out of options.

It is always nice when a set of rules, especially experimental ones written by me, produce a historical result. I did wonder whether the -1 for the Scots was too swingeing, and I still do. Perhaps it should have been on close combat dice only, not all shooting as well, but then firing a musket was a pretty physical affair. I might try the battle again without the Scots at penalty and see what happens. It was not a particularly easy victory for the Irish – some of the dice rolling they had was appalling – but it was a victory for all that.

Historically the outcome was as in the wargame. The Scots were more or less knocked out of the war, at least in any active sense, and the Irish went on to fall out among themselves until the English Parliament got itself organised and reconquered the land.

It is interesting that some accounts blame the Scottish loss on lazy soldiers shortening their pikes for easy carrying. Perhaps they did, but then so, perhaps, did the Irish. The idea has percolated down the ages to modern wargame rules, however, which downgrade the Scottish pike. It seems much more likely that the Scots lost because they were fatigued, rather than their pointy sticks being a bit shorter than the opposition. But we all love a technological explanation, even if it is wrong.