You Are Now Entering Marlborough Country

I am, of course, showing my age, my childhood hearkening back to the days when cigarette advertising was permitted, and, indeed, propped up several sports. However, I have, as you might have noticed, finished the Anglo-Duch and the Bavarian War of Spanish Succession armies, and so the pondering has been what to do with them.

Now, obviously, the answer is ‘have a wargame’, but the question is then ‘yes, but which.’ I am not a particular expert on the WSS, although I have read a little about it (it was a long time ago – my reading, not the war which was even longer ago). In desperation, I hit Google and came up with a bit of a gem, two battles (on the Helion website) reduced to wargame-ness by Andy Callan. I know its advertising, but it is also free and you do not have to buy the books.

The first battle is storming the Schellenberg in 1704. Well, maybe sometime. The second caught my interest a bit more, the Battle of Elixheim, July 1705. Looking at the orders of battle, I realised that with a little jiggery-pokery I could make up the forces. I then resorted to my few textbooks to try to flesh out the detail of what happened, behind the wargame reduction.

The short answer is that I did not find much, the 1705 campaign being rather relegated to obscurity between the 1704 Blenheim and the 1706 Ramillies campaigns. Still this book:

Came up with the goods. The situation Marlborough was tackling was the French (etc) army on the defensive, behind the ‘Lines of Brabant’. This was a network of forts, waterways, flooding, barricades, and entrenchments. The lines were undermanned; indeed the idea was that they would delay anyone crossing them, rather than stop them. Marlborough feinted south, convincing the Elector of Bavaria and General Villeroi to concentrate in the south, but Marlborough marched north overnight and crossed the lines.

According to Chandler, the hastily gathered defenders consisted of 33 understrength Spanish (presumably Walloon) and Bavarian squadrons, 11 battalions of Bavarian foot and ten triple barrelled guns. Marlborough (for it was the man himself) had 16 squadrons of British cavalry, plus the Hessians and Hanoverians of the advance guard and some infantry, with more approaching.

A brisk attack by Marlborough's men routed the opposing cavalry, but some hesitation on Marlborough’s part (uncharacteristic – Chandler cannot explain the blip on his hero’s record) let the Bavarian foot form a rearguard as the rest of the French army scuttled across the River Gheete to safety near Louvain.

A brisk little action, then, with not a huge amount of meaning. But something possible with the forces at my disposal. Callan has a handy map which, if you chop the lines off the right-hand side and heed to the advice that it was good cavalry country is easily represented on the table. Callan has the Anglo-Dutch with 8 regiments of horse and 4 of foot, while the French have 5 regiments of horse, 5 of foot, 2 dragoons and two guns. 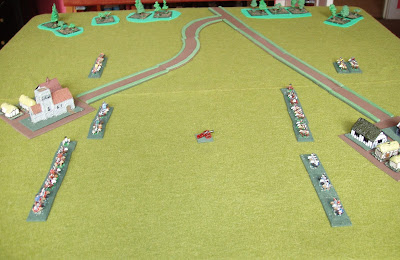 I confess it all went a bit pear-shaped for the great man. The deployment, it turned out, was not of the best. There is a reason for having multiple lines of cavalry, even in my rules. Marlborough was held by inferior numbers of Bavarians in the centre, while the Bavarians got the drop on the Hessian cavalry on their right. After a couple of rounds of combat, the Hessians fled. On Marlborough’s right, the rest of the British cavalry could not come to grips with the Franco-Bavarian dragoons. Then, as the infantry arrived, Marlborough was forced to deploy the Hessians to deter the pursuing Bavarian cavalry (which they did very nicely) but then lost one base in the central cavalry swirl while routing one. The Bavarian infantry was starting to arrive by then.

Final positions are as above, just as Marlborough’s side went to ‘fall back’ morale. The Hessian horse have disappeared stage right, while their foot are preventing most of the Bavarian horse from rallying from pursuit (you cannot rally while under fire). The British foot are proceeding down the table. In the centre Marlborough is rallying his cavalry while a Bavarian cavalry base pursues some English across the table. To the left, the Bavarian foot have arrived.

I pondered what to do here. Marlborough has not technically lost, although 4 being cavalry bases down means his morale is fragile. Strategically he does not have to win the battle, because the Dutch army has crossed the lines behind him and is now camping a bit further north. While they have marched 27 miles overnight, they will still seriously outnumber the Bavarians, who can still form the rearguard from Villeroi’s retreat.

Cavalry actions under these rules are fast and furious. I had to make up a few rules, specifically about when pursuers come under fire and lost the ranged combat. A pursuing base got a ‘recoil’ result from the Hessian foot, and so I had to ponder what that would mean. I decided that the pursuit would stop but that the cavalry base would not start rallying because it was in combat. The result was that the Bavarian horse were pinned in disarray in front of the Hessian foot for a few turns, the latter taking potshots at them.

I also discovered that I need some more marker types, for pursuing bases that have not started rallying yet, but that is part of developing and understanding rules. I also need to learn that deploying cavalry in two or more lines might be an idea.