There I was, starting to think about some English Civil War battles (by modern conventions, this sentence should have started with a ‘so’, but I disdain such redundancy). And behold, I picked up Julian Lander’s ECW battles volume one, for DBR (as used before) and flipped through it, but could I find something that caught the imagination? Could I heck, as they say.

After some thought and two cups of coffee, I resorted to the Internet. After all, Elixheim had been an internet discovery. Incidentally, I did a second go at Elixheim and, with the cavalry charging at a trot rather than a gallop, the Duke managed to win this time. I did take some photographs but they do not make much sense. However, I found little which tickled my fancy and was about to resort to two regiments of foot, two of cavalry, and two guns and see what happens as a scenario, when I dropped across operations around Jersey.

Guernsey, apparently, was mainly for Parliament, while Jersey was royalist in sympathy, under the Carteret family. As part of the mopping-up operations after the battle of Worcester, Robert Blake was dispatched to capture Jersey, more or less the last outpost of the royalists on British territory, in October 1651. There is a decent write-up of the history of the operations here. It is amazing what you can find on the web.

Anyway, after a few autumn storms and a bit of sailing up and down, Admiral Blake and Colonel Heane landed, after a naval bombardment, at St Ouen’s Bay and the west coast of Jersey. They had about two thousand men, from Hearne’s regiment and from that of Sir Hardress Waller’s, two companies of Guernsey militia, and two troops of horse, on eighty ships (including transports, only 6 men of war are known). They were opposed by Sir George Carteret and the Jersey militia, plus a couple of units of Carteret’s own men, who presumably formed the garrison.

At sea, you can see the edge of Blake’s force, six fourth, fifth, and sixth rates. The Parliamentarians actually spent most of the night in boats, it seems, which cannot have been too comfortable in October, even in the Channel Islands. 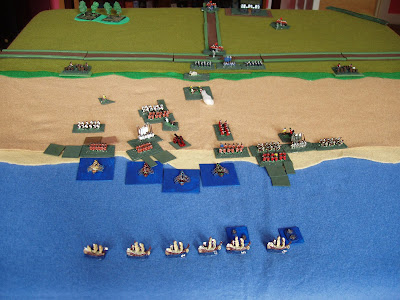 The landings did not go according to plan. The picture above shows about six moves into the action. The Parliamentarians are pinned on the beach, subject to fierce counterattacks by the militiamen. After initial success in the landing on the right, the troops there are being forced back by the men under Carteret’s personal command. The left was delayed by deep water and was kept from organising by the shot of the white-coated militia. A desperate attack up the beach led by Colonel Hearne has had only limited success.

To the rear of the royalists, you can see the cavalry are starting to arrive. If there are any Parliamentary foot left by the time they get there (they were delayed in setting out due to low tempo point rolling by Carteret) they will almost certainly see them off before the second wave of the landing parties arrives. In fact, only two sets of ship's boats have made it back to the men of war, and so any reinforcement for the beach head is going to be some time in coming.

It did not last much longer. The Parliamentary musketeers on their left took more damage and routed, as did their colleagues next to them under attack from the militia pike. On the Parliamentary right, the attempt to outflank and destroy the militia musketeers foundered on bad dice rolling and that company of musketeers fled as well. Half of the landing force was now destroyed and it was only a few moves before the cavalry and the reinforcements from St Brelade would start to arrive. Hearne, his troops at ‘fall back’ morale, had little choice but to attempt to re-embark his battered forces and hope for better luck next time.

In reality, Carteret’s militia seems to have mostly fled overnight, while the Parliamentary soldiers were in their boats waiting for high tide. Of what was left when the landing started, the militia fired three or four volleys before taking to their heels. The royalist cavalry did oppose the landing, but did not manage much. Over the next week, Blake and Hearne secured most of the Island and seized St Helier. Part of the force remained there blockading Elizabeth Castle while the rest moved to Mount Orgueil Castle, which surrendered the next day.

Attention then focussed on Elizabeth Castle. This was left to Hearne to blockade (it was nearly impregnable) while Blake moved to Guernsey’s Cornet Castle. Hearne brought up mortars which had an impact and, eventually, after hearing that Charles II was in France (after Worcester) Carteret received permission to obtain the best terms he could of surrender. This occurred on 15th December. Castle Cornet surrendered at the same time.

My landing and the real-life account of the landing do not, of course, square up. In a sense this was deliberate on my part: a wargame where half the opposition deserts before a shot is fired, and most of the rest fire a volley or two before fleeing is hardly a wargame. On the other hand, I have had some easy victories for the landing forces (the Spanish at Whitby) and some hard-fought victories for the landing forces (Caesar against the British). To some extent, the dice rolls were not kind to Hearne and his men.

The militia was also demoralised and tired from marching up and down the coast road to defend against the various feints that Blake made towards landing. This too was not represented in the game, and nor were the ideas that the royalists were defeated and there was not much point in carrying on, or that the taxation imposed by Carteret was hugely resented.

Still, it was fun and might be repeated, or Blake might have another go. The troops, incidentally are Irregular, the small rowing boats are Tumbling Dice, and the ships 1:2000th scale Conflict Miniatures Anglo-Dutch Wars. This is an odd scale and they do not really fit with my 1:2400 scale rest of the naval forces. They are also badly painted (by me). I am not sure whether to set to and repaint and base them or to go for Tumbling Dice replacements. Ships are fiddly things….