As I have mentioned before, I’m sure, Marathon is probably my favourite battle, at least to get onto the wargame table. Partly, I think, because it is basically a simple action. The Greeks attack, the Persians try to shoot them off and fail. There are some extras, of course. The role of the Persian horse, for example (assuming that they were present), and the Greek formation with a weaker centre and stronger (deeper) flanks.

A second reason for liking Marathon is that it was the subject of the first ‘proper’ wargame articles I read, a long time ago in Military Modelling in the 1970s, by Charles Grant. I suspect I still have the articles in my archives somewhere, and a jolly good read they were too. Of course, it took me decades to get around to painting appropriate Greek and Persian armies, but now I have managed that, nothing is going to stop me.

I confess that the Persians are a bit of a minimalist operation at the moment. I had just enough for the nineteen bases of foot which seem to be required for the battle according to my calculations, plus three of hoplites (Ionian Greeks, probably fairly reluctant recruits) and two bases of cavalry (one heavy and one light). I have a great number of Greek hoplites, of course, from having to paint both sides for the many Greek against Greek actions there were. But Marathon keeps returning.

That is all the more so because I have just finished another nine bases of Persian archers. The first battle of the Marathon was slightly marred visually because I had to use a few bases of Immortals to make up the Persian numbers. So another outing for the battle was on the cards.

I had managed to preserve the army lists for the two sides in the Ancients rules, which was remarkably well organised of my (and quite out of character). However, the sketch for the terrain had vanished, if, indeed, it ever existed. I was forced back to my sources – Herodotus, Phil Sabin’s Lost Battles and Peter Krentz’s The Battle of Marathon. Of course, the terrain is fairly simple – a plain with the sea on one side and steep hills on the other. Controversies abound, however, about the line of the coast, whether there was a marsh or a lake behind the Persian lines and the location of the Persian horse. 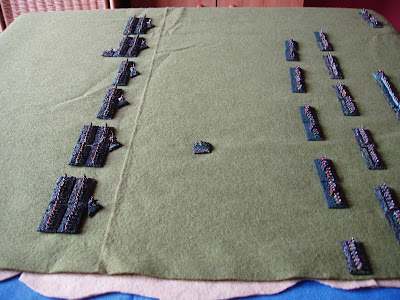 The picture shows the setup. The Greeks are to the left, already moving, while the Persians have deployed in three lines. The idea was for the first line to shoot and disrupt the Greeks, while the second and third lines (the third line were the Ionians Greeks) mopped up any breakthroughs. The Persian cavalry has just arrived in the top right-hand corner. Their brief is to delay the Greek left.

The Persian set-up shows, in fact, that I cannot remember my own rules. The Persian foot (who are a specific category of their own) get a +1 for being rear supported by other Persian foot. I confess to not being a believer in the ‘Sparabara’ formation. Perhaps it would work against light horse, but it does not really seem a viable or practical formation against heavy foot. I might be wrong. By the same token, I do not believe in the classic early modern tercio formation of Spanish foot. It just does not seem to be a formation that would be adopted on a battlefield by practical people like colonels and generals. But I could be wrong.

So what, you might ask, happened? Well, the battle was fairly predictable given my unexpected weakening of the Persian front line. 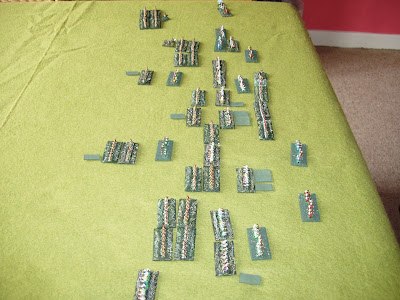 You can see that the one thing that went to plan was the Persian cavalry activities: they have delayed the far left of the Greek army. However, the heavy cavalry have routed off the table, while the lights are still throwing javelins, ineffectively, at the hoplites. In the centre, more or less, carnage reigns for the Persians, at least. Where they managed to get a lucky shot at the Greeks, they have disrupted the assault. However, due to some poor dice rolling, this only happened in two places. Everywhere the Greeks got into contact, they won the subsequent melee. The result is that while you can see a fair number of Persian foot on the table, seven of the bases are routing, and some of the others are in trouble having recoiled shaken against still advancing foes.

When I realised my mistake with the Persian deployment I reset the battlefield for another go, but domestic duties and a spot of ill-health (nothing serious, but a nuisance) led me to pack it away. They will be back; part of the idea was to establish a ‘baseline’ Marathon to see what the effects of adding extra Persian foot to their army would be. Sabin suggests that the number of Persian horse and the orientation to the coast are less important factors in the outcomes than Persian infantry numbers. Now I have some extras I intend to give it a go. But I need to establish a proper basis first.

The problem for the Persians is that the archery fire is not terribly effective against the Greeks, and the Greeks advancing into contact can be terrifically destructive against them. There is only a factor or one between the two, but advancing into contact gives one extra, and being two deep gives another. If the Greeks get into range and then win the initiative, the Persians only get one opportunity to shoot anyway, which seems to model the Greek ‘charge into contact’ Herodotus reports quite nicely.

Anyway, Marathon is a nice and easy quick battle to set up and play, so I will have another go sometime soon.