‘What are you doing, man? Cooking lunch?’

‘No, your majesty. It is a lombarda trabuqera.’

‘Bless you, man. Now, what is this implement you are messing about with?’

‘No, really, your majesty, it is a lombarda trabuqera.’

‘It looks more like a cooking pot. How do you aim it at the walls?’

‘Well, your majesty, it shoots over the walls. Like a trebuchet, for shooting the severed heads of your enemies back into the town.’

‘You shoot heads from it?’

‘No, your majesty, stone balls, mostly. But over the walls, not into them.’

‘Her majesty supplied it.’

‘Her majesty also supplied these pictures of instruction, your majesty. We put this stuff into this bit, and the ball on top, and we light that bit and run away.’

‘How does it shoot if you run away? Do I need to put you on a charge for cowardice?’

‘No, your majesty. Running away is recommended. The piece shoots when the fuse has burnt away and that stuff lights and the ball goes off in a blur.’

‘Excuse me sire, but the scouts are reporting dust clouds from the east.’

‘What did you see, soldier?’

‘Moors sire. Thousands of them.’

‘Get a message to Al-Arousa to command the army to deploy.’

‘Make sure it gets there.’

‘How will that help?’

‘I’ll get through, sire, to Al-Arousire.’

‘That is terrible, sergeant.’

Recently, I have been wondering if my rules favour the offence. Ferdinand has been on the offensive for the previous battles in the Reconquista campaign, and so I was a bit interested as to whether the Castilians would stand being the defenders. So Ferdinand was sent, with some new technology, to besiege a hsin, an outlying castle. In the real Reconquista campaign, it appears that it was while besieging outlying fortifications that the Castilians learnt how to use cannon to win sieges.

“Became the mortero or pedrero; barrel lengths varied from one to three times the diameter; usually cone-shaped, wide mouth, shot stone. Akin to the modern mortar.”

Not being a Spanish or Latin reader, I feel that lombarda trabuqera might translate as something like ‘Lombard Trebuchet’, which would probably be fair enough, although lombarda, is also described as bombarda in Spanish (bombard in English), so it might well be trebuchet bombard, or I could be totally wrong.

Anyway, a few moves after the sergeant's terrible pun, the Castilians were turning out of their quarters and hastening to the ridge to repel a Grenadine army which was deploying to relieve the hsin castle. 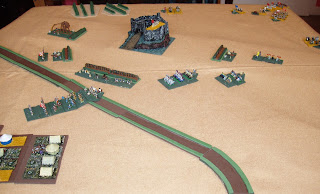 Dice had been rolled to control the timing of Sergeant Punster in raising the Castilian army, the movement of said army, and the arrival of the relieving force. Ferdinand is consolidating his reputation as lucky, as the Castilians were moving only a turn after the first elements of the Grenadines arrived.

In the picture you can see the siege lines, Ferdinand’s command post on the ridge, the Castilian jinites and gendarmes hastening forward, followed by the infantry. In the far corner, the Grenadines are arriving, sending their jinites to right and left to attempt to outflank Ferdinand and get among the siege equipment.

It did not work out very well for the Grenadines. Their main force of crossbow infantry was charged while in march column by some gendarmes and routed. Ferdinand’s jinites stalled the move around his right flank, and spearmen in the siege lines stalled the left outflanking movement. As the Grenadines wavered under the impact of the heavy cavalry and the Castilian infantry started to deploy on the ridge, I, as Grenadine commander, gave up, as I no longer had the infantry resources to relieve the castle. 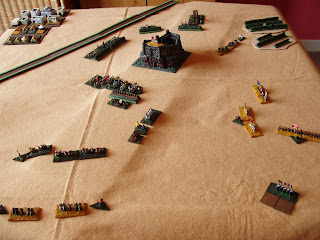 It seems, probably, that I am not biased (or the rules are not) towards the attacker in my games. But I might be biased towards Ferdinand and the Castilians. On the other hand, as I have noted before, the Grenadines do not have an answer to the Castilian gendarmes. More or less whatever the gendarmes hit they destroy. In this case the Grenadine tempo dice gave out when they needed to deploy their crossbowmen, and so they were charged and routed, while in column, downhill with Ferdinand attached and never really stood a chance.

‘What is your name, soldier?’

‘Where are you from, Hans?’

‘Is this another infernal device for terrorising the enemy?’

‘No, your majesty, that is dinner.’

‘Who is your colleague?’

‘This is Knitz, your majesty?’

‘Place these men under arrest for crimes against humour.’