‘Your highness, I believe the rebels are attacking our men at Teetwo.’

‘You do not surprise me. They will want to seize the port back.’

‘Yes, ma’am. But they have the advantage of being able to use cavalry. We have not managed to land the horses yet.’

‘I dare say the stout hearts of our men will overcome the lack of mounts.’

‘Yes, ma’am. The Dutch do seem to be deploying some of their new heavy horse, however, cuirassiers.’’

‘In three-quarter armour? Oh, well, we could do with the metal to make pots to boil the horse-meat in, I suppose.’

After the Small Boat Sailing incident, the diligent reader will recall, the Spanish had landed at Target Two, the village on the Dutch side of the estuary, while the Dutch fleet was at Target One, with the Spanish lying offshore, waiting to pounce.

Naturally, being a wargamer, I did not proceed in logical order, and so the action at Target Two (Teetwo) was the first onto the table. The Spanish have had a short amount of time to dig in at the village port, while the Dutch have gathered up their forces and advanced.

The picture shows the situation a few moves into the action. Teetwo is, obviously, at top right, and the Dutch are advancing to oppose them. On the walls, a Spanish naval gun has opened up. I am assuming that, by the 1630s, the Spanish had learnt to use the truckle carriage for naval cannon, by the way, at least in northern waters.

The Dutch are all Irregular miniatures figures, except the cuirassiers, at the back, which are Baccus, and newly painted by yours truly. They are a reasonably conventional force of 2 pikes, four shot, a light horse (mounted arquebusiers) a cannon, two bases of reiters and two of cuirassiers. Not that there is much difference between the two latter, in fact (or, in rules).

The Spanish are a bit less conventional, consisting of two pikes, four shot, a cannon, three bases of sailors and two of sword and buckler men, representing their non-mounted cavalry. Again, the figures (although you cannot really see them) are mostly Irregular. The exceptions are the naval gun, which is Langton, and the naval landing parties (when they appear) which are also Langton. So far as I recall there are no other landing parties or naval guns available in 6 mm, which is surely an oversight by someone. Langton figures are fine but I suspect they are true 1:300th scale, so they appear a bit small and spindly alongside Baccus and Irregular, like Heroics and Ros figures. They are also for about 170 years later, but I can live with that.

The buildings are a mix of old Baccus and Leven, and the earthworks are my trusty Irregular Roman marching fort. The sharp-eyed among you will have noticed three ships a-sailing in the background. These are two Hallmark brigs (I think) and a Tumbling Dice Hoeker, operating out of the port with a surprise for the Dutch.

As the Dutch deployed, the plans started to be shown. The Dutch idea was to seal off the port with their cavalry and then assault the corner with the cannon with the infantry, shot in by the cannon. The Spanish plan was to sit tight until the landing parties hit the beach to the left flank and rear of the Dutch. 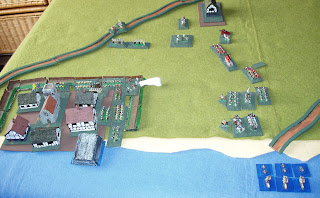 The picture shows the deployment in accordance with the plans. The Dutch curiassiers are nearest the beach providing flank guards to the advancing infantry. The Dutch cannon has just deployed. Meanwhile the Spanish flanking force has just leapt into their dingies to hit the beach (the dingies are very useful little boats from Tumbling Dice – I’ve been looking for something of this nature for years).

Spanish naval gunfire has clearly improved since the Armada. The gun on the walls hardly missed all battle, disrupting the Dutch infantry and, perhaps more importantly, engaging in some wickedly effective counter-battery fire, and eliminating the Dutch cannon in a single shot. Meanwhile, the landing parties hit the beach. Count Maurtiz, the Dutch commander, dashed to the left flank and turned the rearmost cuirassiers around to crush the sailors. The leftmost landing party, not really seeing any other alternative (their friends were safer from being charged by being behind the line of the stream) charge the curiassiers. (I really did not see any alternative here; if they had attempted to stand the charge of the horse, they would have been toast).

To my surprise, the cuirassiers fled. Not only did they flee (without spending any time in close combat) but, due to the constraints of their deployment, they fled through the other cuirassiers and swept them away as well. 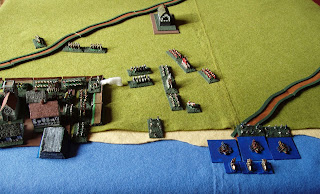 In the picture the cuirassiers can be seen fleeing between the lines, while the sailors continue their pursuit towards the friendly walls of Teetwo.

The cavalry threat having evaporated, the Spanish sallied forth and, lead by their general, set about the Dutch left flank musketeers, who were turned to face the threat from the remaining landing parties. With alarming alacrity the swordsmen routed the musketeers, including Count Mauritz, and the Dutch, who had been wavering, collapsed in rout. 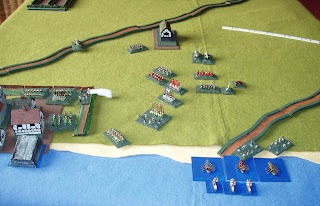 What can I say? It was an enjoyable and amusing battle – the look on my face when the landing party charged the cavalry and rolled a six-one against them must have been something to behold, and the accuracy of the Spanish gun also caused some note. The Spanish had a plan and it worked, almost to perfection. Actually, much better then I expected, I was a bit slow with the counter-attack. The Dutch sort of had a plan, and it really did not word, largely due to very poor dice rolling at crucial moments.

‘Count Maurtiz of Nassau, your highness.’

‘Ah, Mo. I was expecting you. Your wound is not too serious, I hope.’

‘Well, it is lovely to see you. You’ll know Freddie, of course.’

‘Well, now, I’m afraid Mo that you are not as popular as our Freddie. No one has asked to ransom you, so I am thinking about a week or two of special offers. You know the sort of thing, ransom one Freddie and get a Mo free. What do you think?’