‘What is under your jacket, sire?’

‘Of course not man! I am the king! I order you not to look.’

‘I am sorry, sire, but the Queen issued strict instructions to inspect your person and baggage before allowing you on board.’

‘I am afraid, sire, that according to our instructions, you are not permitted not to come on board. Now, sire, this bottle of ‘olive oil’?’

Poor Ferdinand is starting to sound like a hen-pecked husband, but he does have a job to do and Isabella is determined to make him do it. As you might recall from last week, his mission is to intercept an ambassador from the Barbary States to prevent him from negotiating an alliance with the Grenadines.

Having just revived my Renaissance galley fleet it was nice to get them onto the table with a purpose in mind. The Spanish had a flagship (Ferdinand) and eleven heavy (ordinary) galleys, while the Barbary Coast fleet consisted of eight galliots, three medium galleys and a Lanterna for their flagship. There was also a merchant galley with the all-important ambassador aboard.

The pictures of the starting fleets did not come out too well and were a bit boring. The ambassador had to travel diagonally across the table (down the long bit) from ‘out to sea’ to the safety of Malaga harbour. The Barbary Coast fleet was to escort him there. 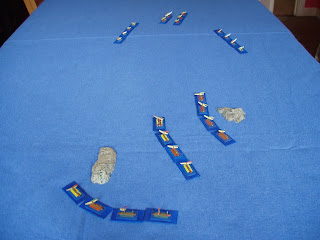 The picture shows the game a few moves in. Malaga harbour is in the near left-hand corner of the picture. The Spanish are in three squadrons; the left-hand squadron is going to block the route to Malaga, while the central and right (the centre one led by a very sober King Ferdinand) will assault the escorts to try to capture the ambassador. The man himself is in the centre-left column of the Barbary Coast fleet, the second ship back being the merchant vessel (it has three masts, incidentally). Recognising that the Barbary galliots are a bit light for a face to face fight, my plan was to outflank the Spanish to left and right and try to hit their rear when engaged with the heavier ships.

The ships are all Hallmark 1:2400 galleys, bought years ago when they were still in Leeds. The rocks are from Leven Miniatures. 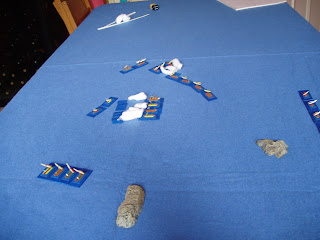 A few moves down the line and it is going a little pear-shaped for the Barbary Coast. The Spanish blocking squadron is in place (to the left) while their own left-wing is a long way from the action. The right-wing galliots have attempted to block Ferdinand’s central squadron, which deployed into line and sank two of their protagonists. In the background, the Barbary Coast galley squadron has been forced to deploy to stop the Spanish right and is now trading shots with them. In the background, the Barbary Coast flagship and the merchantman are taking evasive action. 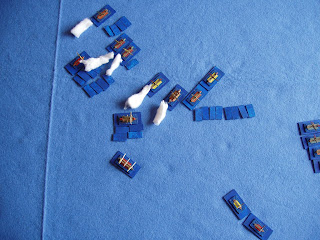 It did not get a huge amount better for the Barbary Coast fleet. The Spanish right pulverised their galley squadron (albeit losing one galley themselves). Ferdinand’s squadron attacked the lanterna flagship, causing a great deal of damage while the rest of his command was just managing to slip past the wrecks in pursuit of the ambassador himself. 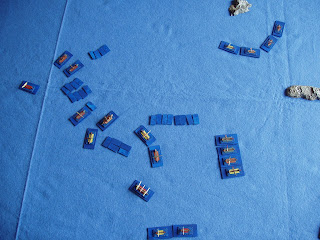 A turn or two later and it is all over. The Lanterna has been sunk and the Barbary Coast fleet is starting to flee. The rear of Ferdinand’s squadron is now in artillery range of the merchantman which will surrender. It will then be escorted to Cadiz and the ambassador entertained by Ferdinand and Isabella.

The rules I used were ‘scratch’ ones, giving each sort of galley (galliot, medium galley, heavy galley and flagship or Lanterna) a number of hits they could take (from two to five) and a strike and defence value. Galliots can move faster but are worse at defence and shooting. Galleys can, of course, only shoot forwards. Boarding, if it had been necessary, would have been on the same basis. I might get around to writing them down sometime.

As it happened, boarding was not necessary. The Spanish had a large number of fluke good dice rolls to cause major damage to the Barbary Coast fleet. The idea was that one or two hits could be inflicted a turn, but actually the number of 6-1 results from the dice the Spanish rolled meant that they sank several ships at once. Mind you, the Spanish casualty was also a 6-1 roll.

I did wonder about the balance of forces and the scenario here. I mean, the galliots were hardly going to stand up to the might of the Aragonese navy, but I did think they might manage to slip the ambassador onto dry land. Historically, of course, the Aragonese navy managed, pretty well, to seal the coast from reinforcements from North Africa and that pretty well sealed the fate of Granada.

‘Ah, Ferdie, my dry and wet admiral. You achieved your objective, I understand.’

‘The ambassador is downstairs, my dear, awaiting your pleasure.’

‘Oh Ferdie, I only have eyes for you, you know.’

‘That is not what I meant, Izzy. But, now you come to mention it, do I get any sort of reward for being victorious again?’

‘Oh yes. I’ll let you have a glass of Rioja to celebrate.’

‘The warmest congratulations and thanks of the nation, of course.’

‘Oh, I’ll see if I can rustle something up.’

‘I didn’t mean some sort of trinket, my dear.’

‘I know Ferdie. But let us deal with the ambassador first.’

‘Business before pleasure, my dear?’

‘Well there are two other things, you know.’

‘Firstly, the new bedsheets have only just arrived, so I need to make sure they are installed. And secondly, it is my bath night tonight.’