‘They are coming Jez, don’t worry.’

‘Well, we need to delay them, Jez. And out situation is not all that clever really.’

‘The Lord himself fights on our side!’

‘Um. Well, that would be helpful. There are a couple of problems, though.’

‘Problems? What sort of problems could there be? Our cause is righteous!’

‘Well, the reckon their cause is righteous as well.’

‘They are wrong and we are right!’

‘Of course, of course. Would you mind putting that flail down for a minute, please? They are not here yet.’

‘I will smite all unbelievers wherever I might find them.’

‘Yes, of course. Try not to smite anyone just now Jez; we need everyone here.’

‘What is the other problem?’

‘Well, we are not in a great position here. If they get across the ford we could be in trouble.’

‘We are in this field and will smite the unbelievers from behind this hedge!’

‘Yes. But they might smite our troops over there in the open.’

Well, the Hussites are retreating from the ‘Small Town in Bohemia’ and need to delay their pursuers, the German Crusading army somewhat in order for the army to reach safety. Inevitable the warlike Jez and wagon crew have been chosen to be part of the rearguard. The terrain was not that favourable to the Hussites. 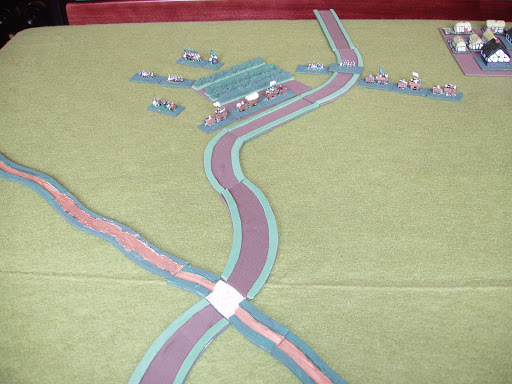 The picture shows the Hussite initial positions. The Germans will advance from the road nearest the camera across that bright blob which is a ford (I must have forgotten to stain it when repainting my stream sections). The stream runs all the way across the table. The Hussites have no suitable hill to station their war wagon on, so have taken to the edge of the fields and are strung out between the foot of a hill and the road. The wagon with the tilt, incidentally, is technically a Polish war wagon, here masquerading as an artillery wagon. I was most worried about the Germans outflanking the right of the Hussite position and so placed the mounted crossbowmen, half the bill men and the Bohemian knights to cover that flank.

After a few moves the Germans had arrived and were under bombardment as they crossed the ford. 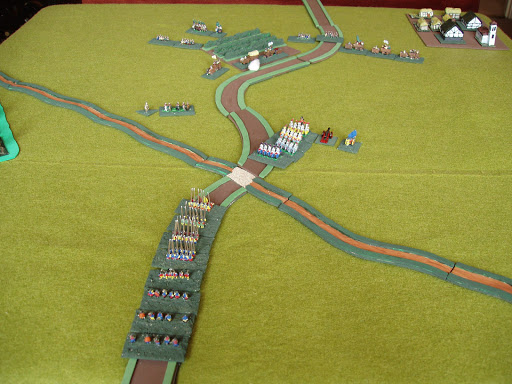 The knights are moving right, not left as I had feared. The Hussite artillery and skirmishers are not proving at all effective. The figures are all Irregular and the village buildings are from various manufacturers – Baccus, Leven and Irregular, I think.

The game developed with a furious German mounted attack on the Hussite left, while the infantry attempted to go around the Hussite right. After some initial hesitation, the German knights charged home and destroyed two out of three of the war wagons (the Achilles heel of the war wagons is that they cannot recoil by are destroyed instead). 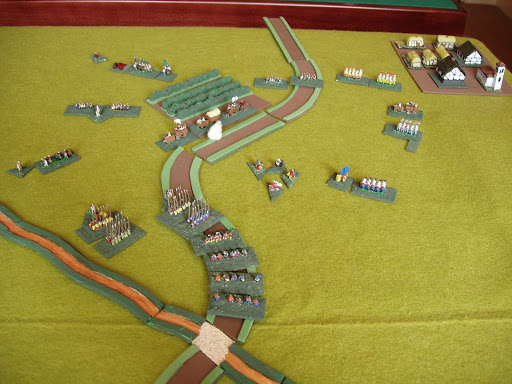 At this point, the Hussites were well and truly rocking with some bad dice rolls as well, and I was thinking that the game was over for Jez et al. 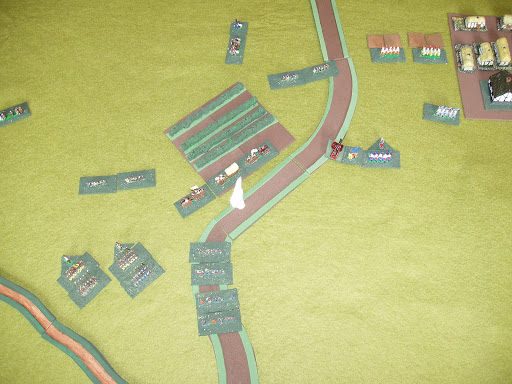 The drone’s eye view shows the situation declining for the Hussites. A follow-up charge has destroyed the last of their left flank wagons, while the successful German knights have rallied from their charge. Bohemian morale has slumped to ‘waver’ and it seems that the Crusaders could be well on top. However, at the top of the picture, the Hussite knights are moving to shore up their left and the German centre has stilled in the fire of the war wagons, so all is not quite lost. I did nearly throw in the towel as Hussite commander at this point, but a rearguard is a rearguard at the end of the day and fights on. 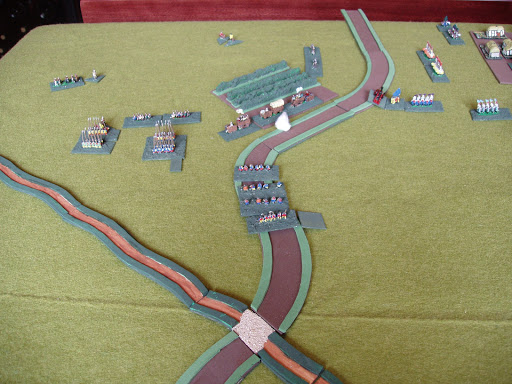 A few moves later and things have stabilised a bit on the Hussite left. The Bohemian nobles have charged some of the rallying knights in flank and they are now fleeing. The Hussite knights sensibly did not attempt to rally from their charge in the open but hid in the village while they sorted themselves out. The German knights have seen off one of the central Hussite war flail bases but the other is retreating into the safety of the fields. On the other flank, the flail men are giving the German spears a hard time; with the German general in combat, it was impossible to coordinate activity on this side. The central war wagons have also been disrupting the German centre.

The end of the battle came when the Hussite war flail men on their right beat the German spears handsomely and caused them to rout. German morale then slumped to ‘waver’ (the Hussites, surprisingly had recovered somewhat). 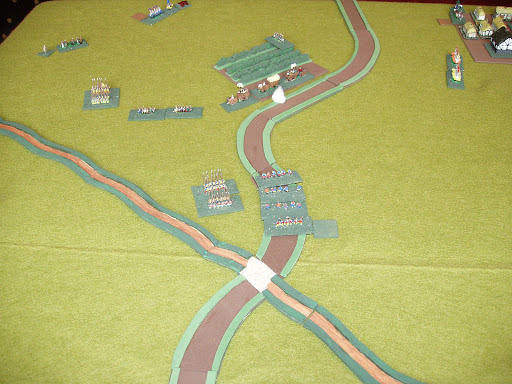 The German infantry has withdrawn towards the ford or, for the leftmost spearmen, towards the stream, while the knights have simply fallen back a move facing the enemy. The Bohemian knights are still lurking in the village rallying while the German general and his attendant knights are in the far distance, also rallying.

At this point I decided that the game was more or less a draw. The remaining German knights were unlikely to make much impression on the war wagons, while the Hussites are necessarily on the defensive. A draw is, of course, a strategic win for the Hussites.

‘Come back and fight you cowards!’

‘Um, Jez, it is all right. They are retreating.’

‘Just be happy that they are going. Then I can get this bramble out of my arm.’

‘We should be smiting the unbelievers!’

‘We did, Jez, we did. That is why they are retreating, you know.’

‘We have not smitten them hard enough!’

‘I think we have done enough for today, Jez. Let’s leave some smiting for tomorrow, eh?’

‘We shall not all sleep, but we shall all be changed.’

‘You’re telling me. When their crossbows started I nearly needed clean hose.’