The Battle of Ibiza

‘What is going on here?’

‘Chill out, kingy baby! Have a mug of something relaxing and join the party.’

‘Hey, Alex kingy, have you seen this?’

‘That? It’s a stick. Can I use it to beat some discipline into you?’

‘Nah, kingy. It’s a pipe. Look at this.’ The soldier put the end into the barrel, bent it over, and lay down beneath it. ‘Now, see, if I suck…’ The wine poured into the man’s mouth.

‘It doesn’t stop until the barrel is empty,’ his colleague said.

‘Want some?’ spluttered the prone pikeman.

‘Sire! Sire! A fleet has been spotted, coming from the east.’

‘Ah, excellent. Those will be the reinforcements the Queen Mother has organised.’

‘Um, the only thing is, sire, that there is another fleet coming from the north.’

Alexander frowned. ‘No reinforcements from there. Mummy didn’t say that…’

‘Awwww. Alexy kingy got mummy to send him some reinforcements because those nasty Moors beat him up…’

‘When the reinforcements get here, you will be punished for that comment.’

Alexander IV of Macedon has been, as I am sure you will recall (if not, read the Anabasis of Alexander IV page on the right), holed up on Ibiza after losing most of his army to the Moors. His next port of call, as it were, is Spain, to punish the Spanish tribes who have supported both Carthage and the Moors against him. To do so he needs an army; this is now sailing towards Ibiza, interrupting the party.

The Spanish of the mainland, or at least the Greek cities thereof (which I have noted as Valencia and Cartagena, but cannot remember why those two) are not too impressed with the idea of being invaded, and have dispatched fleets to intercept the reinforcements.

There are, in fact, two Macedonian fleets, one containing twelve bases of the Macedonian army, and one containing twelve bases of a late Persian army, recruited by Roxane, Alexander III’s wife and Alexander IV’s mum. These are contained in the merchant ships of the fleet. Also dispatched are ten triremes and five quinqueremes per twelve merchant ships.

The Spanish have fifteen triremes apiece, plus five penteconters each, giving a total of forty ships.

Lest anyone object that there are only forty-five ships in the photograph, there is another squadron of five to the far left, just out of the field of view. The Macedonian target is the bay on Ibiza, the island to the right.

The plans of the two sides were fairly straightforward. The Macedonians ordered their merchantmen to sail straight for the bay, ignoring all distractions, while the warships dealt with any opposition. The Spanish ordered their ships to focus on the merchantmen. The rules were my own ‘Are you sure they should be black?’ available from the rule page on the right, adjusted for large fleets. The ships are from Outpost, 1:3000th ancient range.

After a number of moves, the two plans started to shape up. 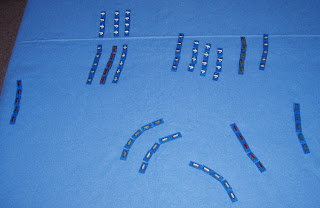 Both Spanish fleets have decided to concentrate on the Persian wing, initially, while deploying their penteconters as backstops across the bay. Both have also detached a squadron to try to outflank oncoming fleets and get onto the wings to deliver devastating ramming attacks. The main squadrons are beginning to deploy. 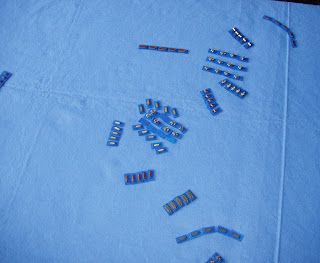 The first clash (above) shows a set of fairly devastating attacks on the Persian half of the merchant fleet. The entire left-hand column has been rammed and sunk while two more Spanish squadrons lurk looking for further opportunities. The flanking Spanish squadron has distracted the left-hand escorts sufficiently to expose the merchants but is now looking a bit vulnerable to the Macedonian heavies. At the top of the picture, the other flank squadron has forced an escort squadron to deploy into line to protect the merchants, while the Macedonian squadrons in the middle have also deployed. The quinqueremes of the Macedonian fleet continue to advance towards the Spanish penteconter line (which you can just see to the left) expecting, not unreasonably to dispose of them fairly easily.

A few moves later and the Macedonian misery has continued. 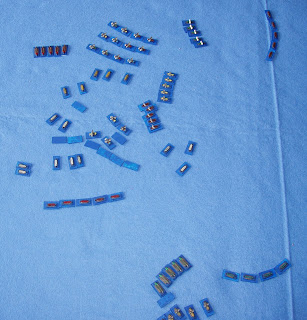 Further attacks have sunk more of the Persian merchants, while the Spanish right flanking squadron has pretty well evaded the Macedonian heavies and left hand trireme squadron. The Macedonian right heavies have been forced to deploy to protect the Macedonian merchants from rampaging individual triremes withdrawing from attacking the other merchantmen. 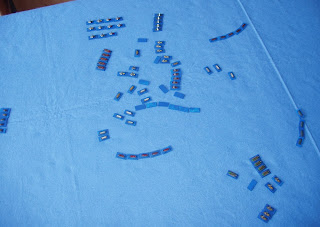 A move or two later and some degree of order is being restored by the Macedonian right fleet heavies. After the last naval battle, I had decided not to try and take them on with triremes, so even though the Macedonian fleet has lost a ship to a rogue attack the Spanish ships are mainly too far away to do anything and even a few Persian merchantmen are still extant. The escorts have also managed to sink one of the other rogue Spanish in the centre. However, the Spanish penteconters have started to redeploy to delay the merchantmen until the triremes come up. 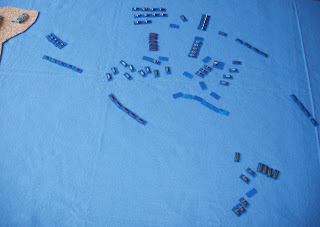 A move or two later and the Persian half of the merchant fleet has more or less vanished. The escorts are hampered by being deployed (you get combat advantage but move slower in line abreast than in line ahead). The Macedonian left wing is too far away to influence anything much now, while the right-wing heavies have turned to escort the merchants home. The Spanish penteconters and last organised squadrons are closing in, however. 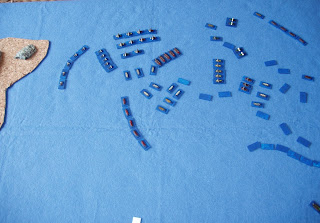 The penteconters are now blocking the merchant fleet while the rogue Spanish triremes lurk dangerously. One has even cheekily rammed a quinquereme (albeit to no avail). But you can’t sail a ship through another one…. 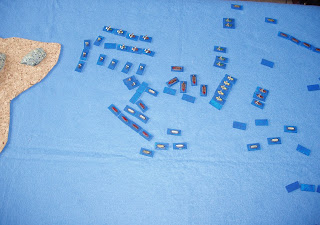 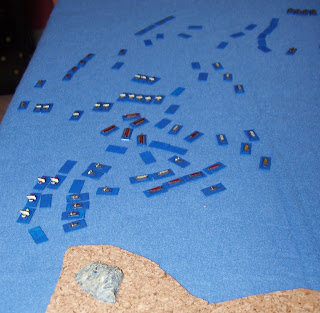 The final positions are above. The penteconters have attacked and sunk a few more merchants. The quinqueremes have taken out a penteconter or two, but now the wrecks are in the way of their coming to the rescue any more. An intact Spanish squadron is moving to take out the rest of the relieving forces. At this point, I called a halt: a decisive loss to the Macedonians.

The game was a great deal of fun, and also, I realised, one of the largest sorts of games I ever do with 94 ships on the table. That is more than twice as many as I usually have in land battles. The rules work and give a fast and furious game with lots of incidents, as I hope the large numbers of photographs show. Now all I have to decide is whether Alexander lives to fight another day or not.