'Vodkaschnapps, King of the Sarmatian Nation, To G. Inand Tonicus, Governor of Macedonia,

I wish to assure you, Sir, of the peaceful intentions of our tribe. We intend no ill to any man or beast. We will establish our nation on this soil and keep the peace if you agree not to attack us. As we have demonstrated, if anyone shows us hostile intention we will defend ourselves and our gods will grant us the victory of the rightness of our course.

‘Well, we had better go and see them off. The Emperor expects us to react and deal with such threats.’

‘Yes, sire, but the Dacians have already failed to stop them.’

‘I know. They are heavy cavalry and we are mostly infantry, but we’ve got to do something; doing nothing is not an option. At best we’ll spend our days admiring the shore on a small island. At worst we’ll be facing a significant haircut.’

The Sarmatians have, of course, moved into Roman Macedonia after their victory over the Dacians. The above conversation is about the usual Roman response to such incursions, at least in the early Empire, which was that the local garrison should get there quickly and nip anything untoward in the bud. G. Inand Tonicus, therefore, has to gather his troops and set out.

The slightly blurry initial positions are above, Romans to the right. The Roman plan was to hold the line of the stream, forcing the Sarmatians to come to them. Tonicus did not intend to get into a cavalry match with the Sarmatians, being both outnumbered and outgunned. However, he reckoned that the stream, and deploying some of his troops two bases deep, could hold and defeat the barbarians.

After their success against the Dacians, the Sarmatians, as you will see, have used a similar deployment, in two blocks. The idea is that their right will hold the Romans while the left outflanks the Roman line and rolls it up along the line of the stream. The Sarmatian lights, in the meantime, will amuse the Roman centre.

The troops are all Baccus, the trees are Irregular. The regular reader of this blog might notice a slight difference in the sections of road and stream. As part of my ‘lockdown’ wargaming activities, and my Easter holidays, I have redesigned and rebuilt my rivers, roads and stream sections. It turned out I had quite a few, and it took a while, but the sections are now reinforced with ‘banks’ of another layer of foam, and that seems sufficient to keep them from curling up, so far at least. What you cannot see is that the new sections are, in fact, on the underside of the old which meant that purchase of craft foam and such like was not necessary: probably just as well as, however important, foam purchases could hardly be deemed essential.

Anyway, the next picture shows how the plans were developing. 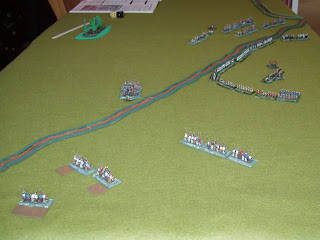 The Roman left flank cavalry had advanced to the stream, rather incautiously and had attempted to cross it and charge the leading Sarmatian cataphracts. However, the infamous crocodile-filled stream of Polemos SPQR had prevented one base crossing, the other two were countercharged and routed by the Sarmatians. This led to a wholesale right-hand move by the Sarmatian centre, the second block of three bases of whom charged the remaining Roman cavalry base and overwhelmed it. Being well out on the right and a long way from the Roman lines the cavalry had the opportunity to rally from their pursuits. The first wave is rallied and lurking ominously towards the right of the picture, the second wave just rallying to the left, while the original left-centre of the Sarmatian army is about to cross the stream. On the far side, the Sarmatians have deployed their cataphracts as the Roman reserve cavalry blocks their crossing of the stream. The Sarmatian lights and Roman bolt-shooter are exchanging shots, more or less ineffectively. Tonicus has felt obliged to pull his second rank from the centre and send it to the left to shore up the refused flank there.

The whole thing was starting to feel a bit like Carrhae, and household duty called at this point. In the meantime, something tugged at the back of my mind about the Sarmatians as I pondered how they were going to try to crack the Roman position. Re-reading the army list in PM: SPQR gave the answer – all Sarmatian cavalry can act as skirmishers. The result was that the Sarmatian left started pelting the Romans with arrows, javelins and whatever, leading to the wilting of the cavalry and the destruction of the bolt shooters (deployed artillery cannot recoil, and they suffered a 6-1 roll).

In a desperate attempt to find a Roman solution I sent the archers forward to try to catch the Sarmatians crossing the stream. This failed and the archers were charged in their turn and, doubtless seeing how the wind was blowing, immediately routed. Roman morale at this point was surprisingly good for a force having lost 6 bases to none, but in the campaign context, Tonicus’ only option was to retreat while he still had some cavalry to cover it. 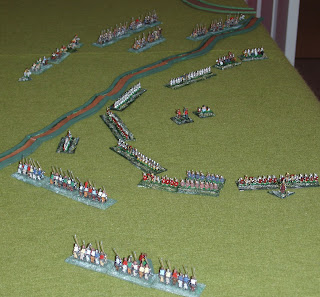 The end is shown above. The leftmost Sarmatian cavalry nearer the camera have just routed the archers, the rightmost are advancing on a mixed force of legionaries and auxilia. In the distance the Romans are pulling back from the stream edge under the barrage of skirmishing, while the rest of the Sarmatian cavalry waits its chance to cross and wreak destruction.

‘Why did the cavalry get so far ahead? What were they thinking of?’

‘Well, at least we got the rest off in good order.’

‘Ah, yes. Round up any passing archer and execute every tenth one, would you, please.’

‘Um, if we are going to stand a siege, sire, we might need some archers.’

‘Good point. Good point. Um. Well, round them up anyway and try not to execute many of them. A good job we have some decent fortifications around here, isn’t it?’