As noted last time, I have a wide variety of early modern armies to choose from as a result of the rebasing project. Given my predilection these days not to simply conduct ‘line both sides up and charge’ types of battles, I feel the need for some narratives to push the stories of the campaigns along. Each set of armies, therefore, need a theme, a running story like the Armada campaign (the next battle for which is on the cards, sometime) or young Alexander’s adventures.

The sad fact is that I am all out of stories at the moment. My reading lately has been a bit too lacking in military themes for my own comfort, perhaps, but I really cannot, at present, connect with any ideas that I might have come up with. For example, I thought about redoing my Invasion of Korea campaign from many years ago, but that might entail buying and reading at least one book on the topic, and I have a shelfful to get through already. Indeed, I and the Estimable Mrs P. have agreed to a three-month moratorium on purchasing books while we tackle our backlogs.

Being, therefore, thrown back upon my resources as a historical wargamer, and in the light of reading about Isabella of Castile, I pondered a narrative about the Granada campaign, but I could not get excited about that.  But something about the Spanish intrigued me, so I dusted off my trusty Oman and started to read. Slowly a battle came to mind, a historical one at that. I would try my hand at Seminaria.

I dare say that I do not need to introduce the battle to my audience, but I’m not going to let that stop me. This was, more or less, the first action of the Italian Wars and was heavily lost by the Neapolitans and their allies, the Spanish. Oman has about half a page on the battle. I consulted Peter Sides’ ‘Renaissance Battles Volume I’ but discovered, I’m afraid, a bit of a dog’s breakfast. Sides, it seems, was led astray by the DBR lists for the army. Oman’s account definitely refers to jinites; Sides’ Spanish have no such thing, at least that I could find.

Wikipedia (purists may shudder, but it can be fairly reliable when all else fails) reckoned up the forces involved more accurately (perhaps; as is often the case, the sources are unclear) but still left a lot of wriggle room for exactly how many Neapolitan militia were present, and how many French (as opposed to Swiss) infantry were there. I have commented before that historians tend not to worry overmuch about such holes in the data, but wargamers do.

The numbers, according to Wikipedia consisted of 600 lances for the Spanish (careful; this does not mean men at arms), 1500 sword and buckler men, 3500 sailors, 6000 Calabrians and an unknown number of Neapolitans. All of this was less men left in garrison. The French had 400 gendarmes, 800 light horse, 800 Swiss pikes and an unknown number of French infantry. The armies both deployed with a centre and a wing of horse, which faced each other. I have no idea why the other wing was not similarly en-horsed. It might have been terrain, but the sources only mention a stream between the lines.

Anyway, some desperate counting of bases of figures and working out a few bits of ratios led me to the following orders of battle:

I confess I have no real idea as to how these map onto reality (hence the title of the post), but then, no-one else will either. It is also slightly juggled with to fit my resources, especially in crossbowmen. All the crossbows, incidentally, count as skirmishers. The Spanish sailors are deployed as crossbowmen largely because of a comment in McNeil about the adaption of crossbows on Spanish and Portuguese ships of the time. 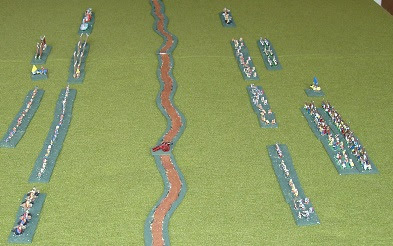 The Spanish / Neapolitans are to the right, the French to the left. The French were to attack with the gendarmes and Swiss (on their left). The Spanish were hoping to disrupt enough with their crossbowmen before contact was made, and to entertain the gendarmes with the jinites (on their far right). As one of the reasons the Spanish – Neapolitans lost seems to have been that the militia interpreted the backwards, skirmishing, behaviour of the jinites as fleeing, and followed suit, each time a Spanish base moved backwards the militia were to roll two dice, one positive and one negative. On a negative result, they fled.

The end game is here: 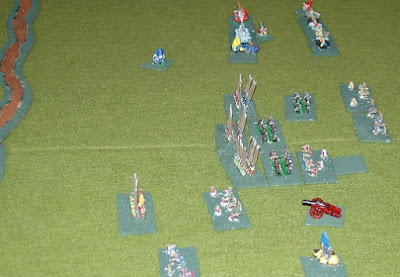 With the exception of one shaken base of crossbowmen, the Spanish centre is fleeing. Remarkably, the militia are still holding firm, but as the French have not bothered to attack them, perhaps this is less of a surprise. On the other hand, they survived a lot of matched rolls. The skirmishing crossbowmen managed to inflict precisely no damage on the Swiss except for a slightly disruptive halt result (which is why the fourth Swiss base is behind the rest). The jinites have done their job, but it has not helped the rest of the army. The Spanish – Neapolitan morale was still good, but it was clear they had lost.

So, this turned into a splendid, historical result. Seminaria was Gonzalo de Cordoba’s (aka ‘the Great Captain) ‘most disastrous’ battle and caused a rethink of the Spanish military. Certainly, the Spanish had little reply to elite Swiss pike here.

‘Sire, we have lost, and lost badly.’

‘Agreed. We need to do something about that.’

‘Yes. We need to change things, clearly. I sense…’ Sudden thunder rumbled from a clear blue Italian sky. ‘I sense a military revolution coming on.’