The next approximate battle in the Italian Wars should be, of course, Fornovo. But Fornovo is first, probably somewhat beyond my current abilities, and second, it was rather a complex battle and not one in which the rapidly changing Spanish forces were involved.

Let me, therefore, fast forward to Cerignola (28th April 1503) for my next trick. The Spanish were behind some entrenchment, armed with pikes, firearms, crossbows and cannon. The French had gendarmes, Swiss pikes and their skirmishing crossbowmen, which seem to have been mainly around to make up the numbers. The Spanish jinites were deployed in front of the entrenchments, and seem to have obscured the view of the French and Swiss. On the other hand, neither the French nor the Swiss seemed to be much in the mood for scouting; they did have light horse, but they don’t seem to have been used. The Spanish men-at-arms were held in reserve.

Here, I hit a rule development. Normally (in DBR and, indeed, in Polemos: SPQR) skirmishers are regarded as being rather few in number. If you regard the French infantry as being mostly skirmishing crossbowmen, then at 75 men per base, you get between 33 and 47 bases. This is rather a lot of bases and would take up a large quantity of table room. My view of skirmishers has evolved, and so I have incorporated them in the normal 1:500 ratio which I try to use for foot (1:250 for the horse, by the way). Those of you with long, long memories will recall that the model for skirmishing is a base unit with small groups sent out to discharge their weapons. The base marks the location of the base unit. I can thus reduce the number of French infantry to a more reasonable 5 bases of skirmishing crossbows.

The forces on the table are, therefore:
Spanish: 3 men-at-arms, 3 jinites, 2 arquebusiers, 4 pike, 2 ‘others’, which I am interpreting as a crossbow base and a sword and buckler base. They also have 2 cannon bases.
French: 3 gendarmes, 4 light horse (a mix of mounted crossbows and stradoit), 7 Swiss pike and 5 skirmishing crossbows or pike for the French infantry.

The set up is shown in the photograph. 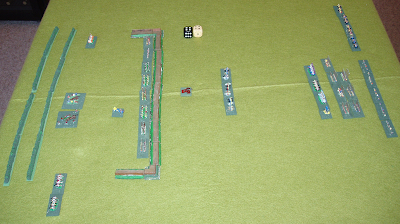 The Spanish are to the left, behind their entrenchments, at the foot of a vine-strewn hill, upon which the cannon are placed. The jinites are in front of the entrenchments, nervously eyeing the gendarmes and Swiss. The French light horse and crossbowmen bring up the rear.

One of the Spanish cannons is the out of focus blob to the right, and you can see the line of jinites in front of the French and Swiss. Behind them are the rest of the French army, who turned out not to be particularly interested in the proceedings.

In the real battle, the French gendarmes and the Swiss simply charged and the gendarmes discovered the ditch and bank first. Under heavy fire, Nemours attempted to find a way across and was killed by an arquebus ball. The Swiss arrived and did little better. Once the French and Swiss were bogged down, Cordoba ordered a counter-attack and they fled.

In my battle, things were slightly different, but only a bit. The French gendarmes managed to hit the jinites without being disrupted by the skirmishing and swept them away. However, they then found that cavalry against manned entrenchments only goes one way. They did, very briefly, gain a slight hold on the top, having forced back the Spanish sword and buckler men, but it didn’t last. Turning left, the gendarmes sought a way around (a bit late, you might think). Nemours survived, but the gendarmes were hit in the flank by the Spanish men-at-arms and routed, including the general who, this time, seems to have perished at the point of a lance (I’m sure that is more honourable than a musket ball).

The Swiss then attacked and fared rather worse. In fact, their approach was disrupted by the cannons on the hill and some of them never got into action. In these rules, it seems, cannon are rarely decisive but often disruptive. The Spanish were on the receiving end of this in the Guisborough fight in the Armada campaign, you might remember. 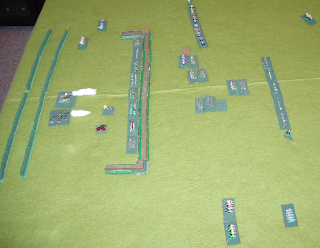 The remaining French gendarmes are all fleeing, while the Swiss are either routing, halted under fire or being ‘staggered’ by cannons. The French crossbowmen and light horse have not really been ordered to do much, due to the general being too busy charging and then incapacitated.

So, once again, history roughly repeated itself. It did get me wondering, however, about bias and, indeed, whether the battle was even possibly winnable for the French in its original form. Waiting for the next day and their cannon to arrive would probably have been a favourite option. Alternatively, working around the flanks could have worked. As Spanish commander, I was a little concerned about all those skirmishing light horse, especially after most of my jinites had been dispersed.

I suppose that cavalry against manned entrenchments, especially when the entrenched side have firearms and crossbows (the rules do not, at present, distinguish) was never going to be an easy match up, and nor were Swiss against the same thing. The historical outcome probably speaks volumes about the usefulness or otherwise of chivalry and rash bravery against ranged weapons in prepared positions, but then that is a lesson which many nations have had to learn the hard way.

I was, however, quite pleased with the rules and how they worked. The next battle is, of course, Garigliano, but that is a sprawling, complex battle. Having tested the rules in two semi-historical battles now, I might try a different time and part of the world.