With the predictability of a window breaking during a game of garden cricket, the protestations about sizes of wargame armies and wargame tables that the dedicated reader of the blog might recall from last year have been overtaken by, well, the eyes of the wargamer. In short, the table has grown: 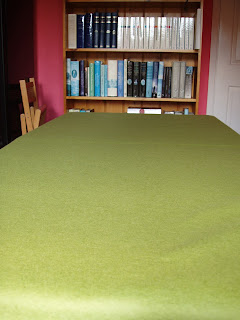 Now, the above is likely to gain me a prize for all comers most boring blog photograph. If, however, you are anything like me, you will spend hours of endless fascination attempting to identify the books at the far end of the tables.

To be consistent I have to insist that my arguments about force to space ratios, flanks, and all the rest of it remain unchanged. Nor will the action at Coldingham be on a larger scale than before – it will be fought out on the same basis as was posted last week. I am not doubling the size of the armies. Honest. No, really, I’m not.

The issues, such as they are, have nothing to do with the land battles, at least, of the Abbeys Campaign. The increase in table size does have a little to do with the naval aspects of the campaign, of which progress has just been a few scribbles of rules on a piece of paper (give me some kudos – it was a proper piece of paper, not the back of an envelope). After all, more space is needed for your average naval battle than for a land battle as ships have a tendency to move a bit and falling off the edge of the world seems to be a bad idea.

The real drivers for the increase in table size are two-fold. Firstly, there is the issue of my ancients battles and armies. Some of you may recall that, a long time ago, I starting a ‘doubling’ project. That is, I aimed to produce a second 20 base army for each army I already have. Progress has been a bit on the slow side for reasons of sloth, real life intervening and an unfortunate inability to count. To explain the last bit, I now have, for example, 57 bases of Ancient Spanish.  You might easily note that the remit, for 40 bases (forty is, as I’m sure you know, twice twenty – I have two degrees in numerate subjects but you would not know that from here) has been exceeded.

Admittedly, calculational dysfunction is only part of the reason (although it is, embarrassingly, part of the reason). I have also been reducing my lead pile. Mr Berry of Baccus was kind enough to note that the Spanish foot that he cast and I was painting have been out of production for many years. He suggested keeping them in pristine condition as antiques. I fear he may have only been partially joking. Anyway, the upshot of all this is the aforementioned overproduction of bases of figures, although I still have some left over Spanish foot to preserve and, hopefully, sell, to augment my pension.

Now, for those of you who have kept reading thus far, a point is about to emerge. That point is that a twenty base army fits, just about nicely, onto to the original 80 cm square table. There is not much room, granted; my troops are based on a defiant standard of 40 mm width, and even my mathematics is up to the calculation that shoulder to shoulder they fill the entire width. Still, even the most naïve wargamer does not always put his toys in a single line.

Nevertheless, there is a problem, given that I like the wargamer to worry about things like flanks. It is possible to fill up the width of the table, pretty well, so that the edge of the wargame world is the flank guard, even if some bases are held back in reserve. So a bigger width of table is really called for.

The other issue is that of rolling dice. In my youth, I had a six foot by four-foot table, which had six inches at each end marked off. This was to provide room for boxes of soldiers, reserves, rules, drinks and the rolling of dice. If the whole table is required for deployment (and even a twelve base army needs some room) then one’s dice rolling activities have to be on the battlefield, and, usually, the dice roll either onto the more important bits of the action (potentially displacing toy soldiers, of course) or land up on the floor. I know that dice rolling trays are available, and I might yet invest in one, but I would have to put it down somewhere.

Finally, of course, there is the fact that a wargamer is always looking for the biggest, the best, and the shiniest. Most wargamer’s collections seem to grow rather than shrink. Mine is no exception, but I really, really have sworn off expansion on any major scale. I am planning to have firstly, a lot more wargames (justifying the investment in real estate) and to expand my rebasing project, to include my extant Muscovites, Poles, Ottomans, Mughal and other Indians, Vietnamese, Chinese and, yes, you’ve guessed it, Tibetans. But I have no real expectation that an expansion in numbers will be required, except on a very modest scale.

So, there you have it. This is my last territorial claim. My empire shall expand no further; it has hit the limits of resources and energy. With this I shall be satisfied. Twelve base renaissance armies are the bee’s knees; twenty base ancient armies are also the bee’s knees. I think we have a deformed bee, here, but you get the point. We go for quality, not quantity.

And you can believe all that if you will, but I cannot fit another table into the room.