So, what is going on here then? 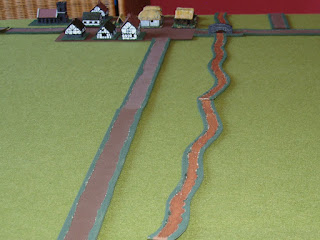 This is, of course, the mock-up for the next Abbeys Campaign battle. The government forces are advancing from the north, nearest the camera, heading south to succour the English forces opposing the Armada break-away army landed at Whitby a couple of battles ago. The Scottish Catholic ‘rebels’ are advancing from the west, that is, from the right.

The point of conflict is the bridge at Coldingham. The government forces have to exit the table, along the road on the far side, right of the bridge, heading, naturally, south. The rebel forces have to stop them and nip the intervention in the bud.

The photograph is, as I mentioned, a mock-up. I have to make a few extra road sections to ensure everything fits. I would also like to paint up the six Scottish pike and six shot bases I have (half of which are on the painting stands as I type) but reflection on my painting to playing ratio suggests that perhaps having a wargame to keep the momentum going might be an idea. After all, I have a sufficiency (if not a surfeit) of pike and shot bases for the game, even if they are not specifically Scottish.

That, of course, raises another issue, that of the army lists for Scottish forces in the later sixteenth century. This suffers from a bit of a hole in history – the Scots were not really involved in any large-scale conflicts in the period. That is, from the defeat of the French in the early 1570’s, until the first Bishop’s War in 1639, there was no large-scale military activity in Scotland.

I use the term large scale advisedly. There was a lot of small-scale activity, on the Borders and, I imagine, in the Highlands and Islands. The Scots were also peripherally involved in the Tyrone Rebellion, both as suppliers of military hardware and as mercenaries. But it is not as if specific Scottish armies were involved.

This, incidentally, raises another marginally interesting issue. The DBR army lists for the ’Scots Common Army 1513 AD – 1602 AD’ claim that the Scots had no firearms up to the terminus date of the list. My limited historical resources would beg to differ. A ‘contemporary sketch’ of Carberry Hill, 15th June 1567 seems to me to clearly show Scottish foot armed with firearms:

According to Wikipedia (OK, not a great source), Mary had about 200 hagbutters at Carberry.

Looking a bit further back in time, Caldwell observes that the Scots, in the aftermath of Pinkie and the mauling given to the army then (1547, as any wargamer will know) the Scots took a serious interest in hand firearms. Arran could (or did) deploy rather few, although handguns were not unknown in Scotland. As the Scots relied on the pike, it is possible that they simply did not fit the tactical plan.

The upshot of all this is, of course, a problem for a wargamer engaged in an imaginary campaign tied to a historical context. There are other issues as well. Mention ‘Early modern Scottish army’ to most people and they will inevitably think of hordes of wild highlanders rushing down hills at people. As I mentioned in the Sherrifmuir post, while this is not entirely fictional, it is not wholly accurate either. There is thus much pondering of imponderables.

I do overthink things, I know. At some point, a plunge has to be taken, and so I can hazard a guess as to what these armies will look like. The rebels, having moved through border country, may well have an advantage in light cavalry; on the other hand, the government will probably have the edge in heavier cavalry and musketeers. The question of what the heavier cavalry might be is a bit questionable. Famously, the Scots went into the English Civil War with lancers, although they did have more conventional sword and pistol cavalry as well. It seems moderately likely that any heavier cavalry would be of the lance armed persuasion.

This probably ensures that there is sufficient difference between the two sides to give an interesting game.

Tactically, the rebels have to seize the bridge at Coldingham. If they can manage that, the government forces are going to struggle, although the stream is passable. Google Maps suggests that the banks are quite steep, at least in the town, but the water is neither deep nor wide. It is also quite possible that it has been canalised in recent decades (or centuries).

The rebel advance will, therefore, have to push the light horse forwards to grab the bridge, and then hope that they can hold it long enough for the rest of the army to come up. It is always possible that the two sides will negotiate rather than shoot at each other from that point, which would probably be a winning draw for the rebels. However, the government army can try to cross the stream and then take the bridge from both sides. As I discovered in the action at Guisbrough, taking a bridge when it is actively defended, even by musketeers, is a tricky option. This one has the added complication that government forces would have to advance through the town first, which will give them a terrain disorder marker to start with.

Quite what the highlander contingent will be doing during this is anyone’s guess. They are not really adapted to urban warfare or the holding of terrain items. Perhaps the best bet is to deploy them as flank guards back from the stream, to charge any government forces that try to cross while they are still disordered from doing so.

It could be an interesting game – I hope so anyway – and the dice will, I’m sure, have something to say about the situation. Now I must paint those new road sections…..