Don Pedro, count of Vina Soro, turned away from his scrutiny of the coast and allowed a thin smile to grace his lip. Caught napping, he thought. Even from this distance he had seen the thin smoke from camp fires rising from behind the castle tower, but the blaze of the warning beacon was only just going up.

A man approached, feet padding on the deck planking. The stays creaked. ‘My Lord, the men are in the boats’.
‘Excellent.’
‘We await your order, my lord.’
Don Pedro nodded. ‘One moment.’ He looked across the deck. ‘Father?’
‘My Lord.’ The black clad priest looked around.
‘Do you see that?’ Don Pedro pointed to the ruined abbey high on the hill over the harbour. ‘This evening, if God wills it, you will celebrate Mass there.’
‘The Lord’s will be done, my lord.’
Don Pedro glanced around. The men were truly in the boats, looking nervously at the shore and around them at the bulk of the ships towering over them. The messenger cleared his throat.
Don Pedro looked at him, at the shore and back again. ‘OK,’ he said, ‘Let’s go.’

The singing swelled in the evening sun. The chill of the wind was keener here, on the top of the hill. Don Pedro sat back and shut his eyes. In the sombre chanting of the Solemn High Mass his mind drifted over the events of the day: the scramble down the netting into the boat; the pull to the shore, with puffs of angry smoke from the battery on the harbour wall; the splash through the wavelets onto the beach. He could still feel the sand of England between his toes. He really must change his socks.

The English had not put up much of a fight. Only a militia unit in the village and a couple of cavalry squadrons had even really tried. From his position on the right, Don Pedro had watched with professional incredulity as the English troops from Whitby had failed to deploy properly and had then been thrown into confusion by a well-directed volley of arquebus fire from his own men, just landed on the beach. After that the English had just seemed to melt away, leaving the harbour to the armada. By lunch time the first of his ships had docked, unloading horses onto the quay for the waiting gendarmes, who would be very glad to resume operations several feet above the waves.

The voices swelled in the gathering darkness. The first proper Mass for fifty years was reaching its climax. Behind, Don Pedro could hear a crowd of curious English people, townspeople from the port, crowding into the back of the shell of the church. The mayor, when he had come to make his peace, had explained that the place had fallen on hard times when the abbey had been dissolved. Now the people hoped for better things.

Well, maybe, and maybe not. Such hopes were beyond Don Pedro’s remit. So far he had done his duty to God, King Phillip and the Duke. There would be more and harder fights ahead, he had no doubt. But for now he could rest content with a good job done.

The picture shows the situation at the end of the action (a picture. Of soldiers. And on this blog, too. Whatever next? Some decent pictures, probably, but that won’t happen). 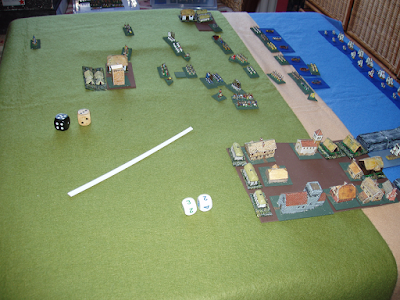 This is from the right rear of the English position. Whitby town is in the right foreground with the harbour to the right. The English command position and trained band camp is left middle. In the distance you can see the English cavalry and Sandeford militia fleeing. Sandeford (Sandsend, as it is today) is in the distance, and the second wave of Spanish has just hit the beach. The Armada is, of course to the right, in the sea. 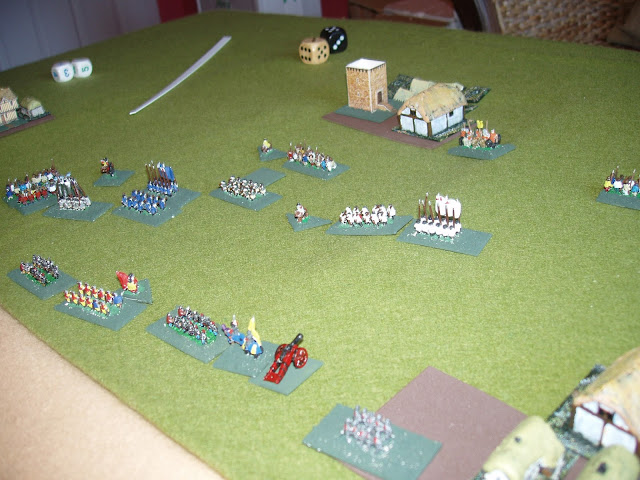 This is the view from the other side. Don Pedro (with the yellow flag) is in the foreground just to the left of Sandeford. Sneaton Castle and the English camp is in the middle. The big red cannon in the foreground is the tempo marker. The English general is just beyond the blue coated fleeing trained band; he was trying to untangle the Whitby militia march column before it got taken in flank by the Spanish. As you can see, he failed.

The figures are mostly Irregular, although the untrained militia are Baccus. I am not sure of the provenance of the tempo marker, although I think it might be Baccus. The buildings are a variety of sources. I think there are some old Hovels cardboard buildings, some old Baccus resin ones (the hovels and one of the churches in Whitby), plus some Timecast Saxon buildings. The naval guns and crews on the harbour wall are Langton Napoleonic models. The Armada vessels are 1:2400 Hallmark. The harbour walls are Irregular's Aztec causeway, and the ship in harbour is Speaker in 1:1200, but I am not sure which manufacturer, Navwar probably. All of it terribly assembled and painted by yours truly.

And so to some pondering:

I was quite pleased as to how the game went. The rules, for all their incohateness (is that a word) seemed to work quite well, although there is some nuancing to be done. The Spanish showed a remarkable propensity to get and keep the tempo, which slowed the English reaction and deployment, and secondly a startling ability to throw a six when the English threw a one. On the other hand, they did show more aggression than the English. The demi-lancers refused to charge so, in the next bound, the Spanish sword and bucker men under Don Pedro’s command simply advanced into them and the demi-lancers fled (on a 6:1 roll). A similar thing happened with the staves also seen fleeing in the pictures. The only real resistance was from the Sandeforde militia, who held off the elite dismounted gendarmes for a couple of turns.

The nuancing of the rules is mainly in the army morale. I worked out a neat way of downgrading performance when morale drops without completely destroying the army, by the wavering level indicating that all advance orders are switched to hold. Thus the army hesitates when things seem to be going against it.

Anyway, I enjoyed it, although I confess that the battle was fought on the feasts of St Stephen and St John, not on Christmas Eve night. You might wonder about the campaign name. I have just invented this. The idea is that the next battle will be fought at the next dissolved abbey inland which is, I think, Guisbrough Priory. All right, technically it is not an abbey, but it was wealthy and one of the bases for the Pilgrimage of Grace.
Posted by The Polemarch at 02:00