This blog is starting to have as many farewells as Frank Sinatra, but here goes. The last bit of unfinished business was about some markers for recoiled but otherwise undamaged bases. Aaron came up with a good idea which has been implemented.

Slightly out of focus, I know, but you’d expect that from my camera abilities by now, and given they are only 10 mm wide by 20 mm deep I don’t think I’ve done too badly.

And here is one in action, marking an unfortunate base of Thracian peltasts down as losers. The peltasts are only unfortunate, however, to have been completed in the same batch as the markers, and so used for an example. 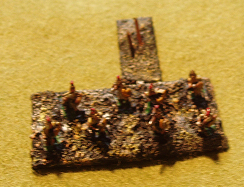 And now I really am going to have a rest, but I do have an idea for how to take to blog very slowly forward, so do pop back in October.
Posted by The Polemarch at 02:00