‘Why are the heretic cowards skulking in there?’

‘Perhaps they have been hit with a spirit of fear by the Lord, Jaz.’

‘They should come out and fight like the heretic cowards they are!’

‘Um, Jaz. Heretic cowards, by definition, would not come out and fight. Due to being cowards, like. You know?’

‘Are you on their side?’

‘No, no. Just trying to explain. The Lord our God gave us brains to use as well as, um, fanatical faith.’

‘I am not a fanatic! The Lord really does speak to me and I call them heretic cowards! HERETIC COWARDS!’

‘Yes, Jaz. Now, perhaps, a nice lie down in the cool and dark of the wagon will help. It's going to be a long siege.’

It has been a long time, or so it feels since the Hussites hit the table. So I thought I would drag them out and see how the rebellion was going. As you might have divined from the above, Jaz and her fellow war wagon drivers have pitched up outside a castle held by a German Crusader army.

Initially, I was going to wargame the approach and deployment, but as the German noble cavalry (4 bases) and skirmishers (2 bases) faced up to the proto-besiegers (24 bases, plus some big bombards) the nobles did the only truly noble thing they could and rode off into the sunset shouting ‘Stand firm’ over their shoulders, and ‘We’re all in this together’, and promising to bring aid. So much for the public school educated.

Anyway, that left the situation as in the picture. 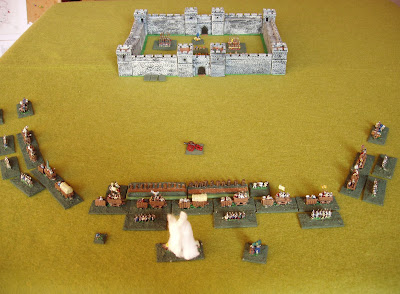 Now, even with two armies, there are not really sufficient troops to surround the castle (Leven Miniatures), but the game was meant as another outing for my playing card-driven siege rules, with hopefully slightly less wacky results than last time. Nevertheless, you can see the results of the first few cards drawn. The Hussite main magazine has exploded (foreground) and part of the castle wall has already collapsed (3 points damage to the left of the gate). Obviously, health and safety and maintenance rules are being laxly enforced on both sides.

The game proceeded quite nicely. The trenches were dug, the batteries established and only a few unwanted events were found, which kept the game moving but did not bog it down in too many events so the generals were totally disempowered. 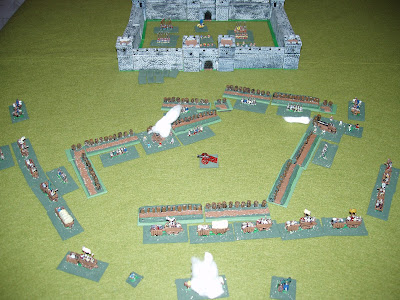 Above you can see the siege works advanced and a breach has in fact been created in the already damaged wall section. The next card drawn informed me that a wall section had collapsed. The Hussite billmen attempted to storm the breach but were held off by the German spearmen. Along the way a Hussite battery had exploded; clearly, inexperience with gunpowder was telling.

After the storm was repelled I had to do a bit of pondering on behalf of the Hussites. As has been noted, under the rules (in fact, it should be under any rules) bills versus pikes or spears is a bit of a slog. Both have high factors and it is difficult to get a result. In the above storming, the Germans were able to flank some Hussite blades and destroy them. I realised that I was lacking a bit of firepower.

Now, Hussites have firepower. They are famous for it, with the war wagons occasionally being described as prototype tanks (which they were not, but anyway). I noticed that the war wagons could not really be deployed closer to the walls, but that the crews could be. The Hussite war wagons were crewed by folks with both handguns and crossbows, probably a lot more of the latter than the former in reality. So, I thought, I can dismount some of the crews and have them shoot through the breach to clear the way for another assault. Another round of card drawing or two left the Hussites attempting to demolish another wall section (and failing) while pushing their trenches ever closer to the breach. 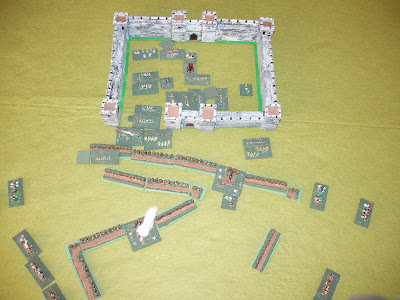 The above shows the final assault. Hussite firepower pushed the German crossbows back from their temporary defences inside the breach and enabled the billmen to go in again. This time the disruption from the firepower was such as gave the Hussites the upper hand in the combat, and they prevailed, albeit just. The castle surrendered.

I confess I was pleased with how my siege events table worked out. It might have helped that I did not draw any of the mine and countermine cards, of course, but I would probably have simply ignored them. Nevertheless, the cards added colour to the game, with a sudden wall collapse, exploding gunpowder, and, at the last, an immense burst of energy enabling the Hussites to push their trenches right under the walls.

In the game the defence was rather passive, I admit. That was partly because I wanted to test the rules, rather than fight a siege wargame, but also because without the knights the German Crusaders are a bit low on options in a siege. I should have probably given them some more firepower as well. Although they do not seem to have used handguns or cannons on the battlefield, they did on walls and in sieges.

Still, it was a good game. I think my rules are advancing to the point I can conceive that a siege wargame could be interesting and give some difficult decisions to both players, as well as a few random events to cause a bit of head-scratching. At one card each per siege turn, with only half the cards being relevant, you get a nice slow flow of randomness and can make plans. The game, as I recall, took 13 siege turns and two bursts of tactical action in the storming. I have not quite worked out how long a siege turn is, yet. Maybe a few days.

‘We are triumphant! The gates of Hades cannot stand against us!’

‘Any place where the unbelievers reign is Hades! But the Lord of Hosts has overcome. We march triumphantly against sin, the world, and the Devil. Whose round is it?’