‘I say, Jaques old chap, what is that place over there.’

‘Monsieur, there is no-one here called Jaques. My name is Guilliam.’

‘What does the English idiot want now?’

‘The name of the castle over there.’

‘Is it nearly lunchtime?’

‘What did he say, Guilliam?’

‘We’ve only just had breakfast.’

‘The castle looks interesting, you know. Could we stop there for lunch?’

‘Monsieur Ambassador, the chateau is held by the enemy. They wish to prevent the treaty arriving in England and preferably dismember you.’

‘The garrison is turning out, Guilliam. They’re going to block the ford.’

‘Humbug? Is that the best you can do?’

‘I didn’t want to say merde for fear of our guest asking what it means.’

‘Fair enough. How did he get to be ambassador anyway? He doesn’t seem very bright, and doesn’t speak French.’

‘Perfect ambassadorial material then, I guess.’

If you are at all interested, you might recall the Corbie campaign, which started off with a battle and a siege between the French and Spanish Netherlands armies in the late 1630s. Things proceeded and the English government and the French negotiated a treaty whereby both would attack the Spanish. This would blunt the Spanish invasion, from the French point of view, and get Charles I’s anti-Hispanic lobby off his back, thereby preventing the English Civil War. The first skirmish saw the Spanish block the English from seizing the road, and the latter retired towards Calais, where they hope to hire a ship to take the ambassador and treaty to England. The Spanish manned a castle (which I noted a few weeks ago I found in a box) to block the road along which Sir Thomas Bagge (‘Call me ‘T’’) and his escort (a motley crew of French adventurers, led by a Musketeer, naturally) must pass.

The light conditions were not good for the photographs, so I’ll have to describe the scene. At the top left is Chateau Crepé, on a steep hill. In front of it are a river and a ford where the road crosses it. The garrison is six figures, while the Ambassadorial escort is of the same strength. Sir T Bagge (did you see what I did there?) is unarmed.

The Spanish got five moves warning of the French arrival and just about made it to the ford. I would have preferred them to cross the river and defend from the other bank, but it was not to be. The garrison was dismounted, while the French remained on horseback. 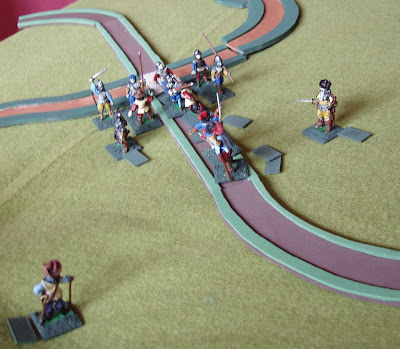 The picture shows the clash at the ford. In the left foreground is Sir T, ambling towards the castle (he is an antiquarian) while his escort (or two-thirds of it anyway) is taking on the Spanish. At first, the Spanish spearmen held them off rather well, but as wounds started to be inflicted they were forced back.

The figures are an eclectic mix of old Wargames Foundry, Redoubt Enterprises, and Outpost Border Reivers (masquerading as Spaniards, this time). The castle is in front of Sir T, who is ambling over to take a look while his escort fights for his life.

The crunch came when one of the escorts rolled double six against his opponent, who rolled a measly four. As the Frenchman was mounted, he got a plus two, while his opponent had already been recoiled and thus did not get any support from his nearby oppo. The difference was sufficient to kill the Spaniard. Meanwhile, the central spearman had been severely wounded while the one at the end picked up a light wound, and then another.

The Spanish were forced back into and beyond the stream, while Sir T started to have a poke around the chateau. You can see the French reserve to the left of the action; they are actually covering the ambassador as the Spanish captain had spotted him wandering around unescorted and made a move towards him. However, the wounding of his men meant that his services were required elsewhere – he is the blue-sleeved swordsman standing in the stream.

With only a few figures on the table – thirteen in total including the ambassador, this was a quick skirmish game. I had thought of using Flashing Blades but even a dozen figures is a bit much for a single player to deal with, especially when they start to pick up wounds. The rules were my own home-brew very quick solo skirmish rules, which is a post way of saying ‘scrawl on one side of A4’. As I have, um, repurposed them from Mr. Berry’s ‘Once Upon a Time in the West Country’ rules, from which the matched 2D6 mechanism was obtained, I think they work quite nicely. I had to mash up the ranges of course to get it to fit on my table.

Still a nice quick wargame fix, and it moves the Corbie campaign on a bit further. I seem to have decided to stick with the big figures for this one, it just seems to fit somehow and, sooner or later, there might be some desperate deeds of daring-do to be done. But, for now, the road to Calais is open. Perhaps I need to break out the new ADW ships again for a chase across the Channel.

‘I say, chaps, this is jolly interesting. This chateau must be ages old. Look at that tapestry.’

‘Monsieur, it is a sixteenth-century copy of a fourteenth-century Italian altarpiece. The chateau was destroyed by English troops before the Battle of Agincourt.’

‘Oh. Well, let’s let bygones be bygones, eh, chaps. Where are the other four, anyway?’

‘They are assisting the Spanish wounded, Monsieur.’

‘The Spanish have left a rather fine luncheon here. I say we should tuck in. We can save some for the others. Look at this wine. Fabulous!’

‘What is the wine, Guilliam?’

‘Local plonk, probably from the Calais cash-and-carry Arnaud. It’s only there for the English booze-cruisers, you know that.’