The Siege of Corbie

‘What is going on here?’

‘Sorry, sire. The wheel came off the gun.’

‘How did that happen?’

‘Can’t Don Sancho sort it out? He is an engineer; they’re supposed to be good at that sort of thing.’

‘I’m afraid Don Sancho is not with us, sire.’

‘Um. He said he had some unfinished business to attend to back in the last village sire. Something about laying his marshal’s baton in a convenient place.’

‘What?’ Don Pedro sighed. ‘He was getting a bit friendly with the bar maid in the alehouse last night, that was all.’

‘Perhaps we are back to the rutting, sire.’

‘Let us not go there, captain, if you don’t mind. This is a family-oriented blog, after all. Anyway, get the gun off the road and we’ll carry on. Not much else can go wrong, can it?’

There was a distant rumble.

‘What was that?’ There was a cloud of dust in the distance.

‘It would seem, sire, that part of the walls of the town have collapsed.’

I confess that when I first read about the year of Corbie and the putative Anglo-French treaty that was mooted around the same time, my first impulse was to drag out of storage my old 28 mm Redoubt musketeer figures and to Flashing Blades role play the moving of the signed treaty from Paris to London in the teeth of opposition by Spanish agents, French factions, and English pro-Hapsburg courtiers. It still might happen, I did run across the figures last week and did seriously consider having a look.

Flashing Blades, incidentally, is my all-time favourite role-playing game. I think I have mentioned it before on the blog, but a long time ago. It is, of course, set in the Seventeenth Century France that should have been, not the one that was, and was the only game which reduced the players to uncontrollable giggles. I fondly remember the swordfights on the roof of a galloping carriage and also the ultimate role-playing game question and answer:

‘Why is there a harpsichord at the top of the stairs?’

‘So you can push it down on people chasing you, of course.’

Anyway, on with the wargame campaign and to the siege of Corbie, which was the aim of Don Pedro and his merry men. The game was of the approach and siege of the town. Fortunately, Wikipaedia turned up a diagram of Corbie in the early 1630s. 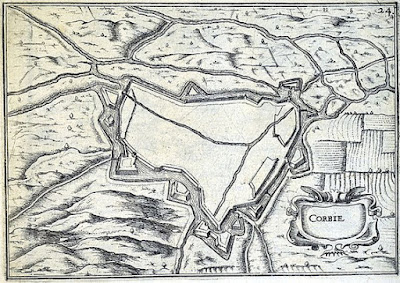 As you can see, it is pretty well done out with a trace italienne, which was my first question. The second question was how to represent it on the table, and the third was how to besiege it.

After due consideration, Don Pedro decided to approach from the bottom right of the picture above, where there was a blank bit of wall with a gate to the south and only a ravelin and a bastion sticking out.

The result is above. I know it does not look much like the above, but we do need some artistic licence with these sorts of thing (my artistic licence does have an endorsement, admittedly). The Wikipaedia article on the siege (in French) suggested that the town was undermanned, around 1500 defenders against 10000 Spanish.

A good number of moves in, the situation was like this: 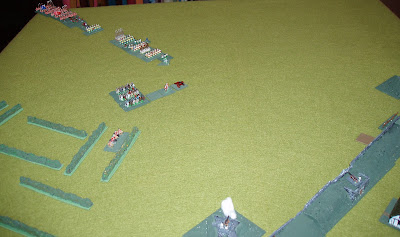 Don Pedro’s army is on the table and the gap in the line of march was caused by the collapse of the siege gun carriage, as noted in the introduction. To the right you can see the repaired damage to the wall of Corbie. This was all controlled by my card-driven siege rules, even though the formal siege had not opened. This threw up events, such as mining operations, which were discarded, and also events which had to be incorporated in the narrative, such as the loss of the gun, the loss of an engineer and the collapse of the walls. It all adds to the fun.

A few moves later and the French redoubt on the left blew up, through, presumably, a carelessly handled magazine, and then the forward-facing gun on the bastion was disabled. The whole idea of letting these cards stand was that the French were not expecting the invasion and the defences of Corbie would have been somewhat neglected.

At this point the French morale collapsed. Damage to the forward defences and the loss of two-thirds of their firepower was never going to encourage the heavily outnumbered defenders anyway, and this was compounded by some bad dice rolling. So far, so historical.

Siege wargames, like naval wargames, are a bit of a wargame primadonna. We all know they happened but mostly we do not play them, given, presumably, that they are boring. As recent rule sets of World War One have perhaps suggested, in fact what we need are decent, fast playing rules and a suitable level of abstract thinking as to what is going on on the table. Gun carriages did collapse, as did town walls with no good reason (except neglect). I am not saying that my rules are any good, but they are fast play and entertaining, and the action kept me occupied for a couple of mornings.

The troops are mainly Irregular except the Spanish cavalry and the red-coated Spanish infantry at the rear of Don Pedro’s column. These are Baccus, and the infantry are newly painted. This was their first sojourn onto the table. The defensive guns are by Langton, as are the crews, and the buildings are an eclectic mix of Irregular, Baccus and Leven. The walls too are a mix of Baccus and Irregular.

‘Yes. Now we will just have annoyed the French king a bit more than we had before.’

‘Maybe he will just see sense and re-open the road to Italy.’

‘I may be an optimist, captain, but I do live in the real world.’