From Marathon to Marathon

Clearly, your author is suffering from a problem with titles. I have never really managed titles very well. Polemos: SPQR was not my name for the rules; I think they were PM: Ancients until I noticed that they were for Romans. Even my latest project, some simplified ancients rules have the stunning title ‘Ancients Rules’. I confess that their naval companion, ‘Are you sure they should be black?’ is a little more original, but that arose while painting the fleets. The question is rhetorical; the answer is ‘yes’.

The reason for the title is, of course, the new rules, which are roughed out and, obviously need testing. Now naturally I am breaking most of my rule-writing rules here. Aside from a degree of self-plagiarism from both SPQR and the Age of Alexander rules, I am aiming for a set of rules which will be fairly comprehensive across both Greeks and Romans. I have had harsh things to say in the past about such rules, and so I suppose I will need to justify myself.

I think the justification is in the fact that the new rules have troop types such as ‘Persian Foot’ and ‘Hoplite’, not just some sort of ‘spearmen’ or ‘swordsmen like legionaries’. That may not, of course, last, but we shall have to see. The core mechanisms are recognisably Polemos, as filtered through my ‘Wars of the Counter-Reformation’ rules and SPQR, updated with some new ideas and with more of a concentration on game flow.

As I said, I need a playtest subject and, having just read a bit on Marathon, I went for that. I confess, it is a favourite battle and has been the subject of endless speculation. As Whatley argued many years ago, actually working out what happened at Marathon or any ancient battle is impossible:

Whatley, N. (1964). On the Possibility of Reconstructing Marathon and Other Ancient Battles. The Journal of Hellenic Studies, 84, 119-139.

Still, I did my research, and re-read the relevant bit of Herodotus, which admittedly did not take long (6.111-4, if you are interested). There are some points for confusion, however – the numbers and location of the Persian cavalry, the orientation of the armies with respect to the sea, Persian surprise at the lack of Athenian cavalry and light troops (archers), and so on. All of which adds to the speculation, of course.

One of the first wargame articles I ever read was by Charles Grant and about Marathon. A lot later I realised that he had simplified it rather, but he went for the deployment at right angles to the sea. He also added two units of Greek skirmishers and had two units of Persian horse deployed to their left rear, near the sea. I sort of followed suit. 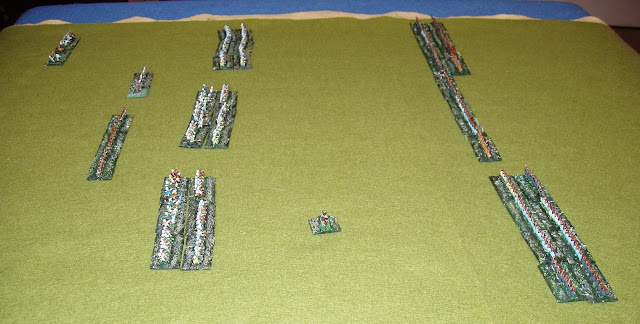 The Greeks consist of 20 hoplite bases, arranged with 4 bases in the centre and 8 each on the wings. I actually determined that they would all already have ‘advance’ orders under the rules, or they would never get going. The Athenians seem to have had a rather diffuse command structure, so perhaps I should have given each section a general. The Persians consist of 19 bases of Persian Infantry, 3 hoplite bases (Ionian Greeks) 1 light horse and 1 cavalry base. My idea for them was to stand off and blast the Greeks with archery fire, and bring the cavalry into action to hit the weaker Greek centre.

Herodotus says (possibly his most reliable statement of the whole narrative) ‘They fought in the battle at Marathon a long time’. It is usually a tough fight (Marathon is one of the battles I keep coming back to) and this was no exception. 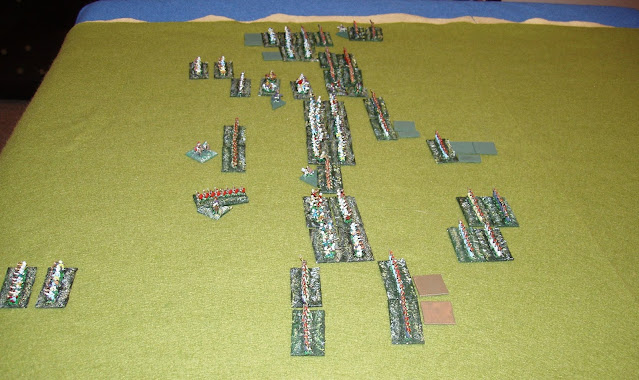 In the picture Persian archery has stalled the Greek centre and much of the left-wing. The extreme Greek left however has got into contact and routed their opposite numbers (seen fleeing, extreme left). On the Greek right the Persians are being pushed back and are starting to collapse, while the Persian cavalry is being ineffective and the Persian general is deploying the reserve Ionians to shore up the right.

It did not last much longer than that. The Persian left fled and with that the army collapsed. The Greeks were not without damage, however, as one of the centre bases also routed which, on a bad army morale roll, caused the Greeks to waver. 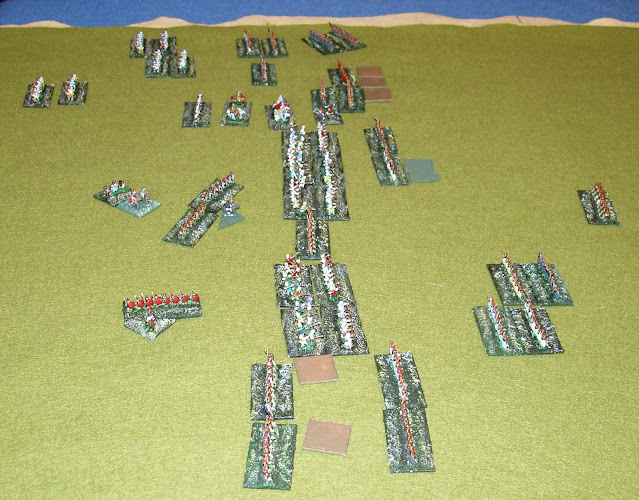 I think that the rules stood up reasonably well. Of course, I have a lot of notes to add, most significantly a turn sequence, which I kept forgetting, a few more combat modifiers and clarification to the pursuit rules. In real life, of course, the Greeks defeated the Persian wings and then turned on the centre, leading to confused fighting by the Persian ships and camp. The upshot above would probably be something similar, as the Greek left was rallying to turn on the rest of the Persian right-wing, and the Greek right could assault the Persian centre. The army morale rules at least saved me from fighting out the blood-bath.

The Persian cavalry was satisfyingly useless – there are arguments as to whether they should be there at all. Also, I suspect that the orientations of the armies with respect to the sea are fairly irrelevant, except insofar as to assume that the Persians were not so incompetent as to fight with their backs to it. The other thing about Marathon is that because it is a fairly short battle, it can be re-fought with variations, as Phil Sabin suggests. Evans’ suggestion that the Athenians had both light troops and cavalry might be one such experiment to try, although I doubt it would change a lot. Once the hoplites are in contact, the Persian foot does not have, on average, much of a chance. In the rules, the hoplites get 3, plus one for advancing and one for rear support, and a few overlaps, against the Persian Infantry 2 plus one for rear support. I have not even included here the effect of the Athenians advancing ‘at the double’; they do not seem to need to really. If the Greeks had had a few more tempo points, the centre could have closed as well.

Still, Marathon does provide endless interest. As I recall in Grant’s re-fight the Greeks won as well. In fact, I cannot recall a Marathon when the Persians have won. Sabin reckons that the key issue is the number of Persian infantry, and I confess that that would seem likely. I will have to try, but I think I would need to paint more Persians first.