How (Not) to Take Over the World

Those of you with long memories might recall my escapades in rebasing Aztecs, and the vast quantity thereof I seem to have. Plans are afoot for reducing the number of bases, incidentally, but meanwhile, what of my plans to become the new Emperor of the known world, in this case, Mexico before the Spanish arrived.

Anyway, following my starting of a campaign to become Emperor of Mexico, you might recall that I started with a success against some Chichimec raiders. I admit that they are not exactly a dangerous foe but in DBA they are a bit tricky, as actually destroying any skirmishers is a bit of a task. They tend, after all, to run away rather than stand up and be destroyed like proper soldiers.

One of the key quantities in the campaign is the ruler’s personal rating. The higher the better, of course. The higher your rating, the more likely cities are to surrender to you without a fight, for example. Plus, you are less likely to be assassinated by disgruntled nobles. Your rating starts at 7 and is increased by one for each battle won, decreased by two for each battle lost, but increased by one for each city conquered or surrendered. On the other hand, you lose one if you withdraw from a battle without fighting.

As a consequence of my victory against the Chichimec raiders, my rating became 8, so then, in the second part of the first turn I moved on Tlacopan, albeit with a DBA army of 11 bases, having lost an auxiliary base (that is, Aztec warriors) against the raiders. A bit of dice rolling and card drawing indicated that the residents of Tlacopan were not impressed by my imperial credentials (at least, not yet) and defied me, calling in their allies to face me with eighteen bases (excluding any hidden in ambush). Granted the allies were all skirmishers, but eighteen against eleven did not seem great odds to me, even so.

After some time pondering the odds (the last battle, you might have noted, was fought in October 2019) I decided to take the hit to my personal rating and withdraw. My personal rating dropped back to 7. That was the end of turn one of the campaign, so I regained the missing base of my army to be at full strength for the next turn.

This time there was no random event, so it became my move immediately. I decided to attack Tlateloco. The residents drew a three on their resistance card, from which my rating was subtracted and another card (a ten, in this case) was added to their resistance total. Thus I had to roll more than six on a D20 for them to surrender without violence. No problem, I thought, and rolled – a six, of course.

So, I thought, these people wish to defy me. Very well, battle will be joined. Drawing up their army they had the normal DBA Mexica array of 3 blades (suit wearers), six auxilia (warriors), and three psiloi (skirmishers), plus an extra ally, of another three skirmishers. No problem with that, I was confident in my newly reinforced and up to strength army. 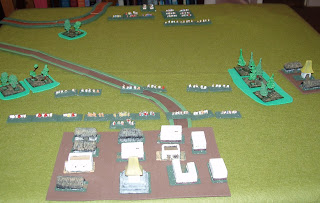 For reasons I’m not entirely sure about the pictures are not brilliant (they never are with me at the helm, I know, but these seem to me to be worse than usual), but anyway, above are the initial dispositions. In the distance, you can see my brave lads, ready to roll over the foe. I have to say that the campaign game does give some real use for skirmishers, as in this case, the terrain features may contain ambushes if they are in the enemies half of the table. Thus I can use my skirmishers to ‘spring’ and ambushes before the main body arrives.

In the campaign I have ten moves in which to win the battle. I managed to lose it in six. The picture above shows the end of the game. Conspicuous by my absence, you will note that the Aztec general’s base is missing, along with two bases of suit wearers. In DBA terms this means that I have lost. What, you might ask, went wrong?

We await the results of the full public inquiry into the battle, of course, as well as the Royal Commission. However, a few facts are clear. Firstly, there were no ambushes, so they cannot be used as an excuse. The advance of my army was a bit disrupted by pesky skirmishers so my warriors never really got into full combat. However, it was the other flank that turned into a disaster where my suit-wearers got flanked by the enemy and I lost two bases, the second one including the general.

I then had to roll for the fate of the said general, my good self in this case. Fortunately, I rolled low and my flesh, at least, was preserved intact. My reputation as a general, however, took a bit of a pounding and my rating fell to five. Ho, as they say, hum.

I now have to take turn three with an army lacking a suit wearer base, which might make things a bit tricky if I have to fight again. I have to confess that I was probably over-confident in my assault on Tlateloco, especially when no ambushes were discovered. It was a bit ‘hey diddle diddle, straight up the middle’ but my defense is that with the terrain lay out, I did not have much choice.

Still, upwards and onwards as they say. I have to confess that there is a certain satisfaction in designing a campaign system that can beat me in battle. Actually, the last time around, I not only lost in battle but I also eventually lost my life to an ambush. It was a bit like things could happen in real life I suppose, I was desperately trying to shore up my position by winning a battle to restore my reputation when some idiot bashed me on the head with a wooden sword. I hope to do better this time.