‘The must have been very painful for you to say.’

Vodkaschnapps shrugged. ‘It is war, my friend. We have beaten the Romans in open battle, but now they are hiding like moles, and I need your help to dig them out.’

‘We could, but the Romans are tricky, we know that. They still have some cavalry who might try to interfere.’

‘So what are you suggesting?’

‘We will keep the Romans away and you storm the fort.’

‘So I get the difficult bit?’

‘I cannot do it. My men are not comfortable on the ground. You do it and keep the loot.’

‘Do I have a choice this time?’

‘Join us against the invaders.’

‘The invaders are also Sarmatians, of my race, my kin. Their leader is my kin. I cannot join with their enemy, Roman’

A coin clinked on the table, then another.

‘Your kin, your brother?’ Another coin, then another.

‘Well, more a sort of cousin, really. It is just a figure of speech we have.’

‘Then you’ll aid us against them?’

Three more coins landed on the table. ‘Can we turn your maybe into a yes, if this is your advance half?’

‘I will meet you on the field with my men, my friend.’

G. Inan Tonicus has resorted to bribery to raise some heavy cavalry against the Sarmatian invaders. It seems to him to be the only way he can face them on the field. After the last defeat (see the link on the right under ‘Sarmatian Nation’) the infantry have taken refuge in a marching fort while Tonicus has gone for reinforcements.

Vodkaschnapps has not been idle either. After finding the Romans in the fort, he has recruited the previously defeated Dacians to assault it while, as noted above, using his men to hold off the relieving forces.

This was one of my largest games to date, with four twenty base armies on the field: Roman, Dacian and two Sarmatian armies, on opposite sides. From this you may deduce that I have recently finished doubling the Sarmatians, and quite pleased with myself I am, even though I did nearly give up. Painting endless cataphracts seemed a mountain to climb, but I got there in the end.

Similarly, the Sarmatians the Romans have recruited will waver if the fort is penetrated and change sides if it falls. In this case ‘falls’ means the Dacians coming out the other side. 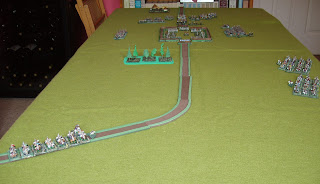 The picture shows the game a few moves in. To the left are the relieving Roman cavalry, on the Roman road. To the right are the mercenary Sarmatians. To the left and right of the marching fort are the barbarian Sarmatians, and beyond the fort are the Dacians, who are just about in position to assault the near gate. The figures are Baccus, the trees and fort are Irregular and the village in the distance I think is Timecast.

The assault on the fort was one of critical timing. 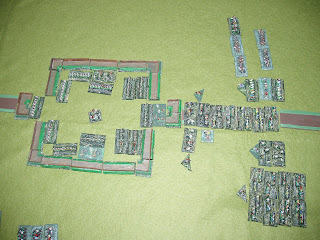 A few turns later the situation in the fort was critical for the Romans. Furthermore, the mercenary Sarmatians had ceased offensive operations. 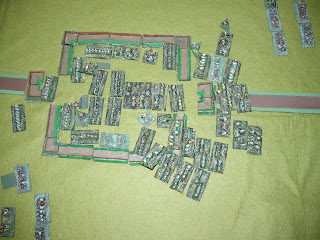 The initial assault has driven deep into the fort, and the second assault is also over the walls. From here it went from bad to worse for the Romans, although they very nearly managed to stabilise the situation, albeit with some very shaken cohorts.  The secondary assault, however, made it to the other side of the fort and waved to their Sarmatian friends, causing the mercenary Sarmatians to change sides. At this point, I stopped the game as Roman morale had sunk to zero. The only remaining interest is whether Tonicus and his cavalry will get away.

The picture shows the final positions. The Dacians have blasted their way through the fort. The Roman cavalry has deployed against the flanking barbarian Sarmatians, but now the mercenaries to their rear have changed sides. The infantry in the fort has mainly evaporated. 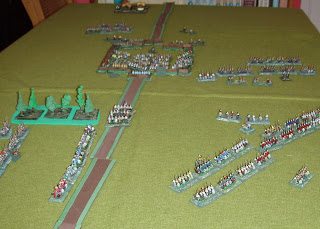 The action did not go as I was expecting. A lot depended on who won the tempo at the initial storming of the marching fort. On the other hand, the Roman tempo points rolling was not good during the game, and nor were their combat dice. It was a fun battle, however, and the sight of Dacian hordes swarming over the palisade is one that will live with me for a while.

‘After that I think I can forgive you for resisting me.’

‘That is good of you; we just won you the battle!’

‘OK, allies. But the Romans will still kill us. Anyway, what about your brother?’

‘Here.’ Vodkaschnapps placed a jangling bag on the table. ‘This is his half of the Roman money he took to joining them.’

‘What happens now? The Romans will come again.’

‘We have to decide, my friend. Do we pitch our tents here and await them, or go on to attack the main base hereabouts and try to get rid of them permanently.’