The Action at Mount Grace

‘Sir, there is a message from Don Carlos.’

‘Excellent. Show the messenger in.’

The man entered the hostelry. ‘Well?’

‘Don Carlos wishes you to know, sir, that his light horse will start moving at dawn. They will meet your men at the bridge.’

*
I have been tinkering a bit with the pages of the blog, and so you can catch up with the story of the Armada abbeys campaign so far from the link to the right. Don Pedro, you will recall (at least, having read the summary) is in Stokesley, Don Carlos in Northallerton. The Scots, having crossed the River Tees, are now based in Yarm, while the English have advanced from York to Thirsk.

The near-crossroads at Mount Grace Priory is, therefore, crucial (pun intended). The road from Stokesley (the modern A172) crosses the modern A19 (a dual carriageway but, apparently, on the same line as the old road) and then the A684 goes off to Northallerton. By my reckoning, there is around a mile from the first to the last-mentioned turns.

This is my realisation of the terrain. 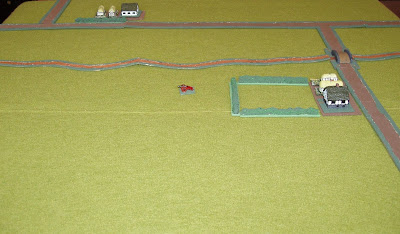 The road from Yarm comes in from the top left, hence from the north and the Scots. The road next to it is from Stokesley and hence Don Pedro’s Spanish arrive from that direction. The road to the far right is the one from Thirsk, along which the English advance, leaving the road nearest the camera to Don Carlos’ troops. To the left is the manor farm of Mount Grace Priory, which is up the wooded hills just off the top of the picture. The hamlet nearest the camera, with the field, is Ellerbeck, and the Eller beck flows under the bridge.

Somewhere in Don Featherstone’s Solo Wargaming there is a piece about the clashes of cavalry scouts. He observes that a face to face wargamer would just roll a dice to see who out-scouted whom, while a solo wargamer can set up the action, use lots of figures even if they were not all the correct ones for the period, and generally enjoy an all cavalry affair. So I decided to try it out.

As you might know by now, both the Spanish and the English and Scots have light cavalry. The Spanish are mounted arquebusiers, the Anglo-Scots are, of course, Borderers. A quick count of my resources showed that I have eleven of the former, something like nine Irregular English light horse and three Baccus Scottish lights. As I mentioned a while ago, this action was delayed while three extra Scottish bases were painted.

My fevered imagination ran something thus:

‘I dunno, Jimmy. I think they are newly painted recruits.’

‘We’re going to lose this one, you know, Jock.’

Anyway, the first troops on the table were Don Carlos’ Spanish (plus a jinite, to make up the numbers). They aimed to cross the bridge before anyone else arrived, and they very nearly made it. 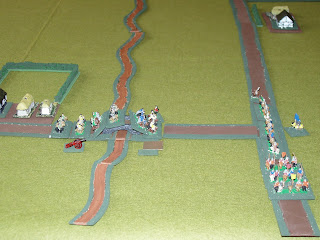 The Spanish are just crossing the Eller beck and the English have just arrived and managed to deploy their first rank in skirmish order. As you can see from the markers, the Spanish are disordered by the crossing and have just been recoiled by some effective English skirmishing.

Things got worse for Don Carlos’ men as their front rank base was subsequently routed by alarmingly efficient English activity. The Spanish withdrew and deployed along the line of the stream, and the flank was reduced to a nervous waiting game.

The Scots and Don Pedro’s Spanish arrived on the same move and both sides had reserved sufficient tempo points to permit them to deploy. This led to a further exchange of skirmishing and the Spanish came off worse. However, they sent their second line south behind the Manor Farm forcing the Scots to counter with movement of their own second line. Meanwhile, in the south, the Spanish from Northallerton advanced to the stream and skirmished across, in the hope of disrupting to English sufficiently to let their comrades from the north make a decisive move.

Alas, it was not to be. The Spanish on the stream came under withering attack from the English second line (carefully moved forward just as the first line was wilting) and lost two, and then another, base. In the north, the Spanish first line from Stokesley suffered the same fate. Spanish morale sank and their flying column (such as it was) stalled. The Spanish lost another base to Scottish skirmishing and the Spanish morale sank to ‘withdraw’, so that is what they did. Extricating the light horse by the Manor Farm might have proved tricky, given the slope and woods off the table on that side, but not impossible and the Scots let them go.

The result of the combat is, of course, that the crossroads and bridge are firmly in Anglo-Scottish hands, and the Spanish are now split. I suppose something dramatic is likely to be required by Don Pedro to rectify the situation, but I need to consider exactly what.

‘The English have the bridge?’

‘And they have the crossroads?’

‘Do you say anything aside from ‘yes, sir’?’

‘Carlos! How on earth did you get here?’

Carlos indicated his boots. ‘I came the muddy way, over the hills. It was fine for a few, but no path to move troops.’

‘Thank you. I take it you have heard the news?’

‘I have. What are we to do? What are the English doing now?’

‘Well, from the top, they seem to be building a fort by the bridge.’

‘These Protestants do a lot of digging.’

‘It is our only route south, of course. With a decent fortification they could seriously damage our plans to get to York for the autumn.’

‘Yes, the Christmas market may well be over by the time we arrive.’