‘They are over there?’

‘Yes, sir. They are across the river, on the other side of that hill.’

‘Are they definitely rebelling against the king?’

‘Yes, sir. They say that the king’s father returned the kingdom to their leader’s father, and therefore they own no allegiance to the new king.’

‘So they will fight? We are representatives of King Alexander IV.’

‘Yet the king is at the other end of the world, has been defeated in battle and may, in fact, be deceased.’

‘I believe that to be the case, sir.’

‘We must fight these rebels in the name of the king.’

‘But if the king is deceased, sir, or, um, unavoidably detained at the other end of the world?’

‘Then we shall have to see. Order the advance.’

This is, in fact, the next battle in the Alexander IV campaign. I decided to do something different. With Alexander, after his defeat in North Africa, partying in Ibiza, some bits of his father’s empire are a little restive. Not that Alexander III really conquered them to any great extent, it has to be admitted. He just seems to have liked battles and victories. Anyway, the next bash is some rebellious Indians against a possibly loyal early successor army, from the Asiatic provinces.

This was a bit alarmingly like a ‘line ‘em up and kill them’ sort of battle, but there is a little more context than that. Anyway, the rather dark photograph shows the Indians to the left and the Macedonians to the right. With all the bravado you would expect from the Macedonian officers at this time, they have crossed the river on their baseline, occupying the steep hill with their light troops. This has had the effect of splitting the phalanx, however, which might not be a good thing.

The Indians have large quantities of archers, some elephants (including the general) and some cavalry. The archers furthest from the camera are on a hill. The numerate and sharp-eyed among you will notice that I have cut the number of bases to 12 for this one, for reasons of time. I expected a fairly slow battle as the Indians attempted to shoot up the Macedonians, and the Macedonians attempted to turn the Indian flanks.

The critical point of the game is below. At least, I think it was critical.

The Macedonian ‘Companion’ cavalry on their right have turned across the supporting flank, firstly to avoid charging up a hill against massed archery (which seemed like a good idea) and secondly to attempt to charge the Indian cavalry, which is a bit more sedentary and was thus, expected to be a decent target. Unfortunately, the Companions turned into bow range of the archers on the hill and lost their orders and the Indian cavalry advanced on them (not charging) and (on a slightly fluky dice roll, admittedly) routed them. There went the main Macedonian strike force.

The consequence of this was that the Indians could control the battle. The Macedonians tried to assert control of the centre by sending their light troops down the hill, but these got severely stomped by the elephants, while the phalanxes were stalled and disrupted by the archers. The end game was thus: 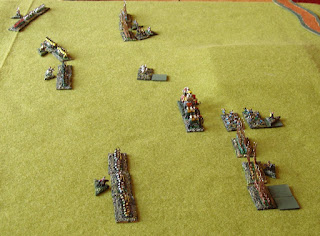 You can see here that the Macedonian light troops have pretty well evaporated, while the phalanxes are in pieces, that is, operating as single bases rather than groups. This makes them much, much harder to do anything with. At this point, being five bases down and shot to bits (the nearest phalanx base is probably not much longer for the battle), the Macedonians conceded.

What could I have done differently? Well, the terrain was against the Macedonian side, the steep hill split their forces. I should probably have ignored it and deployed on one side or the other, with the phalangites in one block covered by the skirmishers. The hill could have been held quite adequately by the peltasts. Committing the Companions early, and losing them, was also a problem.

On the other hand it was quite clear that I, as Indian commander, was quite concerned about engaging anything at all with my bowmen except at extreme range. Thus I had to rely on lucky dice rolls and the elephants. The cavalry I was not too sure about; they look nice but felt not that effective. I am still unsure about how the Indian army really functioned. I shall have to go back to Arrian, I suppose.

As a wargame it was interesting enough, although I did feel that the elephants needed souping up a bit. The Indian plan worked, to stand off and shoot, but with eight out of twelve bases archers what else could they do, really? As the opener for a campaign, of course, it went well.

‘Really? Show him in. Translator!’

The translator materialised, and there was a lengthy exchange.

‘Sir, he says that he is willing to establish the river as the border between you and him.’

‘He says that if you agree, the king will give you the hand of his daughter, his only child, two thousand archers, whose effectiveness you saw this day, fifty elephants, and as much land west of the river as you can win and hold.’

‘Spear won land, sir. It will be yours by conquest.’

‘Hm. An interesting offer, by Zeus.’

‘Further, he says that when your union with the princess is blessed by children, they shall be heirs to his land too. The king will go east, and you will go west. Between you, you will fulfil the ambition of your late liege lord, King Alexander, to conquer the known world and beyond.’

‘That was certainly his ambition, yes. And his son seems not to be making the most of his opportunities to further King Alexander’s aims.’

The envoy bowed as this was translated. ‘He says that you and the king are in accord. His troops and the princess will be with you here in a week. Farewell.’