The Banks of the Iffy River

As the mists cleared, Donal cleared his throat and adjusted his cloak. About two hundred yards away he could see his cousin, Dougal, standing with shadowy figures behind him. Either that or it was a rather good Dougal-like statue, and Dougal had always been followed by dodgy people. Amplified by the drizzle, he could hear the coughs of his Galloglaich, and the occasional rattle of their chain mail as they adjusted their positions in the damp.

Dougal was moving towards him. A final parley before the carnage started. Donal gripped his sword hilt a little tighter. You never could tell. Would Dougal apologise for the insult to his aunt, Donal’s mother?

‘Morning, Dougal. It looks like being a fine day.’

‘To be sure, but, we have an honour to defend.’

‘Donal, I assure you that I never insulted your mother.’

‘Dougal, you said she was a cow with one horn, which I take to mean half a devil.’

‘No, Donal. I said she has a cow with one horn. It isn’t quite the same thing.’

Dougal smiled a tight, thin, untrustworthy smile. ‘Of course, I am, Donal. Why would I want to call my aunt half a devil? Why not go the whole hog and call her a full devil?’

‘Would you call her that, Dougal?’

Dougal considered. ‘I might, if the circumstances warranted it.’

‘What circumstances would they be then, Dougal?’

‘Well, I’m not sure. But refusing to agree over Iffyahame would be one option, I suppose. It was given to my mother by Grannie.’

‘No, Dougal, it was given by Grannie to my mother for her lifetime.’

The sun came out. ‘Then I suppose your mother is a devil, and you are the son of one, Donal.’

There was a shout from behind and the sound of running feet. ‘Lord Donal, Lord Dougal, what is that?’

Started, they both looked around. Silently a ship had sailed into the bay. Now the clearing mist showed boats putting off from it to the shore. Donal looked at Dougal, who seemed transfixed by the naval activity. ‘Any ideas?’

Dougal flexed his fingers on his axe. ‘Nope. Nothing to do with me.’ He squinted a bit. Dougal’s eyesight had never been that good. ‘A golden flag, I think. Spanish?’

‘I heard there was a Spanish fleet about England. But they’d gone.’

‘Not far, obviously.’ Dougal shrugged. ‘We can’t let them get in the way of serious business. Iffyahame belongs to my mother, your aunt, not to your mother, the horned devil.’

‘You’ve done it now, Dougal. Take that back!’

‘The only back I’ll see is yours as you run away, Donal, when I stab you in it.’

‘What about that lot?’ Donal jerked his thumb in the direction of the bay.

‘I’ll deal with them later, after I’ve won Iffyahame.’

‘That’ll be never, then.’ Donal turned and stomped back to his lines.

‘Are we fighting, Lord Donal? There are more of them than us.’

‘Yes, we are. But send Father Brian to the beach to invite our guests to join us.’

After two years of effort, I am now the proud possessor of a sixteenth-century Irish army. Well, I mean nearly two years of them sitting as a ‘grey army’ in my pending painting box, and about six weeks of actually being slowly painted. You know how it is.

Having thus finished, I, of course, wanted a battle. Now, you might have been following my Abbeys Armada campaign. Indeed, the Irish were originally purchased to give options for that activity and I originally set the battle to be that of an English expeditionary force set to Limerick to quell an Irish uprising sparked by the arrival of an armada ship. I even got so far as setting the forces out and showing the Estimable Mrs P the table.

Something about it bothered me, however, and it took a day to track it down. So while the Estimable Mrs P was banging on the door of my wargames hovel I was here, in my study hovel, typing the above backstory. Drivel it might be, but it does provide a better motivation for an engagement than I had before and even contained some interest and a few laboured jokes. But not, I trust, any racial stereotypes.

The River Iffy flows across the board, joining the sea somewhere just off the table. Iffyahame Manor is closest to the camera. Whichever Irish side holds the manor at the end of the game wins. Donal’s forces are to the left, while Dougal’s are to the right. Dougal has a one base advantage over his cousin, but Donal is despatching Father Brian to the seashore to recruit the Spanish when they land. You can just see their rowing boats at the top of the picture. The woods are totally gratuitous; I usually forget to place any trees, so I thought I would show off that I had some. The soldiers are Irregular, as are the trees. Iffyahame Manor is Leven.

The fight was quite lengthy. Donal’s tactics were to stay on the defensive behind the Iffy and await the arrival of the Spanish. Dougal’s plan was to attack while he had the material advantage. The Spanish were delayed by a long time, and Donal’s men had just about staved off the attack when they intervened on his left routing a base of kerns that brought Dougal’s army to ‘fall back’ status. Not wishing to increase the family feud, Donal declined to pursue.

As it happens, the River Iffy lived up to its name, the famous Polemos Crocodile Infested Streams caused several of Dougal's attacks to falter. Donal couldn't throw a six to land the Spanish, but Dougal managed several times to fail to cross the Iffy. 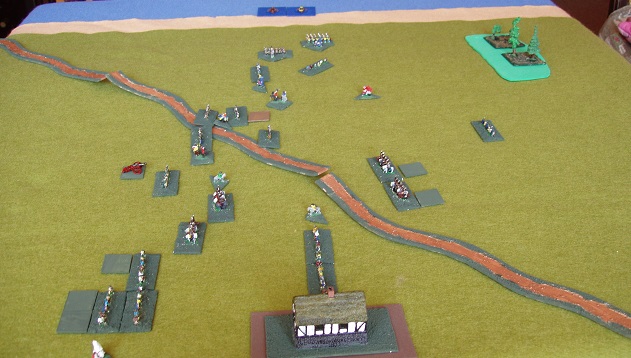 Donal’s right flank, the one nearest the manor, had been largely a skirmish fest with honours about even and a distinct lack of much interest from the commanders. Dougal’s centre had attacked in two waves and lost both times, being disrupted by failures to cross the stream (obviously the banks of the Iffy are iffy). The belated arrival of the Spanish on the far side prevented Donal’s men being outflanked. If you look really closely you can see Father Brian looking rather pleased with himself leading the sword and buckler men of the landing party. He had occupied himself making sand castles while waiting.

‘So, what do you say about my mother now, Dougal of the losers?’

‘I’ll look forward to her roast chicken dinner in her new manor of Iffyahame.’

Donal glanced at his visitors, who were sitting stiffly at the bench. ‘Are they all right, Father?’

Father Brian shot a rapid line of Latin at the Spaniards. Haltingly they replied and the priest translated. ‘They are wondering if you are trying to poison them.’

‘That is our best stout!’

‘What do they want, anyway?’ Dougal asked.

There was a lengthy Latin exchange. ‘They want to land an army here and, with your men and assistance, march on Dublin, take the city, seize any ships there, sail to England and invade it, capture London, dethrone Elizabeth and return the country to fealty to the King of Spain and the one true church.’

Dougal pulled some parchment from his pocket and flicked through it. ‘Well, I’m free until next Tuesday.’