Disaster in the Desert

‘Where is my historian?’ Alexander demanded.

The crowd of officers parted, and the scribe cowered before him. ‘Have you recorded today’s events accurately?’

‘But honesty, your majesty.’

‘If you want to discuss ethics, you’ll need to go back to Athens.’ The man nodded. ‘It is that way; you had better start walking, and you can tell the Moors who capture you that it was because you were an honest man.’

Alexander turned away. A staff officer cleared his throat.

‘Um, well, sire. We do not seem to be in the port and able to embark on the fleet as planned, and I was wondering what you wish us to do about it?’

‘Wait until the infantry return and then we’ll break out. Probably at night.’

‘Um. Regrettably, sire, I am not sure that many of the infantry will be returning.’

‘Um, the bulk of them seem to have surrendered, sire.’

‘Well, sire, once you, um, left the field, obviously thinking all was won, I'm afraid that they seem to have rather lost the will to continue and, have, well, as I said, surrendered.’

This was probably the most thorough test of the Polemos: Age of Alexander skirmish rules that I have ever undertaken. Alexander, having marched through bits of North Africa after his success at Carthage, had to fight his way to the coast to reunite his army with his fleet. In his way was a horde of Moors, backed up by a few Spanish.

The picture shows the initial dispositions. 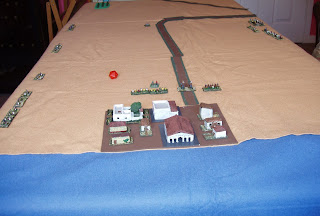 The Moors are on the table. Two Spanish tribal foot bases and a heavy cavalry base, plus the Moorish elephant and general are in front of the port. The rest were distributed randomly down the sides – ten light cavalry and ten skirmisher foot. The Macedonians arrive in the top right-hand corner, with the objective of the port. Soldiers are Baccus, buildings are a mix of Irregular, Leven and, I think, Timecast.

I confess, when I looked at the set up I thought it would be a walk-over for Alexander IV. So, apparently, did he. His plan was to use the Companions and light cavalry to sweep the opposition away, while the infantry crossed the stream and ambled along the road to the embarkation point.

As I dare say you noticed from the initial discussion between Alexander and his officers, it all went a bit pear-shaped. Alexander and the cavalry went off on an offensive down the right (on the left of the photograph) and got bogged down with the Moorish lights. The infantry struggled across the stream and bogged down against Moorish light horse, having no real reply, certainly after the peltasts were hard hit. Unusually for me, I have a photograph of the middle of the battle, showing the Macedonian pikes in trouble. 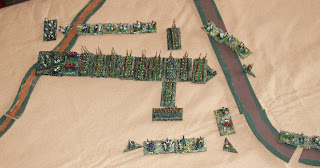 The peltasts to the top left are routed, the head and left of the column are surrounded, and Alexander is on the other side of the battlefield.

Fortunately for the Macedonians, lunch intervened, and I decided that young Alex would attempt to return to help the infantry out. Unfortunately, the withdrawal of the Macedonian cavalry in the face of hostile skirmishing was a bit of a disaster, and led to the collapse of Alexander’s army. 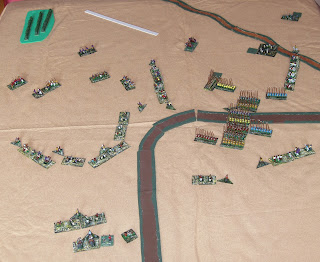 The Macedonians were not quite routed as an army, but bereft of cavalry the phalanx was unlikely to hold out much longer, so I decided that, experienced troops as the phalangites were by this stage, that they could probably negotiate a surrender.

So, a decisive win for the almost entirely light force. I did make a few adjustments to the rules, allowing skirmishing light horse to move two base depths towards or away from an enemy rather than the official one. This seemed to model the light horse dance away from their heavier brethren more realisticly, rather than the lights having to turn around, move away and then turn back. Maybe it did unbalance the heavy versus light confrontation a bit, although if Alexander had stuck with the cavalry nearer the infantry things would probably have gone better.

So, what is next? How does Alexander get out of this one?

‘His Highness the King of Esbain has graciously permitted you to remove yourself from his kingdom with no further interference if you leave your baggage and weapons here in the camp and go with all your men.’

‘That is preposterous. I cannot permit that….’

‘In that case, your majesty, he told me to tell you that you and all your men will die here. He is willing to loan you a rowing boat so you can send a message to your fleet to come and collect your men, and yourself. Otherwise, this camp will be besieged until hunger, thirst and the desert bring you to your senses, or you die.’

‘Your majesty, his most serene highness asked me to tell you that you can only return if you claim but one javelin’s length of land, or as much more as you are taller than one.’

‘Yes, your majesty. We have but  two amphorae of water left for the men and the horses.’

‘Very well. Send the rowing boat. Let us get out of here….’

‘As your majesty wishes.’