‘Thank you Colonel. Yes, it is I believe a good vintage. To be sipped, not swigged.’ Amnesia frowned at some of his fellow officers.

‘I think they are only swigging the beer, and possibly the vodka.’

‘Swigging vodka sounds like a disgusting idea, Colonel, particularly from the vantage point of tomorrow.’

Cranium shrugged. ‘They are off duty, Amnesia, and will make their choices.’ He sniffed the glass again; part of the enjoyment, after all, was in anticipation.

‘Amnesia, why did you join up?’

‘Trouble with a woman?’

‘Caught them napping Colonel. Migraine’s scepticism was ill-founded. My lads did not fire a shot, or even get their pikes down from port; remarkable. We went through them like a hot knife through butter. Or,’ Amnesia glanced again at his fellow officers, ‘a mixture of beer and vodka through a mercenary officer.’

‘Be fair, Amnesia. In the officer, it will come out the way it went in. We, at least, went straight through.’

Amnesia grinned again and swirled the wine in his glass. ‘Do you think they will try to take revenge, Colonel?’

‘I imagine so after they get themselves sorted out again. That might take a while, however, as they seemed to be running in all directions. I suppose we had better double the guards on the gates, though, just in case.’

I finally got around to ‘fighting’ the breakout scenario proposed I cannot remember how long ago. Anyway, as I am sure you recall, the convoy to Tsarputinsberg had been captured by the besieging Polish army, and Cranium and his colleagues had decided to launch a night attack on the Polish camp to regain their supplies, in particular, their Christmas booze.

There were a number of delays in playing the scenario. Firstly I needed to paint and base a number of barrels and crates to be the targets. Secondly, some other battles were fought out before this one, and thirdly life intervened a bit. Still, eventually, the tables were set and the initial set up looked like this: 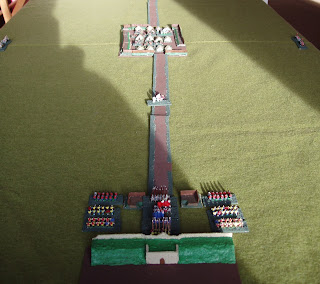 The early morning sun (actually, it was late afternoon winter sun, but I am allowing myself some poetic licence) reveals the walls of Tsarputinsberg nearest the camera, with the mercenary companies drawn up ready to assault the Polish camp. The cavalry to left and right are two squadrons of Russian horse and two of mercenary, who are not really on the table but arrive after a time to be decided by dice roll. At the far end of the table, out of shot, the 12 base Polish army was set up in tent order (three rows of four tents), quietly slumbering. 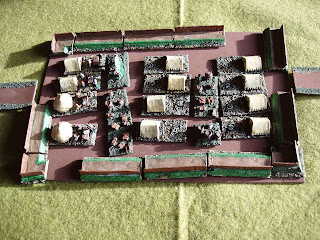 This is a closer view of the Polish camp, which is based around (if you were wondering) the Irregular Miniatures Roman Marching Camp, which is, I find, a very useful item for Renaissance wargames. I think the tents are Irregular, too, the figures with the tents on the left are Baccus, as are the fireplaces. The target barrels and crates are by Perfect Six and the Polish command stand is, again, Irregular. I could have filled the gaps up with tabor waggons, but for reasons best known to myself, I did not, probably because I forgot.

In the interests of balance, the mercenaries are below. 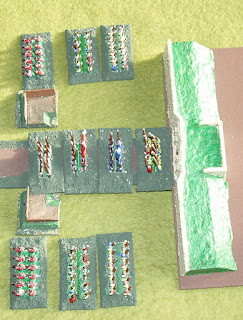 The figures, here again, are Irregular with a very, very old Baccus city wall (now out of production – shame, I could do with some corners). The two fore companies of shot are not part of the surprise attack; you will recall that Cranium deployed them to shoot the raiding party home. They are under orders not to sally forth.

The end game situation is as below. 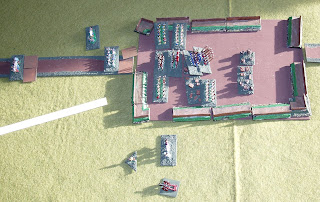 The remnants of the Polish army are fleeing to the left of the picture. Cranium himself is nearest the camera and the mercenaries have ploughed through the camp, capturing the tents and routing the Poles without any resistance. They even captured the booze and declined to start drinking it immediately. In short, it was a walkover.

The Polish catastrophe was, of course, engineered by dice throwing. The mercenaries contrived to arrive under the walls of the camp undetected. Cranium thereafter got the tempo and never relinquished it. The Polish dice throwing was appalling and they never stood a chance. Indeed, as Amnesia mentioned above, there were no actual combat rolls involved; once the mercenaries made contact with a tent with un-woken and unrallied troops in it, those troops had no choice but to rout.

Of course, given that the game only took about fifteen minutes, I could have reset it and had another go. Indeed, in a face to face game, or a one-off game, I probably would have done so. But this is part of a campaign, albeit a narrative campaign, and one of the resolutions I have made about such is that what happens on the table happened. I think this is particularly important when, as I am, you are trying to develop some rules as well. If I kept re-running the battles every time I tweaked the rules, the campaigns would have got very bogged down and I would probably have given up in frustration.

As it is, I now have to exert my brain cell with respect to the Pole’s next move. Are they going to be sufficiently annoyed to assault the walls or so disgusted that they pack up and go home, aiming to recruit Cranium and his band for next year’s campaign? There is also the question of what the local Ottomans might be up to, plus the possibility of Cossacks or Tartars intervening too. I have rebased this lot as well and it would be a shame not to get them onto the table at some point soon.