One of the problems with a rebasing project such as the one running at the moment is that the output of armies can outstrip my ability to play wargames. I suppose I am just that sort of person, a ‘completer’ in psychological terms. I have set my project end, which is to have rebased all my renaissance soldiers to current standards, and the project dominates my hobby time. Despite the estimable Mrs P reminding me that it is only a hobby and, in some senses, it does not matter. I agree entirely; I just cannot stop.

Still, I did manage a rebasing hiatus to put the Mughals on the table. I have no nice narrative for this; it was vaguely conceptualized as a Rajput rebellion against the local Mughal forces. The armies were put together based on what I have and on the DBR army lists, of which more is to be said later, probably.

The opening dispositions were as follows: 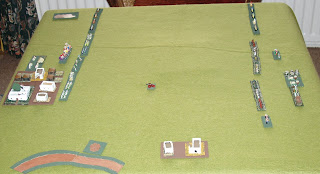 The Mughals are to the left, musketeers nearest the camera, followed by a base of rockets, infantry, archers and heavy cavalry on the far side, with the general and another elephant base as the reserve. The Rajputs are to the right, with a base of light cavalry, a block of archers, another block of archers and their lancer armed cavalry on the far side. The only reserve is the general’s cavalry base. The figures are a mix of Irregular colonial Indians and Baccus classical Indians. The buildings too are a mix of manufacturers, Irregular, Leven and I have forgotten what else.

Now the battle was close fought and I had to make up a fair few rules as I went along (which was part of the point). According to my reading elephants are not keen on gunpowder weapons, but that was not an issue here because the Rajputs did not have any. The rockets had to throw a six to hit anything and failed dismally. I really am not sure whether that was harsh or not.

Most of the action was on the Rajput right, where their heavy cavalry made a bit of a mess of the Mughals, but not a total one and the semi-victorious lancers were charged by the Mughal reserve elephants, partially successfully. The centre and Rajput right were confined to a long-range exchange of arrows and gunpowder, to everyone’s detriment.

The successful Rajput lancers returned and overran some Mughal archers on the central hillock while the Mughal elephants threatened the right of the Rajput centre. The lancers then charged the elephant in flank and routed it (it being the Mughal general), carried on and routed the accompanying Mughal cavalry and at that point the Mughal army broke. 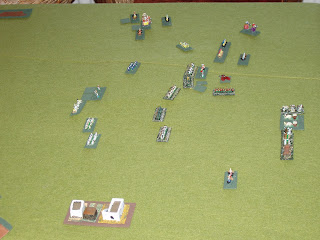 In the picture, the Mughal general can be seen routing at top right, the successful Rajput cavalry just above the gun (which is my tempo marker) and the only lightly engaged centres and near wings of both armies sitting waiting just out of range of each other. The second Mughal elephant (with the shaken marker) is top centre having been brought to a standstill by the Rajput cavalry.

At the same time as running the battle, I was also reading Gommons’ book on Mughal Warfare (Gommans, J., Mughal Warfare (London: Routledge, 2002)). This throws up some problems with the DBR army lists for the Indian subcontinent. The main issue is that Gommons insists that the Mughal army remained, into the eighteenth century, one based on heavy cavalry and light horse archers. Now, of course, he could be wrong, and I intend to look into it, but there is very little light horse in any of the DBR Indian army lists.

Now, I do not want to be too harsh on the army lists. They were published in 1996, while Gommons’ book was published in 2002. On the other hand, in the early years of the Mughal conquest of India, the army was a more steppe one and that would be exactly a light and heavy cavalry combination. Gommons’ contention is that the military revolution in gunpowder weapons did not really happen in India until the eighteenth century, although the Mughals exercised a form of mobile power, moving the court around so the emperor could keep an eye on things and people.

There are a few other issues with the lists. Gommons observes that elephants became less used in the seventeenth century, possibly as a result of countermeasures related to gunpowder weapons. The DBR lists classifying zamindar and mansabdar cavalry also is not something that the Mughals would necessarily have recognised. Zamindars were nobles (a western term) with fixed land holdings, while mansabdars were nobles with non-fixed land holdings. These latter were often in places which had not been conquered, to encourage military activity. Gommons notes that the increasing transfer of mansabdars to zamindars meant that the Mughal Empire became increasingly localised and regionalised, which had disastrous consequences in the eighteenth century when it essentially broke up.

Overall, then, it seems that the DBR lists for India are a rather poor guide to the warfare of the era and continent. This is a pity, of course, and I shall have to look deeper into my resources to find some more horse archers to have another go. It does, of course, raise the question as a wargamer of whether it matters. If the armies are not strictly representative of sixteenth or seventeenth-century armies, the battle and the armies are fictional. The battle was fictional anyway, so why not declare the whole thing an imaginary nation with imaginary armies. I suppose the answer to that is how much emphasis we put on the word ‘historical’ in ‘historical wargaming’. We can never recreate history, of course, and anyone that wanted to exactly recreate a battle should be confined to a nice, softly furnished room, but how historical does historical have to be before were are entirely wargaming something that is fantasy, albeit with a dearth of elves, dwarves, magic and other such accoutrements. I am not sure, but I am still going to work on the army lists.
Posted by The Polemarch at 02:00