As the regular reader (and there is only one, especially given that it is August and everyone seems to be on holiday) of the blog will know, I have been digging out old soldiers and rebasing them. Overall, it has been a slightly strange experience. Some bases I have pulled out of their drawers (I mean storage, of course. Stop that snickering in the corner), and greeted like old friends. I have not seen them, I would estimate, for over 15 years, and yet I know exactly who they are, what they are and how they behave. Others, of course, I have to sit and puzzle over, and, occasionally, resort to my army lists (DBR 100 AP armies) to establish exactly what the troop type might be.

The first fruits of the rebasing project are now finished and downstairs in the snug. These are the Poles and the Muscovites. The point of the project is not just to rebase all these toy soldiers. Remarkably, for me at least, the idea is to have a few wargames as well. Thus, the creative juices of the wargamer were set to devise a scenario with narrative potential involving the aforementioned armies, namely early modern Poles and Muscovites. Fortunately, as any wargamer will know, these two armies spent a fair bit of the early modern era at war.

The upshot was as follows. 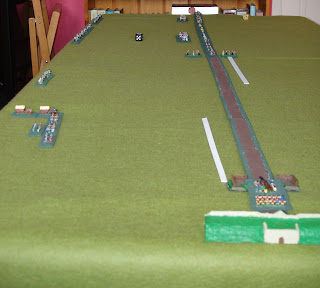 The picture shows the edge of a recently built Russian town and fort complex, Tsarputinsberg and part of its outer defences. The garrison consists mostly of expendable ‘Western’ mercenaries that are armed as conventional pike and shot. These are operating the heavy cannon in the earthworks and providing a base of arquebusiers as back up.

The building of the fort and town has not gone unnoticed, and it has been under fairly desultory siege by a Polish Commonwealth army for a while. Tsarputinsberg, therefore, could do with some resupply, and you can see the convoy on the road. It is escorted by a Muscovite army consisting of mounted Boyar cavalry, some infantry (including a couple of bases of Streltsi) and a few Cossacks. The convoy consists of 14 bases of assorted wagons, pack horses and mules.

Naturally, the Poles would prefer that the convoy did not arrive, and so have moved some of the besieging army around the defences to intercept it. They have just broken cover, to the left, the Hussars (far end) and Pancerni (middle distance) riding over the hill in the best traditions of Taras Bulba. Actually, in the best tradition of the only bit,I think I remember of the film, which consisted of (I suspect) Yul Brenner waving forward a long line of Cossacks over a hill to charge, well, someone. Memory does not serve as to whom, and although I have read the book (which isn’t great, as I recall, although 19th Century Russian literature is not my thing) is, I suspect, rather different from the film.

Anyway, the Polish plan is to block the road just out of artillery range of the fort with the war wagons (you cannot have an early modern Polish army without war wagons and Hussars, now, can you?) supported by the infantry you can see in the left foreground. Meanwhile, the cavalry will attack down the hill, seize the convoy and all will be well with the world. The Muscovite plan is to block the Pole for long enough for at least half the convoy to get to safety.

I do not know if it is just me, my rule or wargaming more generally, but ambushes are very difficult for the defender to succeed at. I noted before that under my Polemos: SPQR rules the only way I had found for the Gauls to win was to ambush the Romans. The same sort of thing happened here. 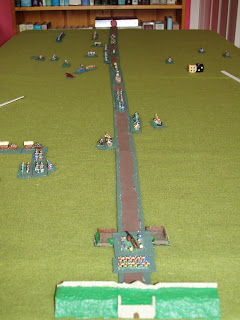 The picture shows the battlefield at the end of the game. You can see that parts of the convoy have been captured and the rest will shortly follow. To the right are the fleeing remnants of the central block of Boyars. Even if the Muscovites had held on a bit longer, it does not look as though any of the supplies will get through.

So, what happened? If you look closely you will see that the Hussars have not moved, and nor have the far block of Muscovite cavalry. This amused me no end. The Hussars, as we know, are the original class ‘A’ loonies under the Gush WRG rules, or ‘T1M1’ under Tercio. The sort of troops I could never afford on my original schoolboy wargaming budget. Here, they pick up a plus one in the rules for being self-proclaimed elite troops, and another plus one for being uphill of the enemy.

An awful lot in the rules depends on timing, seizing the tempo at the right moment to get your charge in. The Muscovites did that and the central block (together with the general, who went down fighting) bravely charged uphill, outnumbered, at the Polish pancerni and, after a swirling cavalry action, lost, as you can see. The Boyar at the far end quite sensibly, in my view, refused to charge the Hussars uphill. In the Polish bound, rather to my surprise, the Hussars refused to charge the Boyars, even though they are elite and were uphill. Dice can be odd things at times. The Muscovites were quite happy with this result, as you can imagine. Presumably, the Hussars did not want to get their lances dirty, or something.

Anyway, that situation lasted for the whole game – the Hussars failed to charge at least three times. As you can see, even at the end of the game, the stand-off continued. The battle was won and lost in the middle, where the Muscovites fought bravely but numbers usually tell in cavalry actions and they were always outnumbered.

As a scenario it was rather fun, but ambushes do seem a little one-sided. I could have moved the road further away from the hills, but I suspect that would have only delayed the result. Perhaps the Russian deployment was a bit flakey; I could have got the infantry into action sooner if they had been deployed within the convoy, rather than at the front. But then the war wagons would probably have blocked the road, so again, I am not sure.

Anyway, next time, the mercenary garrison had better try to break itself out for the place.
Posted by The Polemarch at 02:00