Don Pedro look dubiously at the liquid in the tankard placed in front of him. Apparently, it was better and safer than the water. Feeling extremely brave, he took a sniff and a sip, trying to hide the wrinkling of his nose from his anxious hosts. If that was better, the water around here must be pretty terrible. But he sat back and smiled. Some of the tension slipped away, but Don Pedro still rather wished he had taken the hospitality offered by the Manor House rather than the local tavern.

Still, it had been a successful, if long and hard fought day. The English had bought some guns with them this time, and had stood and fought. Deploying under artillery fire had proved to be nearly too much for his novices, and the initial idea of a flank attack on the town via the Park had bogged down, or rather, never got off the ground at all. It had taken ages for the cavalry to turn the left flank of the English position, and that had only been possible due to Captain Trousdale’s treachery. Trousdale was now, hopefully, enjoying Mass in the ruins of the Priory. Still, Don Pedro leant back and hazarded another sip of the ale. Tomorrow they must try to find out where the real English army was. 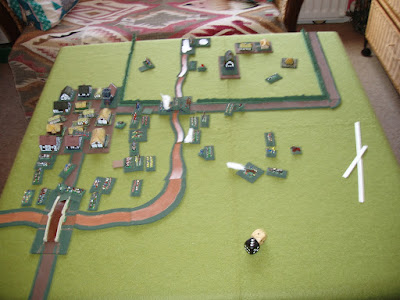 The picture shows the situation at the end of the battle. Don Pedro is centre right, encouraging his infantry to form up again and advance. The Spanish artillery to his left has recently come into action and, the English artillery (there were two bases thereof) has been silenced. You can see the fire fight on the bridge, or at least, the English shooting rather ineffectively and the Spanish pikemen, who have taken over the assault from the arquebusiers who you can see shaken on the road, advancing. 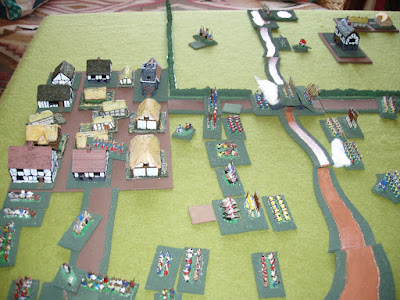 Here, a closer view of the fighting around Chapel Beck Bridge is seen. The bridge itself is just out of picture, a little closer to the camera. Trousdale is to the left of his men, who were the only base on the ‘Spanish’ side of the bridge at the start of the battle. The other six bases of militia were on the Guisbrough side. You can see the Spanish cavalry running riot in the rear of the English position. The Gendarmes (with a terrain shaken marker towards the centre of the picture) have just charged some yellow coated English pike (having recoiled the arquebusiers). To their left some demi-lancers have just disposed of one of the English guns. Between Trousdale’s men and Guisbrough another base of Spanish demi-lancers lurks threateningly against the English reserve bill and bowmen in the centre foreground.

This is the point at which English morale collapsed. You can see a base of billmen fleeing into Guisbrough; the English demi-lancers have already left the table, having been charged in flank by the Gendarmes after dispatching some treasonous militia men. The loss of the artillery base and some bad dice rolling put the English into ‘withdraw’ mode. The Spanish, again, did not lose a base, but the battle was a lot closer than the score line suggests.

The action was enjoyable, and I learnt quite a lot about the rules. Artillery seems to be a bit on the powerful side. They did not cause any casualties but certainly disrupted the Spanish infantry advance in the centre. What was originally a three wave attack of mixed pike and shot turned into a few bases making piecemeal advances, solely through the effects of artillery fire and bases recoiling. I might need to downgrade the artillery ranged combat factor (currently 4) a bit, or mess with the combat results table. The effect was, possibly, a bit overwhelming.

The original Spanish plan was to cross the Park with skirmishers to outflank the English. Perhaps wisely, Don Pedro declined to commit many resources to this effort – only two bases, as can be seen in the top part of the photos, and these were held at bay by the English border horse. The main Spanish effort came from the cavalry who rode around the battlefield, made contact with Trousdale, established his loyalties and then crossed the bridge to wreak havoc. The rest of Trousdale’s men fell out among themselves – the loyal English militia eliminated the treacherous ones just before the Gendarmes struck, but were then left without room to manoeuver or orders.

The other issue for both sides were tempo points, or rather the lack of them. Neither commander, after bidding for points, could actually achive very much. Mostly, Don Pedro got troops moving using his personal point. The English general only really used tempo to get his reserve moving in an attempt to stop the Spanish outflanking manouver.

This was probably a rather more complex game than my usual ones, and, for most of it, it seemed like the English were going to frustrate Don Pedro, if not actually defeat him. The combination of Trousdale permitting the Spanish cavalry to cross the bridge, and their arrival in the rear of the English position was devastating. On the other hand, the English defence was a bit on the passive side, relying on the artillery to sufficiently disrupt the Spanish to allow their infantry to be picked off as they apporached the stream and bridge. It nearly worked, but more attention should have been paid to the defence of Chapel Beck Bridge.

As for Don Pedro, I think he should have kept his skirmishers in hand and deployed behind them, protecting his infantry from the English artillery for as long as possible. The assaults on the bridge may then have been better coordinated and the whole thing a little easier.

Now, I have to decide on the next battle. The next Abbey is, in fact, Mount Grace Priory, just as the road turns south into the gap between the North Yorks Moors and the Dales. On the other hand, there is a very tempting bridge and confluence at Stokesley, the defence of which could be interesting but, perhaps, a bit like Guisbrough. We shall see, but at this rate, I am going to need a 6 mm James Herriot figure.