Despite all the pseudo-academic-ising which has been the lot of readers of this blog over the past couple of weeks, some wargaming, or at least, some painting and terrain making has been proceeding, in fits and starts, in the background.

Those of you with long memories may recall that the object of this activity is the second battle in my ‘Abbeys’ campaign. The first was the landing of Spanish troops on the open beach north of Whitby, which, as the Spanish commander Don Pedro noted, was rather a lot easier than he, or anyone else really expected. The English militia had, more or less, simply run away.

Not daunted by unexpected success, Don Pedro got his troops and equipment unloaded and Roman Catholic masses said at the partially ruined abbey on the hill overlooking the port. He then proceeded inland, determined to exploit his success. The road inland proceeded over the moors which would have been unpleasant in winter, but in August were merely an inconvenience.

As related in an earlier post, a ‘captain’ of the local militia has offered to hold “Guisbrough Bridge” for the Spanish, allowing them to capture the town, which is the next objective and also has a ruined priory. It is Don Pedro’s aim to brush the English militia army aside and celebrate mass in the ruins by evening, aided by Captain Trousdale and his merry men.

The terrain for the engagement looks something like this: 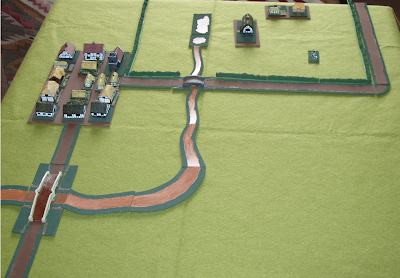 This is the view from the west of the battlefield, looking east, that is. Guisbrough Town is self-evident in the left centre. This is where the English army is billeted. The Spanish will enter from the top right corner, slightly cramped between the hedge which marks the boundary of the Priory Park and the woods and hills which are slightly beyond the southern edge of the table.

The creation of this terrain has taken some time. The short stream sections, ponds, short river sections, bases of the bridges and shorter road sections are all new. The houses at the near and far end of Guisbrough itself, plus the church (St Nicholas) are also new, obtained in early February and finally painted by me (finished, at least) yesterday. The Manor House in the Priory Park is also new, of the same batch and vintage. These are all Leven Miniatures and very nice they are too. However, I think I erred in undercoating the timber framed buildings in black, as painting the wattle and daub bits in white was fiddly and I then had to go over the timber frames again. I also know that, originally, black and white buildings were not necessarily black and white, but other colours do not really look right.

The other buildings are Timecast and old Baccus hovels, with a Hovels barn on the home farm in Priory Park. The cart lurking behind the farm hovel and the cows in the Park itself are Irregular. The hedges are by a company I forget, I am afraid, and are quite elderly. I bought a pack of ‘bocage’ hedges from them and was rewarded with an enormous number. I have now painted and mounted some of them (so they are at the same height as the roads). I still have a fair few left.

The observant reader will note the existence of two bridges. Captain Trousdale is guarding the near one, which he described as Guisbrough bridge but which is on my 1840’s map of the area as Chapel Beck Bridge. This too is an old Baccus creation. The other bridge is not graced with a name on my map but does exist still. I doubt if the stream turning to a river was called Chapel Beck in the 1580’s (although it is possible); I would imagine it was originally called Priory Beck as it seems to have its origins in the ponds in the Priory Park which would, I suspect, be used to supply fish for Fridays. 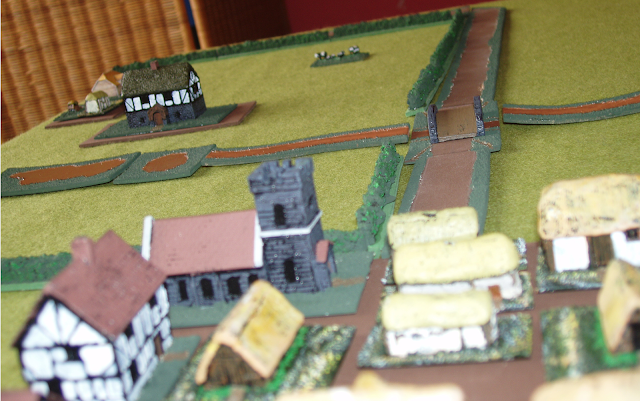 Aside from that the Spanish seem to have two options. The first is to assault the bridge directly into Guisbrough. This might work and the Spanish are certainly confident enough (or dismissive enough of the English) to try it. Alternatively they could march across the face of the English and try to link up with Trousdale’s men deployed at the other bridge. This would both outflank Guisbrough and cut it off from the rest of the country and reinforcements. The English are (probably) unaware of Trousdale’s treachery. Mind you, it might not exist and his men might not agree.

As you can probably tell, I am rather pleased with the look and feel of the battlefield. I have no particular reason for this, except, I suppose, that it is rather better than my usual efforts and it is something I have given time and energy to. In this sense it is a result of ‘craft’, as Yarwood’s paper discussed. The bits of the battlefield are bought, but I painted them, made some of them, and pulled the whole lot together. I claim the rights of mixing my labour with that of the manufacturers of the buildings, figures and other pieces.

Beyond that, there are the effects of miniaturisation. My 1840’s map puts Chapel Beck Bridge quite a lot further from Guisbrough than it is represented here. The ruins of the Priory are just to the east of the table; the Priory Park would probably have been delineated by a wall, not a hedge. And so on. The relation to reality is a bit vague, yet it is, in my head at least, recognisable. This brings us around, I suppose, to the question of the balance between the game and the real. This is even more pointed in this case where the location is real but the battle is fiction. But that might be a question of another post.