One of the best bits of graffiti I ever heard about appeared, briefly, on the wall of the Ministry of Defence in London: “Military Intelligence is a Contradiction in Terms”. It was whitewashed over very quickly, apparently.

It has to be said, however, that the intellectual climate of the world often does impact on the military view of things. For example, take a look at this painting of the Battle of Fontenoy:
http://www.rentgenypolska.pl/sec_Plik:Battle_of_Fontenoy_1745_1.PNG.HTML 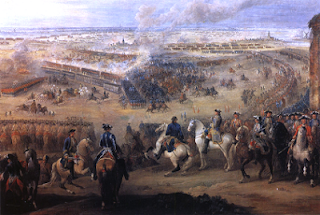 There are a lot of things that could be said about this, but mostly I want to concentrate on two things, which John Lynn observes in ‘Battle’ (Westview, 2004).

Firstly, have a very close look at the action in the background. Does anything strike you as odd?

Despite the smoke, shooting, cavalry charging in and so on, no casualties are depicted. None at all. This is a battle without blood.

Secondly, have a look at the formations in the background. They are all perfect linear shapes. So much so that this is called the age of linear warfare.

It is all so scientific, so rational. So reasonable. So…enlightened. And this is Lynn’s point. The military discourse during this period was heavily influenced by the Enlightenment. The Enlightenment itself was heavily influenced by the invention of modern science in the late seventeenth century. Culture itself began to believe that everything, from God to the trajectory of cannon balls, was predictable rationally.

For example, this was the heyday of Deism, the idea that the universe was clockwork, and the deity had simply wound the clock up and left it to run. This is not exactly orthodox Christian belief, but it did allow many thinkers, who would otherwise have been thought to be atheists, to get away with carrying on thinking their thoughts.

Lynn’s argument is that the Enlightenment also had influence on military thinking. This arose, partially, from the engineer Vauban, who could, it is claimed, predict the whole timetable of a siege from the opening of the trenches to the fall of the citadel. The whole siege worked like clockwork, and maybe you are now starting to see the influence of rationalism and Newtonian mechanics on warfare.

If this approach works for sieges, why could it not work for battles? After all, a battle is only really a messy siege, a siege without convenient lines and trenches and artillery batteries. Even, from one point of view, a battle is simply a siege without a necessarily clear end. And so we come back to the painting of Fontenoy above. Nice clear lines, and scientific approach to battle and none of that horrid blood and gore and randomness which gives battles such a bad name.

Another point that Lynn makes is that battles were rather frowned upon. We may make much of them, but that is possibly because we are military romantics, by which I mean we think about military activity under the influence of romanticism. One of the hall marks of romanticism in a military sense is the quest for a decisive battle that puts an end to the war, a sort of Napoleonic and Clauswitz-ian view of the military world.

I have argued before, I know (and been argued against) that battles are not that decisive through most of our history. Certainly, the leading generals of the Enlightenment period (by which I mean the late seventeenth century up to the French Revolution) did not really actively seek battles. In ‘Marlborough as Military Commander’ (Military Book Society, London, 1973) David Chandler lists ten battles at which the Duke was present (not all of them at which he was in command, e.g. Sedgefield) and twenty-nine sieges. While Marlborough could be described as a master of battle, he did not actually engage in many.

Lynn observes that neither Saxe nor Frederick of Prussia really sought battle, either. Saxe was a bit like Marlborough; he fought a battle if he judged it to be advantageous. Frederick fought a lot of battles, but they were not really decisive, in that they did not knock his opponents out of the war, they simply delayed the assault on Prussia proper, while other aspects of alliance politics and campaigning took their course.

Finally, Lynn also observes that fashion must have been a bind to the ordinary soldier. He questions how much easier the deep folded cuffs of the eighteenth century soldier made loading a smoothbore musket, and concludes that it must have been an encumbrance. He also notes that the seventeenth century wide brimmed hat at least gave some cover from rain and sun, and questions the tricorne’s utility for doing the same. The folded up from brim cannot have helped protecting the wearer from the elements. The ordinary soldier of the eighteenth century was, on this view, a fashion victim.

How does this affect us as wargamers?

Well, firstly, I do think that we have to take account of Lynn’s ideas. We talk about linear warfare, but in terms of the Enlightenment, it actually means something, a distinct world-view that does affect how battles were fought.  War and culture interact with and reflect each other. In terms of writing wargame rules and painting soldiers, we need to be aware of the cultural and intellectual background of the period.

And that, perhaps, is the final point, one which I have made a number of times before. There is no such thing as an all-encompassing wagame period. The temptation is to lump all warfare from the demise of the pike on the battlefield to the advent of the machine gun into one period, call it ‘horse and musket’. This is, of course, technological determinism. We seem to believe that two weapon systems, the flintlock musket and the cavalryman, determine the way warfare happens for a couple of hundred years.

However, I hope I have managed to suggest that this is not so. What counts in addition, possibly in fact more importantly than the technology, is the discourse of war. By this I mean ideas of what a war was about at the time. If your thought runs in lines and Newtonian mechanics, then you land up with linear warfare. If it does not, then you get something else, albeit with the same technology.