I read somewhere, on a blog, someone worrying that they struggled to start a campaign game, even solo, because they were concerned as to how to transfer from a general map to a battle field. I thought, therefore, that explaining how I managed it in Fuzigore might help. Of course, there are many ways of doing this, and mine is just one; at least I am recording it for my own posterity and later edification here, now, even if no-one else’s (and what is a blog except for one’s own edification, anyway?).

The first thing you need is a campaign map, of course. Here is mine for this Fuzigore campaign in Cillag (real world Gaul, in case you’ve not worked that out). 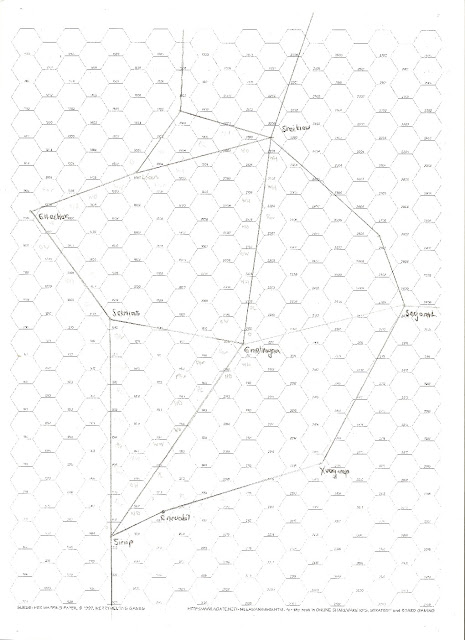 I was fortunate enough to find, a few years ago, some blank hex maps on the web (by Merrymeeting Games, I cannot find it now) and I’ve got a whole pile photocopied. You do not necessarily need hexes, but some sort of grid referencing helps in case you drop the map and all the counters or pins fall out. The map here is based on a bit of real world France, by the way, but no terrain initially was known.

The two sides were based respectively at Sirap, in the south (Ht-ous) and Sreitiop, to the north east (T-sae). Terrain in each hex was determined by a double dice roll. The first roll was the dominant terrain (1-3 open, 4, 5 wooded, 6 hills) and the second (on the same scale) was the secondary terrain type. Thus, each hex that was passed through received two letters, such as OW for open with woods and HO for hills with open. A rolled double gave an extreme of the type, so a double 4 got forest, while a 4 and a 5 got a double woods.

The army commanders were given a rating each. Xeorg, for Ht-uos was average and cautious, while Nierev was poor and cautious. At this point I did wonder if there would be a battle at all. The ratings came from  CS Grant’s Wargame Campaigns.

The two sides had to roll under a command roll, (I’ve not written that down, but I think it was 30% for Xeorg and 25% for his opponent) to move.  Random rolls for the army compositions give Ht-ous with 10 bases of tribal foot, 6 cavalry and 4 skirmishers, while the T-sae got 14 foot, 3 cavalry and 3 skirmishers.

After some uncertainty and messing around,  (31 days of it, to be exact) the two sides clashed in hex 1409, which is between Setnias and Ellerhor, on the middle left of the map. This was after a forced march of the Ht-ous army to make sure the enemy did not capture Setnias, followed by a chaotic retreat from it when Xerog fumbled a command roll, leaving their cavalry high and dry in contact with the enemy. Fortunately,  Nierev then fumbled his command roll, allowing the Ht-ous cavalry to disengage.

The road actually runs along the edge of hex 1409, which was a plain (open-open double roll), which suited the cavalry heavy Ht-ous army well. The T-sae however, wanted more enclosed terrain, so I drew up the map across the hex boundary. 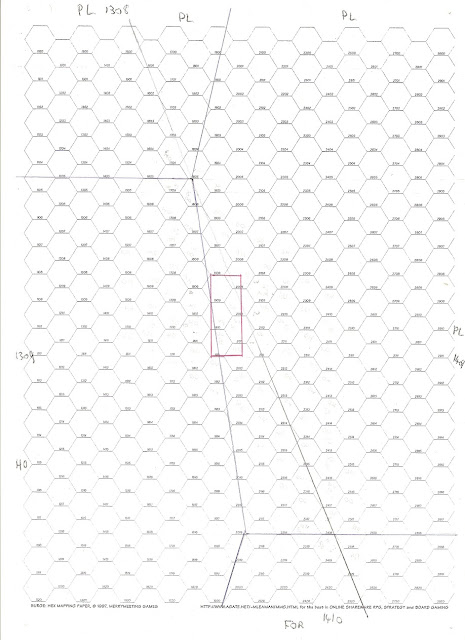 Now, here I had to do a bit of calculation. My table is 150 by 60 cm, and so is 37 by 30 bases, or 7400 paces wide.  The map is 21 by 19 hexes, and so I decided that the stacking limit for each hex would be 10 bases, excluding baggage and generals, and cavalry would move 2 hexes a turn, or 2/3 of a table width and infantry would move one. A map move would therefore by 4 table top turns; three turns plus a night move would constitute a day.

Tempo points were introduced at this juncture. Nierev got a -1 on his roll for being poor. The orders were lost overnight, just to make things a bit more difficult.

The terrain in each hex was determined by the overall terrain, with two dice rolls to determine exactly what was in the hex. So the Plain hexes got 1-4 as open, 5 as hill and 6 as wood, with a double on the open giving a settlement. A double on the others gave a stream. It was similar (although obviously different) for the HO and For hexes.

I also introduced weather on this level, using an idea pinched from Wesencrafts’s With Pike and Musket, which allows it to vary. However, in this case it had no effect.

Eventually, the armies clashed, roughly in the centre of the map (the table is the box marked above). Both commanders had been trying to get their own way with the terrain, and in doing so had managed to rotate their battle lines by 90 degrees.  Further, the Ht-ous cavalry started the deployment all on the right, and had to be frantically reorganised to deploy equally. 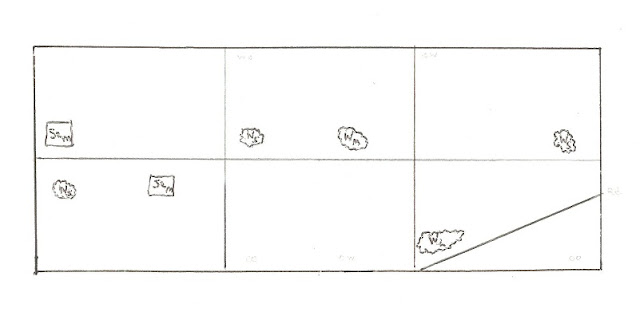 The Ht-ous are coming from the bottom (east), and their line of retreat is to the left, south. T-sae are, of course the other way around. Hopefully, the map conforms to the terrain photographed a few weeks ago. It was generated using the knowledge of the terrain in the hexes and some more dice rolls. With two settlements, you can see I was rolling doubles.

So, there you have it, progress from the strategic map through a tactical map to a battlefield. It really was not too painful. The rules and maps are scribbles on paper. I've gone over the salient points in black ink to try to make them scan decently. It has probably taken me as much time to type it up as it did to run through the process in the first place, so if I can do it, why not anyone else?
Posted by The Polemarch at 02:00