It is traditional on this blog (where tradition means I have done this twice) to have a shorter and lighter post the week before Christmas. That being this week, I have decided to put everyone who has been reading my terrain troubles posts out of their misery, or, at least, prove that I have tried to tackle the problem.

For those who have missed it, the trouble with wargame terrain is that it needs to be functional, aesthetically pleasing, match the scales of both the figures and the rules, and be, at least for those of us who do not have a permanent set up, easy to put together and to take apart.

That is quite a tall order.

Over the last few months I have been working to update and upgrade my scenery  and the results are in two crummy pictures below.  The first is the first Fuzigore battlefield from the south. 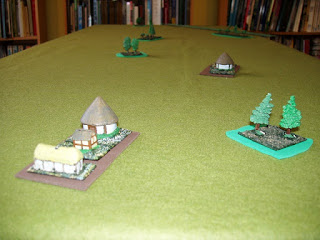 The second is the same from the north. 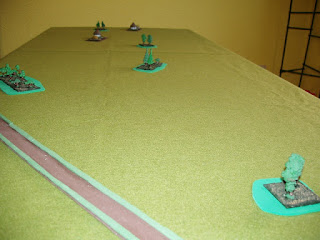 The trees are by Irregular (I have had them for years, just not based them until now), the hovel building is from Baccus (who no longer makes them), the roundhouses by Timecast. The wood, settlement and road bases are by me, from bits of thin craft foam, which has worked surprisingly well. Of course, the road is Roman, and so straight, which helped…

All in all, I think that this is an honourable conclusion to the terrain thing. The battlefield took less than ten minutes to set up and less than five to put away, it looks reasonable and to scale with the figures and ground scale of the rules, the edges of the features are well defined by the foam and it looks the part, to me anyway (you will have to believe me; photography is not my thing either).

Now, posts to this blog are usually about 1000 words long. A picture, they say, is worth 1000 words. I have two pictures here, so this post is way over length already, plus the fact that I have 30 casualty bases to finish, another 15 to paint, plus 10 bases of civilians, four ox carts and a pile of pack mules of unknown height before I can actually wargame this battle.

So I shall just wish you all a happy Christmas, and get my brushes out again.