The Vindication of Epaminondas


As you probably already know, it is not the policy of this blog to present eye-candy. Mind wrenching applications of philosophy to wargaming, yes, but a feast for the eyes, no.

However, the fact is that this blog was originally intended to help me record ideas for writing a set of wargame rules for the Classical Greeks. Having just finished painting two 20 base armies of Greek hoplites and reading the Landmark edition of Xenophon’s Hellenika, I decided to have a wargame bash.

Now it has to be said that there was nothing complex about this. The two armies formed up, charged, fought, one side lost and the other won. Mind you, that sums up most hoplite battles, so far as I can see, particularly in the earlier period.

So, here are the initial dispositions: 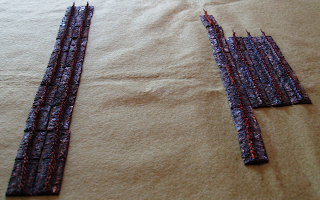 The Alphon plan was to do a Marathon, hold the centre while winning the flanks, while the Omegrons were hoping to crash through the centre and win big enough there.

This being a Polemos playtest, Tempo die were rolled and the Alphons won, and advanced along the line (I’ve not worked out any blocking rules yet to stop this, not do I particularly think this is needed).

The next turn the Omegrons won the tempo and closed in, and at the start of the third turn whoever won the tempo was going to get the initial advantage in contact. The die rolled, the head craned, the tempo bids were entered and Omega got the nod.

Starting with the leftmost (to him) hoplite block, the Omegron player proceeded to lose the first roll so spectacularly that the first four deep column was recoiled. Subsequent rolls went more to expectation, and the three other central Alphon blocks recoiled shaken. On the flanks, the two deep Alphons repelled the Omegron flank guards.

The small bases, incidentally, are shaken markers, indicating that the Alphron centre is in some disarray.

In the centre, the Omegrons followed up their successes. If the Alphrons could sieze the initiative now, then they may well defeat the flank guards and turn on in the enemy main phalanx. Alas, fortune was against them. The Omegrons kept the initiative and, this turn routed two of the shaken Alphron blocks. Alphron morale stayed good, however, as they expected fortune to change.

Tempo rolling the next turn was very close, but the Omegrons held on to it and the bidding meant that the Alphrons had no tempo points to do anything. Inevitably the Omegron phalanx exploited its success further, and another column of the hard pressed Alphron centre fled. 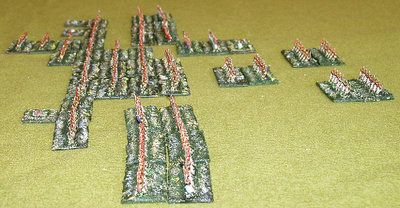 Morale still just about held up, however, but the next turn the last of the Alphron centre joined their colleagues in heading for home, leaving Alphron morale at ‘hopeless’ and ending the game.

As a rule writer, what did I learn?

Firstly, there were no generals and so no extra general tempo points. The initial plans had to be stuck to, as there were never enough points to change anything. The result of this was that the Alphron flanks and the recoiled Omegron leftmost centre column did very little after the initial clash.

Secondly, the battle was fast and furious, and took just over 40 minutes to complete. Of course, it was a very simple and solo affair, but hoplite battles are supposed to be so.

Finally, according to this result, the Theban general Epaminodas was entirely right. Depth is important to these clashes. The 4 base deep Omegron phalanx cut through their two base deep opponents like the proverbial knife through butter.

On the other hand, perhaps I had better finish painting those peltasts.
Posted by The Polemarch at 02:00